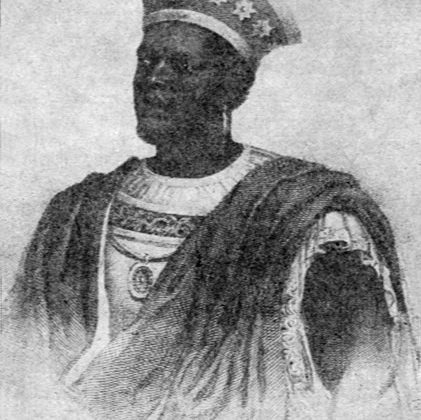 by James Loehlin
The first recorded performance of Shakespeare’s play Othello, the Moor of Venice, was on Hallowmas Day, November 1, 1604 (409 years before the launch date of this website). The play, written by one “Shaxberd” according to the court records, was performed at the Banqueting House at Whitehall by the King’s Men, Shakespeare’s own company, now under the patronage of the newly-crowned James I. We know that the original Othello was Richard Burbage, Shakespeare’s leading actor, who also created the roles of Hamlet and King Lear. We can presume, from a contemporary illustration of a Moorish character in Shakespeare’s Titus Andronicus, that Burbage played the role in some sort of blackface makeup, to suggest Othello’s race. There were some people of African or Moorish descent in London at the time, including some high-ranking ambassadors to the Tudor court, but they were few, and considered foreign and exotic. The accounts of productions from this period, however, focus not on race but on emotion; a funeral elegy refers to Burbage’s performance as “the grievèd Moor,” and an eyewitness account of a production speaks of the tears aroused by the boy actor who played Desdemona.
Othello remained a popular play in the Shakespearean repertory throughout its first centuries of existence. The title role always dominated the play (by comparison with more recent productions, which have given greater attention to Iago, Desdemona and Emilia). Othello was typically played with nobility and tragic dignity by the leading actor of the company. All recorded Othellos before the nineteenth century were white actors, though their makeup suggested a range of ethnic origins for Othello, from the Arab world to Sub-Saharan Africa. The greatest of these actors was probably Edmund Kean, the leading theatrical figure of the Romantic period in Britain. Lacking the neoclassical majesty of some of his predecessors, Kean changed the conception of the role, making Othello an explosive figure of passionate emotion. Though small of stature and weak of voice, Kean poured a frightening intensity of feeling into the role; he actually collapsed and died midway through a performance. The poet Coleridge said that seeing Kean act was “like reading Shakespeare by flashes of lightning.”
The first major actor of African descent to play Othello was Ira Aldridge (1807-67). Though he grew up in the US, he spent most of his career in Europe, where more tolerant racial attitudes afforded him the opportunity to play a wider range of roles—he achieved distinction as Macbeth, Lear, and Shylock as well as Othello. He also, to be sure, played a range of stereotypical black characters in low comedy; after Othello, his most famous role was Mungo, a drunken slave in a musical farce called The Padlock. But his Othello was highly regarded, especially on the continent, where he often played with local companies who spoke no English. His performances stirred discussion, not only about race and prejudice within the play, but about slavery in the US. Aldridge was considering returning to perform in America after the Civil War, but died in Poland before he had the chance.
In the twentieth century, Othello was one of the signature roles of Paul Robeson, who was a political activist and civil rights leader as well as an actor and singer. He played in London’s West End opposite Peggy Ashcroft in 1930, and on Broadway in 1943 opposite Uta Hagen. The moment when he kissed Hagen onstage was considered a shocking violation of taboo, but the production was a great success, and remains the longest-running Broadway performance of Shakespeare. After Robeson, it became more common for black actors to take the role of Othello, although Laurence Olivier gave a legendary performance in the part at the Old Vic in 1964 (a performance whose reputation is somewhat tarnished by the poor film adaptation). James Earl Jones and Avery Brooks were distinguished Othellos in the US; the latter in a production which also had a black Iago, played by Andre Braugher. A South African production starring John Kani as Othello made a significant social impact in Johannesburg during the last years of Apartheid. One of the last white actors to appear in the role of Othello was Patrick Stewart, who performed in Washington D.C. with an otherwise all-black cast, including UT professor Franchelle Stewart Dorn as Emilia. The National Theatre of Great Britain has just completed a production set on a modern military base, with Adrian Lester as Othello and Rory Kinnear as Iago. Its vivid depiction of hatred, jealousy and racism in an ostensibly “post-racial” setting demonstrated the provocative power this play continues to exert more than four centuries after its first performance.