My mother’s father was a Presbyterian gentleman, one of the early Houstonians bent on making blue-collar Houston into a more respectable place. That was back in the 1920s. He had come down from Kentucky with his actress wife, my Irish Catholic grandmother, to start an advertising business in one of the classic downtown Houston buildings, five stories with stairs, ceiling fans, and paper weights. In the Houston swamp where nobody wanted to live. Before air conditioning became a universal human right. For white people.

Granddaddy Wilkinson lived in a shingle house on Stanmore Drive in River Oaks. He prospered during the Depression and he made his own beer during Prohibition. After the war, he moved his family to a modern home in Tanglewood. He was a founding member of the Pine Forest Country Club. He played golf there and he ate gulf oysters in months spelled with an R. He loved to be served by “Negros” in starchy black and white uniforms. He called them “colored folks.”

Granddaddy was Joseph Barbour Wilkinson, JBW. His son, JBW, Jr., (a.k.a. Uncle Joe) was on an aircraft carrier in the Caribbean during the Cuban Missile Crisis.  He had a broken foot.  Uncle Joe was a fighter pilot, but he had fallen down the naval stairs. Even if World War III had begun, then and there, he would have had to sit on the bench. The Navy wouldn’t let him fly with a cast.

The company did publicity. Franke, Wilkinson and Schiwetz, which later became Wilkinson, Schiwetz and Tips. And associates.  Jack Valenti was an associate. He was younger than them. Valenti went on to do PR for the LBJ White House. He made his debut on November 22, 1963 on Air Force One at Love Field. 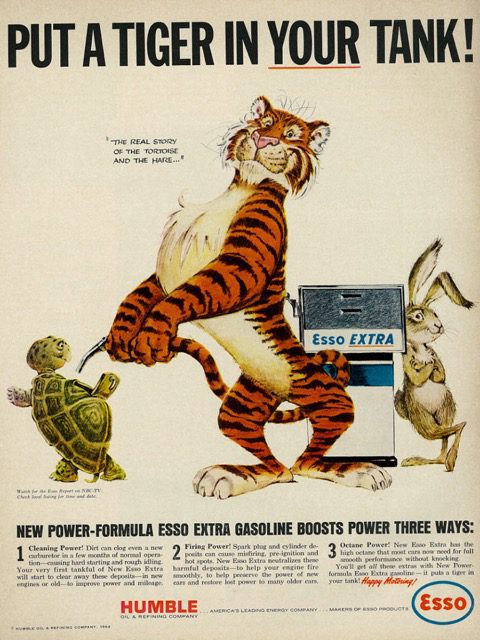 E.M. Schiwetz was quite an accomplished artist. And a Jew. Granddaddy Wilkinson was not fond of Jews but, for Buck Schiwetz, he made an exception. E.M. stood for Edward Muegge but Buck worked better for him, in Texas. He wasn’t a practicing Jew, of course, but he did have a Jewish name, and his daddy was a banker. And he could draw. A Jewish cowboy who could draw in South Texas needed an explanation.

Schiwetz was born 1898 in Cuero, Texas. Cuero sounds like it should be out in West Texas. Cuero means leather, as in dried out by desert wind and tumbleweeds, but it was really just a half hour’s drive from the Gulf Coast, south of San Antonio, near Victoria. That accounts for the fascination with seagulls in the sketches.

Schiwetz grew up drawing everything he saw. He consumed the world with his eyes, and it flowed right back out through his talented fingers. His momma was an artist. She did pottery. But his daddy thought that if he went to art school, it might turn him gay. Besides, there was no art school in Texas. So, Buck went to the engineering school at Texas A&M.  He learned to two-step to tune of the Cotton-eyed Joe. Then, he switched to architecture. And, became famous for his sketches of the Texas courthouses that were about to be torn down because they were old and Spanish-looking. Most have since become historical monuments. The sketches saved them from the ruthless wrecking ball of time.

Buck Schiwetz married his sweetheart, sculptor Ruby Lee Sanders, in 1926. They moved to New York in 1928. Buck studied etching at the Art Students League and he sold his drawings to very classy magazines. I have a sketch he did back then. It’s New York Harbor, dated 1929. 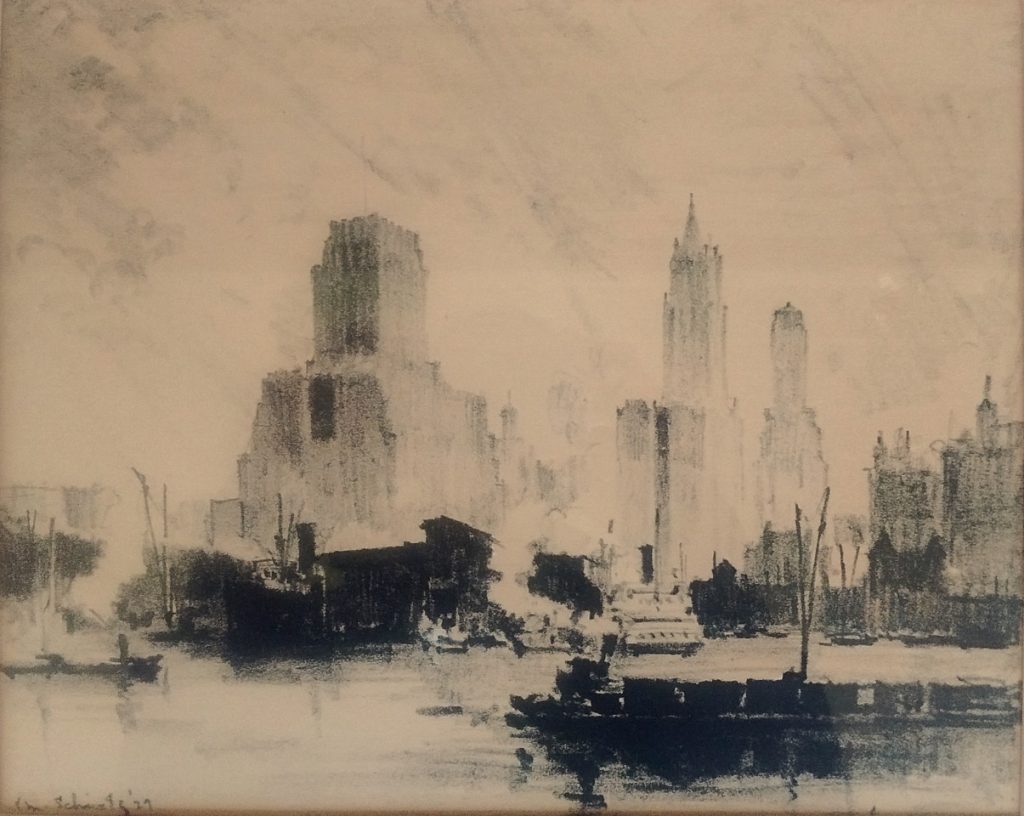 When the Stock Market crashed, the couple returned to Texas. Buck became a partner at Wilkinson, Schiwetz and Tips. That was where they created the Tiger. You won’t find that in annals of art history. It was part of an ad campaign for Humble Oil and Refining, the Texas component of a de-monopolized Standard Oil empire. Rockefeller and them.

Humble Oil and Refining was based in Humble, Texas. It was anything but humble. It became Enco, then Esso, then Exxon, and then Exxon-Mobil, which now runs your life and determines your desires, feelings and political inclinations, whether or not you choose to accept it.

And, they still use the Tiger. Put a Tiger in Your Tank. It causes global warming; it’s melting the polar ice caps; but it will keep your car from turning gay on you right when you need it to man up.

Willa Cather wrote a story, The Sculptor’s Funeral, about Harvey Merrick, a famous  artist who died relatively young from what seems to have been pneumonia.  Before antibiotics. The coffin arrived on the train from New York, its occupant, honored with a golden palm leaf.  The sculptor’s apprentice was attending.  He had come to see his master home.

Merrick’s pupil expected to discover, in Sand City, Kansas, a delicate world of intense beauty, a warm seedbed for sensitive genius. Instead, he found a cruel cauldron of physical brutality and verbal aggression, a wild land where the artist had never quite managed to measure up. The watchers at the wake had no notion of the artistic stature their fallen homeboy.  They wouldn’t have valued it, even if they had.  Money and knavery. That’s what it was all about. Willa Cather’s understood. The Sculptor’s Funeral is a tribute to artistic madness.  In Kansas, you had to be out of your mind if you were obsessed with beauty and truth.

All this raw, biting ugliness had been the portion of the man whose mind was to become an exhaustless gallery of beautiful impressions—so sensitive that the mere shadow of a poplar leaf flickering against a sunny wall would be etched and held there forever.  Surely, if ever a man had the magic word in his fingertips, it was Merrick.  Whatever he touched, he revealed its holiest secret; liberated it from the enchantment and restored it to its pristine loveliness.

I suspect that’s how it went down for Buck Schiwetz in Texas. Cuero wasn’t far from Sand City, in that sense. In fact, the first cattle drives from Texas to Kansas, back in 1866, began in Dewitt County. Cuero is the county seat.  Buck drew that courthouse, too.

And, yeah, he drew the Tiger. You won’t find that in the official biography. It was his Babylonian moment. Conscripted by imperial decree, the artist burned a pinch of incense on the altar of Humble Oil and Refining. To placate the fiery vortex at the heart of the Standard empire.

It wasn’t a big deal, back then.  Wilkinson, Schiwetz and Tips mostly did billboards and radio ads.  But the Tiger took on a life of its own.  It became a wild carnivore to be feared, fed, and loved.  And, eventually, sold.  McCann-Erikson just had to have it.

Granddaddy Wilkinson didn’t get much money for it, according to him. But it was enough to keep him in Stauffer’s frozen entrees and pay his dues at the Pine Forest Country Club until he died of lung cancer in 1975. Buck Schiwetz retired from the firm in ’66, when Granddaddy sold it to McCann-Erickson. He moved to a studio in Hunt where he sketched and painted ten hours a day while his wife did ceramics.  Hunt is in the Hill Country.  Near Kerrville.  It was perfect.

In ’68, the studio burned. There was a butane heater that exploded. No one was hurt, but all the artwork was lost. Buck never raged, though. My mother says he was a quiet man, very kind and good. Buck’s studio went up in one glorious conflagration, just one battle in the dark world’s total war on beauty and truth. That is the real war. The war that never ends.

Texas couldn’t quite handle its artistic homeboy. The land itself seemed to rebel. Texas was for oil, sweat, guns, and money. The studio fire was a case of diabolical arson. The hulking spirit of the Lone Star State with a pack of matches and a five-gallon can of gasoline. The Tiger, returned to haunt a gentle soul.

In the forests of the night,

What immortal hand or eye

Could frame thy fearful symmetry?

Just remember. The eyes of Texas are upon you, all the livelong day.

It didn’t matter to him; losing all the artwork, I mean. Buck’s favorite sketches were the ones he had yet to draw. He continued to draw and paint until his death in 1984. Those years, after the fire, were the happiest of his life.

15 Minute History Podcast: John D. Rockefeller and the Standard Oil Company
What not to wear to a Texas Barbecue, 1957
Family Outing in Austin, Texas