In The Power of African Cultures, Toyin Falola presents his wide ranging scholarship on the relevance of African cultural history to a general readership. 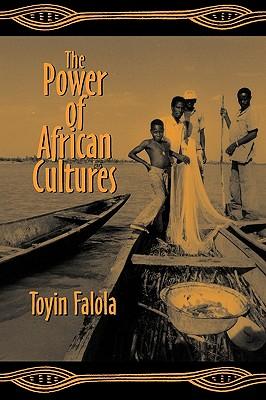 One of the book’s innovative aspects lies in its acknowledgment of the cultural experiences of continental Africans and Africans in the Diaspora in places such as North America, Latin America, and the Caribbean. Likewise, the study broadens the temporal horizon by demonstrating the enduring influence of African cultures on contemporary Africa’s political, economic, and social realities. Falola states that the major aim of the study is “to present the relevance of culture to Africans in the modern era.” Enormously ambitious in its scope, the study connects such significant themes as Africa’s economic development, religion, ethnicity, nationalism, language, migration, international relations, and gender to a cultural frame of analysis. The scholarship is marked not only by the different geographical borders it straddles, but by the author’s ability to take the reader with fluent ease through more than three centuries of Africa’s cultural history.

In his introductory section, Falola provides elaborate interpretative guidance to the trend of his analysis. Of particular relevance is the author’s definition of culture in relation to the African experience. Culture “is really the single word that explains and justifies most things, from the organization of private domains to complicated political institutions. Culture is treated as a package of social heritage.” The author emphasizes the heterogeneous cultural composition of Africa. One tantalizing element in the study is the focus on the ways in which Africa’s past traditions continue to interact with contemporary modern ideas brought about by colonialism. Using the Yoruba ethnic group as a case study, the book demonstrates how Africa’s indigenous political cultures continue to shape modern political frameworks. The Yorubas, at different historical periods, drew on long-held traditions and historical memory in order to position themselves as a powerful and social unit within Nigeria. Falola brings into sharp focus the negative effect ethnic nationalism has on the creation of a pan-Nigerian identity.

One of the chief achievements of this work is the treatment of some big historiographical questions that have dominated public and scholarly discussion in the field of African history: How can Africa use its cultural identity to develop? How can Africa develop without losing its identity? Can Africa construct progress without a vision of its past, or can it link its future development with its historical traditions? Can it ignore its legacies of domination in dealing with the wider world? What political ideology provides the best answer for solving Africa’s culture of underdevelopment? Can African languages and religious traditions survive in the twenty-first century? What strategies could be employed to ensure Africa’s cultural survival in the Diaspora? In response to some of these questions, Falola makes poignant recommendations throughout the study. He emphasizes the need to domesticate borrowed technological and scientific ideas; the need to adopt and circulate African languages; and the need for African leaders to come to a full understanding of economic and political calculations that guide Western interaction with African nations. Overall, The Power of African Cultures is a valuable and provocative piece, loaded with relevant information that will generate debates among readers with diverse interests. The author covers familiar and unfamiliar territories, and the meticulous analysis is particularly elevating and rewarding.