In 1617 King Phillip IV of Castile controversially elevated Teresa of Avila as patron saint of Spain, joining the current patron saint, Apostle Santiago the Great. Teresa de Avila (1515-1582) had been a sixteenth century Carmelite nun and reformer of the Carmelite Order. 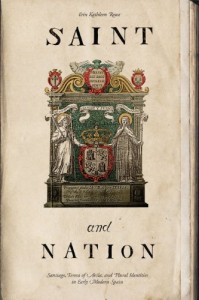 There is no doubt that in the early seventeenth century, amidst Spanish Catholic tensions with northern Europe, Teresa’s theological focus on heresy and the Counter-Reformation seemed relevant to the contemporary needs of Spain. In celebrating Teresa on a national scale, Phillip IV was also continuing his family’s devotion to Teresa, as his grandfather and father had campaigned for Teresa’s beatification and sanctification in Rome. Phillip IV’s appointment of Teresa as patron saint, however, triggered a fierce letter writing campaign led by devotees of Santiago. Santiaguistas wrote hundreds of letters from 1617 until 1630, when a Papal decision revoked Philip IV’s decree. The number of writers involved and the speed with which letters were exchanged in such a short period of time illustrates the dawn of new printing technologies that allowed wider dissemination of letters and pamphlets throughout Castile and the Kingdoms of Spain.

In Saint and Nation, Erin Kathleen Rowe investigates the arguments used by the Santiaguistas and the Teresianos in the letter writing campaigns of 1617-1630. Rowe demonstrates that these high stakes debates on sacred issues produced an early modern discourse on the nature and meaning of the Spanish nation. The letter writers asserted different types of geographical jurisdictions, national unities, and imagined communities by employing varying terms to designate the nation, such as: “Spanish monarchy” (Monarquía Española), Spains (Las Españas), Spain (España), Hispania (Hispania), The Crown of Castile (Las Coronas de castilla), and the kingdoms of Castile (El Reino / Los Reinos de Castilla).

Writers representing each saint sought to define the Spanish nation by drawing on their saint’s unique features. Santiaguistas argued that Santiago was already widely perceived as the patron saint of Spain. They argued that along with his popularity as a “Moorslayer” (Matamoros), who had heroically aided Castile’s centuries long Reconquista in numerous decisive battles, Santiago was also the founder of Christian Spain. According to his supporters, Santiago had converted the people of Spain to Christianity in biblical times. The fact that his martyred relics had travelled to Galicia upon his death, further illustrated his close affinity with and loyalty to the Spanish nation. Santiaguistas foresaw that sharing patronage threatened Santiago’s dominant position in Spain and vigorously argued that since Santiago perfectly represented Spanish history and nation, he should fulfil the role of patron saint alone. While the Santiaguistas were conservative in their claim that antiquity was the most important condition for patronage, Teresianos radically reconceptualised the nation by attaching importance to the modern over the ancient. They argued that because Teresa was both new and contemporary, she offered better guidance to the problems of the seventeenth century, such as the Reformation and Counter-Reformation. They argued that because Santiago was such an old saint, he could not possibly understand Spain’s contemporary woes. 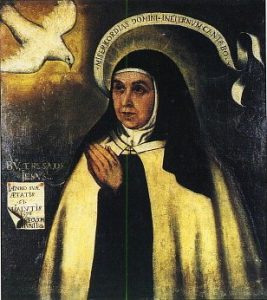 Copy of a 1571 painting of Teresa de Avila

Rowe provides a particularly interesting analysis of gender conceptions of the nation employed by the different writers. The Teresianos either represented Teresa as a female with male attributes, for example with military clothing, or as the perfect female companion to either the King or to Santiago the Great. Sometimes they represented the two co-patrons as married. Inevitably the Santiaguistas found such notions abhorrent and tended to criticize the idea of a female national patron, thereby conforming to Renaissance conceptions of gender. However when the Archbishop of Seville criticized the Teresa’s saintliness based on her gender and used a vocabulary with double meanings in sacred and secular life in order to represent her as less than respectable, he was sternly criticised by Teresianos who argued that the Archbishop had verged on heresy. 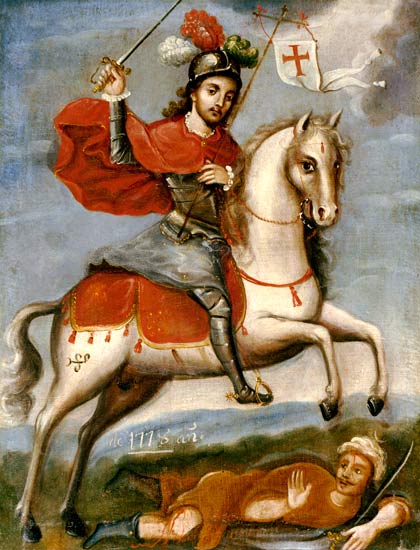 Rowe concludes that while this debate about the nature of the Spanish nation was multifaceted, it only represented the voices of intellectuals, politicians, and theologians in Castile. Those in the surrounding kingdoms, such as Aragon and Portugal, paid little if any attention to the “great debate” on co-patronage. While Rowe could be criticized for exaggerating the importance of the co-patronage debate and its relevance to definitions of early modern Spanish nationhood, given the complete lack of interest of those outside of Castile, the case study has significant resonance throughout Spanish history. Who exactly defines and imposes the idea of Spain? The central region of Spain has found it necessary throughout its history to forcibly insert the peripheral regions into definitions of the nation, even though those in the periphery may have been ambivalent or even opposed to becoming part of the Spanish nation. Both Santiago’s and Teresa’s lasting importance in narratives of Spanish nationhood also illustrate the centrality of these early seventeenth-century debates in contemporary society. 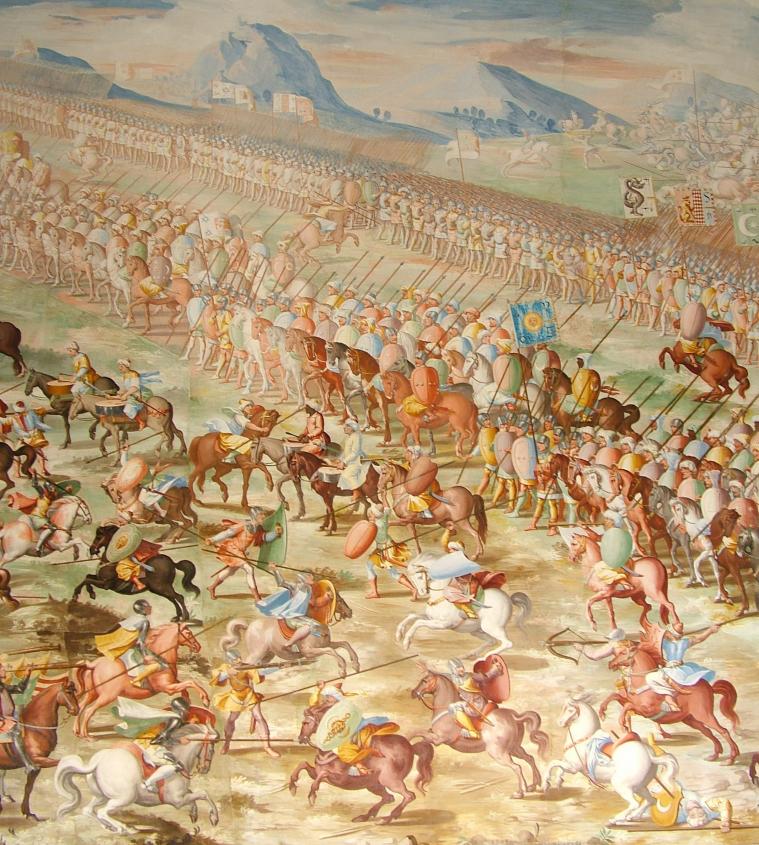 A frescoe depicting the 1431 Reconquista Battle of Higueruela

Rowe’s study of the origins of Spanish national discourse in sacred debate is beautifully written, well crafted, and coherently organized. It is intriguing, highly informative, and original. Not all scholars will welcome Rowe’s argument that the earliest definitions and debates about the nation rested on discussions of scared and spiritual matters, but it is a courageous and highly important study.

All images  courtesy of Wikimedia Commons

Chloe Ireton’s review of Boundaries: The Making of France and Spain in the Pyrenees and Zachary Carmichael’s review of Bárbaros: Spaniards and Their Savages in the Age of Enlightenment