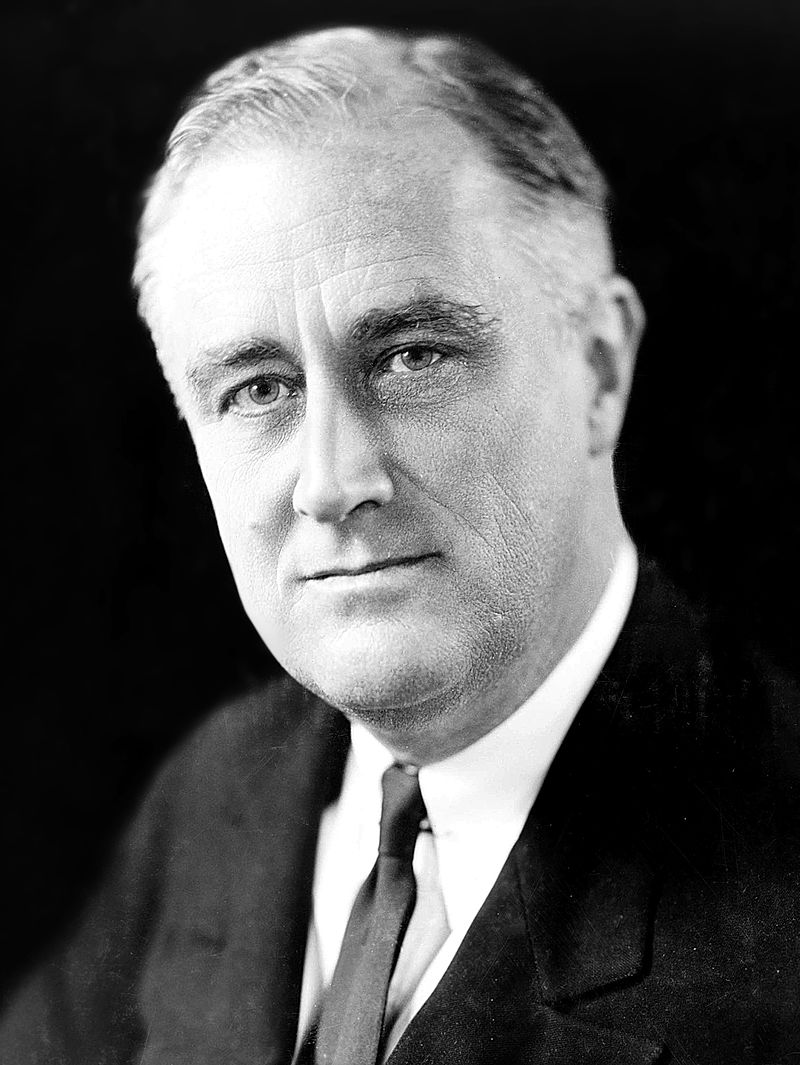 The 1936 National Democratic Convention in Philadelphia was a coronation of sorts for President Franklin D. Roosevelt, who faced little serious opposition in his pursuit of a second nomination. The convention program was full of articles and photographs that talked up the president’s programs and achievements during his first term. However a closer look at the working drafts found in the program printer’s archive, stored on campus at UT Austin’s Briscoe Center, shows that the administration grappled with presenting the political issues of the day to the public. Of particular note are essay drafts related to America’s role in the world, and specifically how Roosevelt sought to justify military investment to a skeptical public.

The printer’s archive includes original artwork, photographs, advertisements and party leader biographies from the 1936 convention program. In addition, it boasts a set of fully annotated typed essays written by Roosevelt’s Cabinet members and other officials. Those essays—including entries for the State and Treasury departments, the National Park Service, and the Works Progress Administration—comprise the bulk of the program’s content.

The program represented a chance for the Roosevelt administration to project its philosophy, policies, and achievements upon both the convention and the upcoming general election. The essays’ many edits point to the ways that Roosevelt’s ideas and activities were deeply contested at the time within the Roosevelt administration, the Democratic Party, and the wider American public during the 1930s. 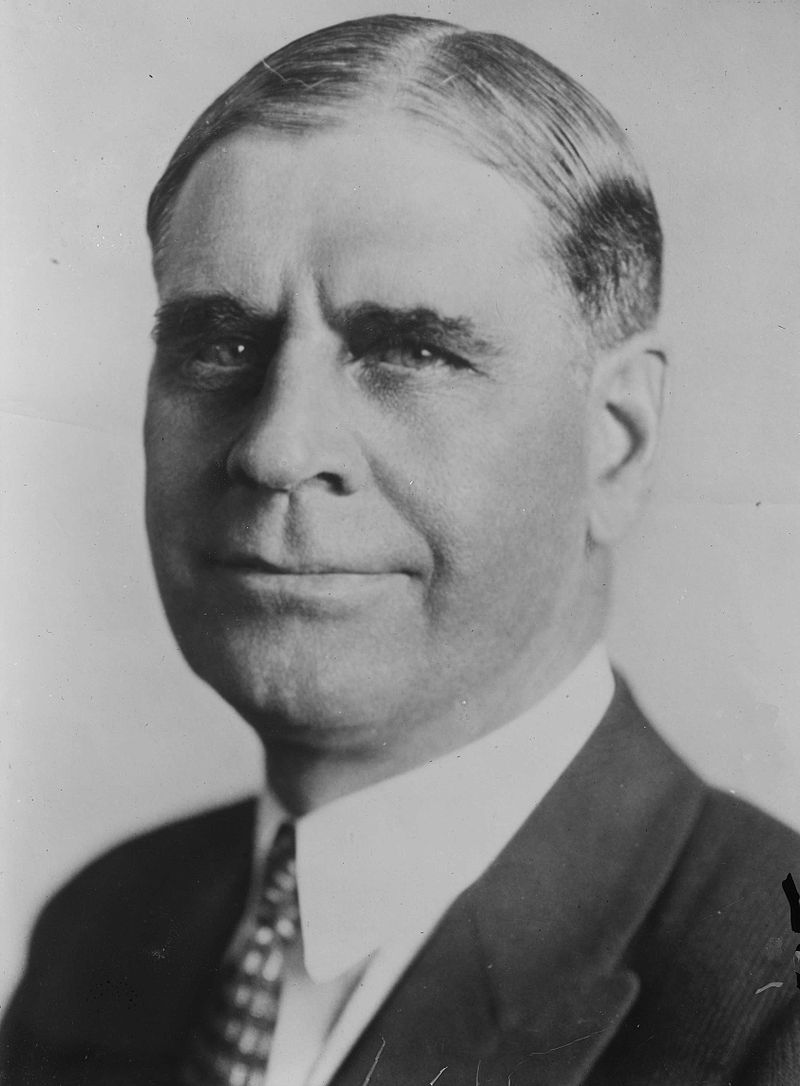 George Dern’s essay is more annotated than most. The former governor of Utah was Roosevelt’s secretary of war from 1933 until his death shortly after the convention. Like the staunch anti-war campaigner, U.S. Senator Gerald Nye, Dern was a western progressive. His essay reflects this, emphasizing that American foreign policy “contemplates no aggressive action: it is entirely defensive. We are a peace-loving people.” And yet, unlike Nye, Dern advocated for upgrading the military’s capabilities to create a force ­– neither “dangerously small” nor “menacingly large” — that could respond rapidly in a crisis. Treading lightly, Dern remains pointed in his criticism of the Republican controlled Congresses of the 1920s, accusing them of underfunding the Army, which left it lacking in both equipment and personnel: “The President and the [now Democratic] Congress have taken steps to remedy at least in part this serious defect.” However, he is quick to add that America remains “considerably behind the armies of other countries.”

It’s a point that Dern reiterates again and again, but, intriguingly, Roosevelt’s communication strategists omitted many of these assessments. Whole paragraphs alluding to America’s unpreparedness for war are crossed out, including references to needing more soldiers and rifles and the Army being “very much smaller than that of any of the nations of comparable importance.” Roosevelt operatives—aware that the president’s internationalist leanings were stronger than those of the American public as a whole—were as keen as Dern to stress the practical rather than idealistic reasons for military investment. However, they appear to have thought Dern went too far and risked making America appear weak. In a world stalked by Hitler and Stalin, during a decade that had witnessed Japanese aggression in Manchuria and the Italian invasion of Abyssinia, that would be an understandable concern. In any case, Dern’s essay employs another motif to broker consensus for military investment: the Army as an agent of social and economic progress. 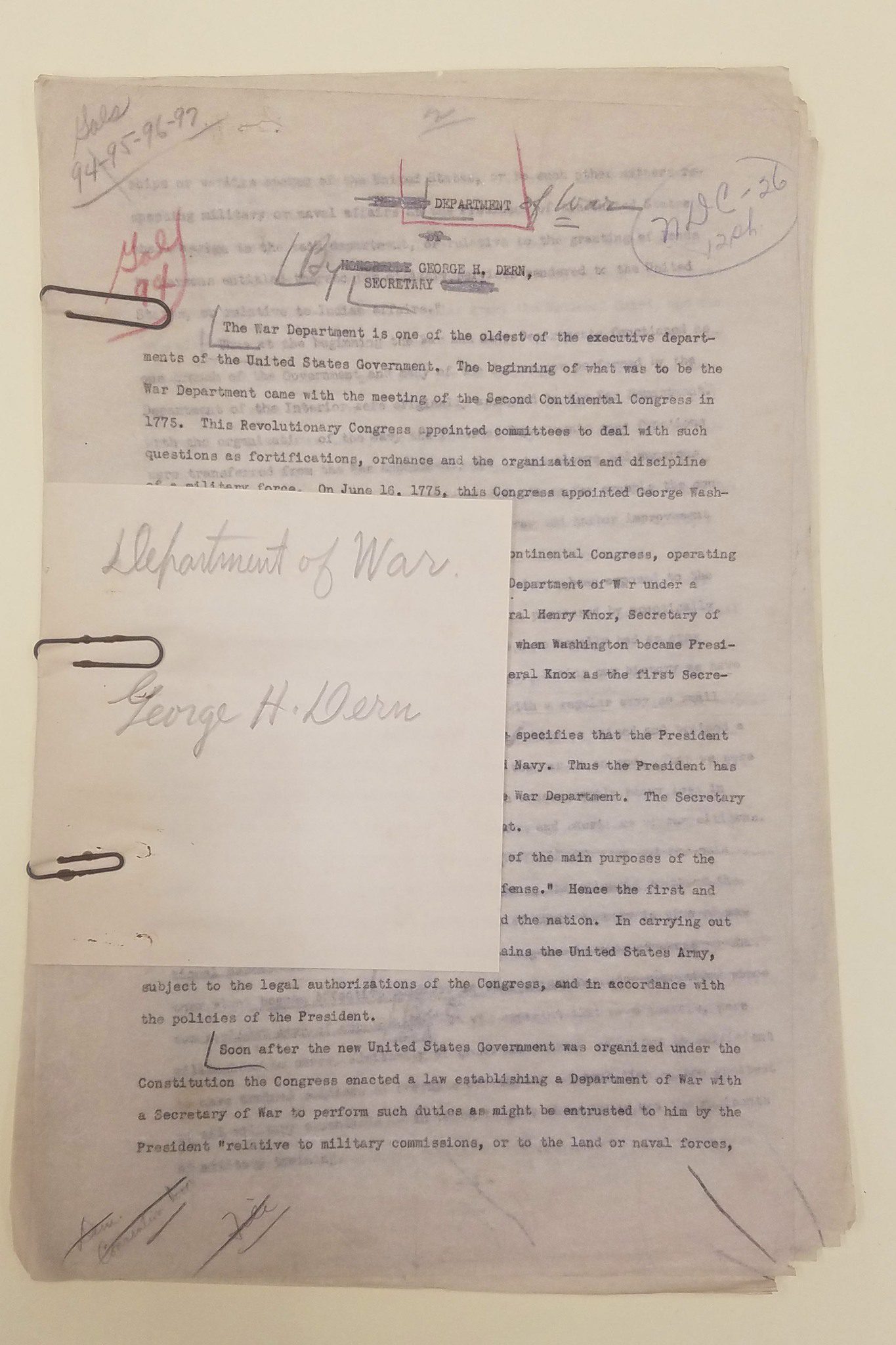 Essay by Dern with edits (via the Dolph Briscoe Center)

Dern states that the Army had been a “vital creative force that is closely identified with the growth and progress of our country.” Not only was it instrumental in pioneering preventative medicine and radio transmission, it was Army engineers who had “surveyed the routes of the early canals and the first railroads.” In addition to placing the Army within America’s glorious, trailblazing past, Dern emphasizes its nonmilitary achievements in the present. He highlights the Army’s work in disaster response and flood mitigation, as well as in training, equipping, and feeding members of the Civilian Conservation Corps. which employed nearly 3 million unemployed American youths in a variety of conservation programs such as trail maintenance and tree planting during its nine-year existence.  Dern’s point was to show that the Army could “serve the people as well in the exigencies of peace as in the travails of war.” This was aimed at cultivating consent for an enhanced and enlarged military during a period when the public remained on the fence about internationalism and the prospect of upgrading America’s role in world affairs.

Dern was succeeded as secretary of war by Harry Hines Wooding, who continued his predecessor’s cautious modernization. Likewise, Roosevelt’s internationalism remained tempered, and domestic issues still dominated. However, events were to evolve rapidly. America’s perceived lack of response to Nazi aggression from 1938 on drew national and international criticism. After Paris fell to Hitler in 1940, the United States quietly pivoted toward Britain, as it had in World War I, supplying materials and later armaments in the war against Germany. Wooding was forced to resign and was replaced with Henry Stimson, who echoed Roosevelt’s now-increasingly hawkish tone and practice. Congress, however, remained divided even as late as the fall of 1941. Efforts to dilute the neutrality acts of the previous decade were successful, but the legislative opposition, led by Nye and others, was vociferous. Indeed, an extension to the military draft in August 1941 (from one to two and a half years) passed in the House by only one vote — that of Speaker Sam Rayburn from Texas. (Rayburn is pictured behind Roosevelt, right). But the bombing of Pearl Harbor by Japan in December proved to be the tipping point, outraging American public opinion and leading to a swift congressional declaration of war. Even Nye voted aye. Germany, Japan’s ally, declared war on America in the days following. The United States was now at war both in the Pacific and the Atlantic. As in 1917, policy had edged forward but then seemed to turn on a dime. More than 16 million Americans went on to serve in World War II. Partially, gradually, emphatically, intervention had prevailed over isolation.