In the 1970s the United Nations complex and the public housing projects of East Harlem projected two disparate images of New York City. 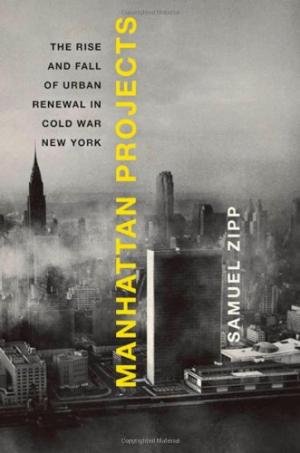 If the UN displayed the city’s position as a global capital of culture, politics, and economics, the deteriorating housing projects showed the city’s struggles with overcrowding, high crime rates, and poverty. According to historian Samuel Zipp, the roots of this contradictory double-identity reach back to the rise and fall of the city’s post-World War II urban renewal efforts.

The usual story of urban renewal in America is one of powerful officials, such as New York’s Robert Moses, wielding great power to remake entire cities as they saw fit. Zipp’s Manhattan Projects departs from this narrative by arguing that urban renewal represented a more complicated, contentious process carried out by New Yorkers from all races, classes, and city neighborhoods. For Zipp, renewal politics highlighted questions about what the city should look like, whose interests it should serve, and who would control its remaking. Starting with the celebrated construction of the United Nations complex in 1948 and moving up through the battles over public housing projects in East Harlem in the late 1960s, Manhattan Projects shows how competing visions of renewal and the contests that revolved around its implementation could create symbols of both cultural significance and urban decline.

In the early years of the Cold War, many New Yorkers viewed urban renewal as a “benevolent intervention” that would turn run-down and crowded streets into modern showcases for American democracy and strength. Early renewal efforts stemmed from an “ethic of city rebuilding” that focused on creating an ordered and open city. Zipp argues that the United Nations represented America’s attempts to help remake the world through internationalism and remake the city through modern architecture and superblock construction. In both cases, the goal was to order chaos, whether it was caused by war or overcrowding. Few complained about the UN’s destruction of an old meatpacking district. Instead, the city celebrated renewal’s ability to bring a site of international significance to life from a collection of abandoned abattoirs.

Celebration of redevelopment ebbed, however, when renewal officials sited several projects in the heart of old residential neighborhoods. Rather than accepting the destruction of their homes and communities, many New Yorkers pushed back against renewal. Zipp argues that the rise of resident activism had a contradictory impact on the shape of the city. On the one hand, activism helped preserve historic neighborhoods and prevented displacement of many New Yorkers. On the other, these protests led to the decline of urban renewal as a viable public project. That decline led to the deterioration of public housing and, when combined with segregation that limited the occupational and residential opportunities of many people of color, helped precipitate the urban crises of 1960s and 1970s. Using the building of Lincoln Center and the development of public housing projects throughout the city as examples, Zipp demonstrates the irony of this anti-renewal activism. It protected the close-knit, older neighborhoods of the activists, even as it pushed officials to abandon the residents of public housing projects to a fate of faltering services and non-existent civic support.

By delving deeply into the local politics surrounding the construction of several of New York City’s most iconic landmarks, Manhattan Projects demonstrates that urban renewal’s legacy stretched well beyond the concrete foundations of its projects and the large personalities of its leaders. Renewal fostered competing imaginings of the city’s future, jumpstarted important debates over the meanings and pursuit of progress, and resulted in the formation social issues that continue to shape the city—and its growth—to this day.