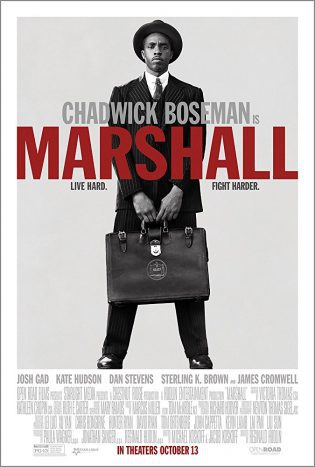 When Hollywood media websites announced Chadwick Boseman would portray Thurgood Marshall in December 2015, people immediately slammed director Reginald Hudlin’s choice to select an actor who did not share Marshall’s phenotype. Boseman is brown skinned with 4b hair, while Thurgood Marshall was light skinned and had a 3b curl pattern. Those vast differences, the critics held, rendered the movie inauthentic because Thurgood Marshall benefited from light skinned privilege his entire life. Some even thought Boseman’s slender physique made him the wrong choice. I chuckled at that observation knowing that a glance at the movie’s synopsis and a Google image search would have easily cleared up their confusion. All jokes aside, I initially reacted to the news with curiosity and not disdain. I wanted to know whether a filmmaker could truthfully tell Marshall’s story without focusing on how colorism worked in his favor. In order to give a fair response to this question, I examined a variety of materials: a summary of the film; Chadwick Boseman’s interview on Jimmy Kimmel Live! (air date June 21, 2017), biographies Devil in the Grove by Gilbert King and Thurgood Marshall: American Revolutionary by Juan Williams; and the movie Marshall. I decided the scope of the film made such an undertaking possible.

The debate over light skin privilege stems from a practice common in the United States known as colorism, a form of discrimination in which people are treated differently based on the social meanings attached to skin color. This type of behavior is manifested in the preferential treatment given to African Americans who physically approximate whiteness. For example, in the early 20th century, brown paper bag and blue vein tests constituted an integral part of the application process for some Black institutions and organizations (i.e., universities, sororities, and fraternities) that afforded members opportunities to improve their social-economic situation. The ideal candidate had the following physical features: lighter than or the same color as a brown paper bag and visible veins because of light skin. People censuring Boseman’s casting most harshly argue that the color caste in America enabled Thurgood Marshall to accomplish important milestones like earning a law degree from Howard University, being a successful NAACP litigator (Marshall won 29 out of the 32 cases he tried before the Supreme Court), and becoming the first African American Supreme Court Justice.

While the complexion critique is valid, one cannot reduce Thurgood Marshall’s life to benefiting from light skin privilege. Devil in the Grove and Thurgood Marshall: American Revolutionary show there were limitations to his color entitlements, the most striking example being Marshall’s attempted lynching in Columbia, Tennessee. In 1946, the NAACP sent Marshall to Columbia to defend  two African American men accused of rioting and attempting to murder white law enforcement officers (Zephaniah Alexander Looby and Maurice Weaver served as co-counselors). Following their acquittal, an angry group of local whites, including some police officers, apprehended Marshall and his colleagues, but chose to lynch Marshall instead of the dark skinned Looby and Weaver, who was white. Fortunately for the Civil Rights icon, Looby’s protestations and the sound reasoning of a local magistrate stopped Marshall’s execution. This incident was one of many where Marshall’s French Vanilla hue could not protect him from experiencing the racial violence (real and threatened) and discrimination that come with being Black in America. 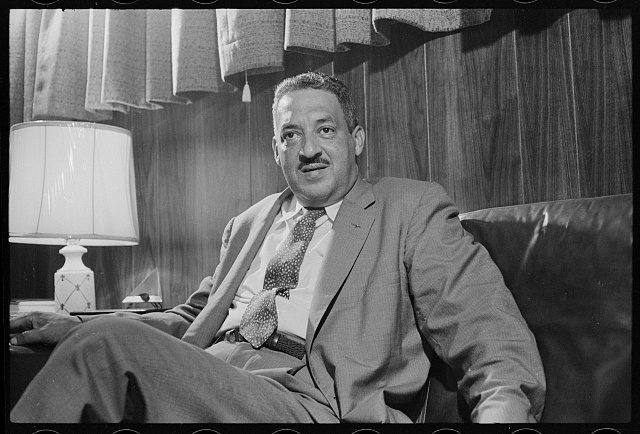 Thurgood Marshall in 1957 (via Library of Congress)

Since Marshall focuses on the areas in Thurgood Marshall’s life where colorism played an insignificant role, casting a dark-skinned actor does not dilute the story. The movie introduces us to Marshall’s personality, provides a glimpse into how he executed his legal genius, and sheds light on the challenges he faced as a Black lawyer. In exploring those aspects of Marshall’s life, the movie’s objective is not to deify him, but to bring him down to earth and capture his essence when he was a young lawyer for the NAACP.  The viewer sees this in a story centered on one criminal case he and Connecticut based attorney Samuel Friedman tried in 1941. The previous year, white Greenwich socialite Eleanor Strubing accused her Black American chauffeur and butler, Joseph Spell, of rape. She also claimed he attempted to kill her by throwing her into the Kensico Reservoir.  The NAACP took on the case not only to ensure an innocent man received a fair trial, but also to protect other African American domestic workers in Connecticut.  After Strubing’s allegations, the NAACP heard rumors of Northern white families firing their servants because they feared the presence of a sexual predator in their home. Given that domestic labor was the main source of income for African Americans in Connecticut, the NAACP felt compelled to prove Spell’s innocence. Lastly, high profile criminal cases expanded the organization’s membership and increased funding, which the NAACP needed in the early 1940s.

Although Marshall, like all Hollywood films based on historical events, took a few liberties, the Associated Press noted that the movie was, for the most part, faithful to the facts. This is especially true when it comes to the film’s depiction of Thurgood Marshall’s character, his skills as a litigator, and the hardships he endured. Gilbert King and Juan Williams describe him as folksy, charming, and always laughing. Looking at Marshall’s fondness for joking, King recounts a time when, after a legal victory, he opened a bottle of whiskey in the NAACP’s headquarters and amused his co-workers with impersonations of judges, opposing counsel, and dimwitted “uncle Tom” witnesses. In the movie, he is unpretentious and alluring in his interactions with everyone from the Connecticut Black family who hosted him to a woman he met in a local bar. Screenwriters Michael Koskoff and Jacob Koskoff (father and son) and director Reginald Hudlin also showcase Marshall’s comical side in the scenes where Sam Friedman picks him up from the Bridgeport train station and when both approached an angry group of whites in front of the courthouse. At the train station, Marshall asked Friedman to carry his luggage. Upon picking them up, the latter inquired if the suitcases contained cement because of their weight. Marshall, whose back is facing Friedman, answers “guns” with a devilish smile. He quickly ended the prank and assured his co-counselor that the luggage only had law books. Once the trial started, a mob who supported Mrs. Strubing greeted Marshall and Friedman, who was Jewish, with posters that had racist caricatures of them. Marshall walks up to a person holding a sign, turns to Friedman with a smirk and replies, “that doesn’t look anything like me, does it?” 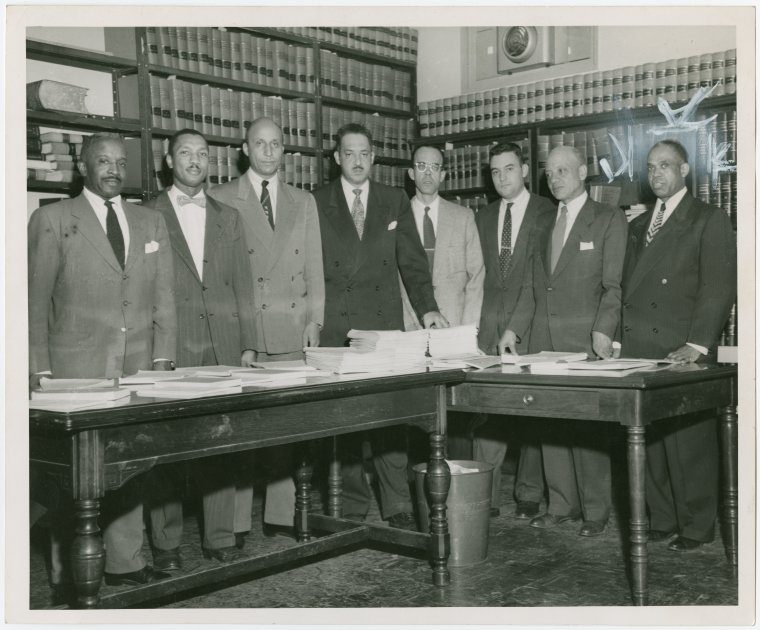 Thurgood Marshall and other members of the N.A.A.C.P. legal defense team who worked on the Brown v. Board of Education case (via The New York Public Library)

Even though Marshall has light hearted moments, Hudlin and the Koskoffs balance the comedy with serious events. As a result, Marshall does not come across as a jester, but a layered man who could simultaneously joke about racism and use his legal expertise to diligently seek justice for wrongly accused Black Americans. The jury selection scene stands out in illuminating this quality about him. Friedman wanted to dismiss a woman because he felt the juror’s southern roots and gender made her biased towards Mrs. Strubing. Marshall, however, viewed those characteristics as unimportant. Instead he carefully examined the juror’s body language during her interview and noticed she reacted unpleasantly to Lorin Willis, the head prosecutor, but gave non-verbal signals that showed she valued Friedman’s opinions. Eventually, Marshall convinced his co-counselor to keep her and the decision boded well for them. Overall, the movie shows that it was Marshall’s keen observations of the evidence (depositions and the physical landscape where Spell allegedly tried to kill Strubing) that planted seeds of doubt in the minds of the all-white jury. You not only see the future Supreme Court Justice’s talents at work, but also an incredible amount of charisma.

Lastly, the film portrays the violence Marshall endured as a Black man on a Civil Rights crusade. In one of the opening scenes, a gang of white men fired gunshots to intimidate him as he left Hugo, Oklahoma after trying a sensational case. Later on during the Spell trial, two white men who sympathized with Eleanor Strubing assaulted him at a bar he visited to relax following a taxing day. 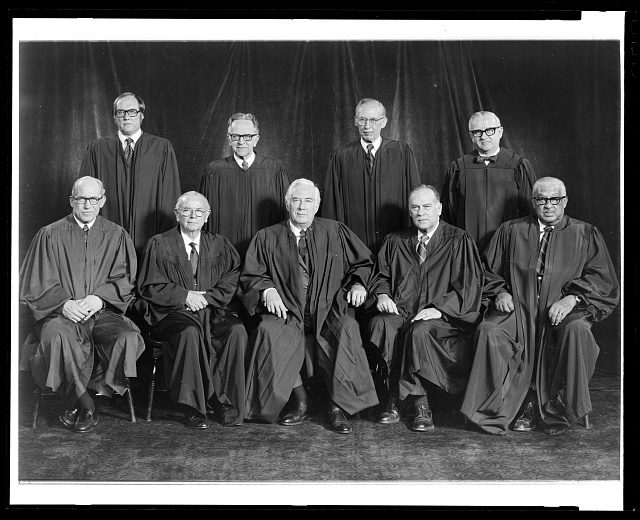 Despite the effort that went into attending to the facts, Marshall is less than perfect. The main weaknesses are the underdevelopment of Marshall’s relationship with his first wife Vivian “Buster” Burey (Marshall became a widower in 1955 when she died from cancer) and the cursory glance given to Marshall’s performance in the courtroom. The viewer learns Buster had multiple miscarriages and Thurgood’s legal work kept him away from her for long periods. Since the movie aims to humanize Marshall, it could have benefited from more attention to how he and Buster coped with their fertility problems. Moreover, an in-depth depiction of Marshall’s struggle to reconcile his demanding job with his responsibilities as a husband would have given the audience a better understanding of the man behind the myth. Hudlin and the Koskoffs could have resolved the film’s second shortcoming by extending the scene where he represents W.D. Lyons, a black man coerced, through torture, into confessing he murdered a white family in Hugo, Oklahoma. In the movie, Sam Friedman talks during the Spell trial because the judge gagged Marshall. Although we see Marshall masterfully coordinate the defense’s strategy, the movie does not thoroughly show how he excelled at cross examining witnesses and presenting evidence to the jury. This was a missed opportunity: during Lyons’ case, Marshall’s skills as a trial lawyer were so great that local whites developed sympathy for the defendant and found exculpatory information for the NAACP’s lead attorney.

With all its flaws, Marshall is worth seeing. Chadwick Boseman deftly captures the spirit of Thurgood Marshall described in Gilbert King and Juan William’s biographies. Furthermore, actors Josh Gad and Sterling K. Brown give strong performances as Sam Friedman and Joseph Spell. In addition to being an enjoyable, well-acted legal drama, Marshall has value because it peels back the mythic veil surrounding Thurgood Marshall and gives viewers an introduction to the man. For those interested in Marshall’s life beyond his most noteworthy achievements, Brown v. Board of Education and becoming the first African American Supreme Court Justice, I recommend Marshall, Devil in the Grove, and Thurgood Marshall: American Revolutionary.

History Calling: LBJ and Thurgood Marshall on the Telephone
Jennifer Eckel reviews the HBO film Thurgood (2011)
12 Years a Slave and the Difficulty of Dramatizing the “Peculiar Institution”