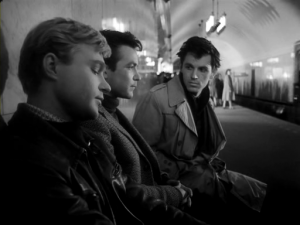 It is Moscow in the early 1960s. In this transitional period, when Stalin’s death opened up new possibilities for private life in Soviet society, we meet three young men and a young woman who can almost bring themselves to believe that they are entitled to a life that will be individually meaningful. They search for authenticity in a city that seems both ordinary and extraordinarily vivid. We don’t just watch Sergei, Slava, Kolya, and Anya; we follow them to school and work, to a spontaneous evening of dancing and music in the courtyard of their apartment building, we are plunged into the crowd at a surprisingly joyful May Day parade and into the audience at a public poetry spectacle that feels more like a rock concert.  The director, Marlen Khutsiev, gives us intimacy amid public spectacle, so we feel the characters’ self-confidence in looking forward and their increasing frustration at the limitations set before them. 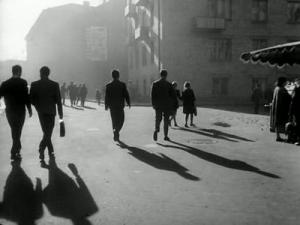 The close personal point-of-view and the almost tactile realism of the individual episodes keep all this from becoming a trite coming-of-age narrative, even as the film explores what was emerging as one of the central late-soviet social issues: finding a balance between private fulfillment and public responsibility in a society where surveillance had been taken for granted.

These engaging stories of cautious, youthful self-discovery are unexpectedly interrupted about half-way through the film, when the camera zeros in on a tear-away calendar marked June 22, the date in 1941 when the Nazis invaded the Soviet Union. I don’t know how contemporary Soviet viewers perceived the film up until this point, but for me, its resolutely present and future orientation had obscured what now becomes obvious: that the twenty-somethings we’ve been hanging out with were members of the first generation to come of age after the war.  Their search for purpose suddenly no longer seems purely ideological, materialistic, or individual. They are, in fact, each shadowed by the devastation of war-time loss even as the richness of their everyday experiences seems to have put the war behind them. 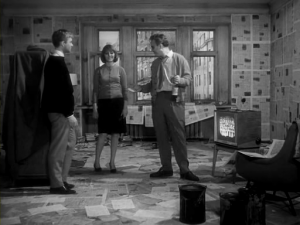 As in so many other Soviet films of this period, the older, war-scarred generation has no useful guidance for them in the new, freer, comparatively luxurious post-war world. The young adults are suspended between past and future, but in this brave new world, they are on their own. (The absence of a wise advisor, a stand-in for the Communist Party and a staple of Stalinist films and novels, infuriated censors and caused the film to be shelved for four years).

Margarita Pilikhina’s stunning cinematography brings us close to these characters and their world of youthful pleasure, anxiety, and growing disillusionment.  Her camerawork is primarily responsible for the intimacy we feel and the empathy we develop. I am Twenty is a beautifully lighted film. Indoors and out, in the glare of sunlit streets and the shadows of workplaces and apartments, the black-and-white photography is a palette of luminous shades of gray.  The soft lighting, however, is neither sentimental nor nostalgic; it conveys the characters’ sense of being suspended in time, between an unthinkable past and not quite imaginable future. 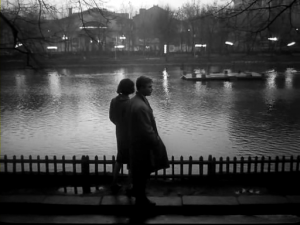 At the same time, the camera is exceptionally mobile: moving constantly, careening through streets and circling around, soaring above, and zooming in on people. The tension between suspension and motion embodies the young people’s inner conflicts and perfectly captures the hope and disbelief –and growing cynicism–that characterized this period in Russian history.

In my view, I am Twenty is the best Russian film of the period. Admirers of more well known directors like Andrei Tarkovsky will undoubtedly disagree, but in I am Twenty, Khutsiev succeeds in creating a fully realized world and plumbing the depths of human experience, not in some fantastical, imagined situation, but in the most ordinary everyday. 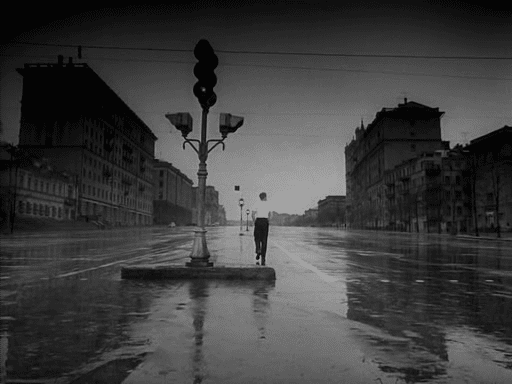