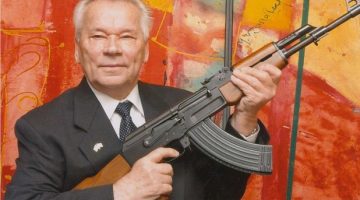 In his latter years Kalashnikov still very much liked to tinker, and to reflect on his most popular invention. Though he denied any responsibility for what he described as the misuse of his weapon, he did come to express some regret for what it had become: a symbol and weapon of choice for terrorists and revolutionary groups the world over. “I would prefer to have invented a machine that people could use and that would help farmers with their work – for example a lawnmower.”