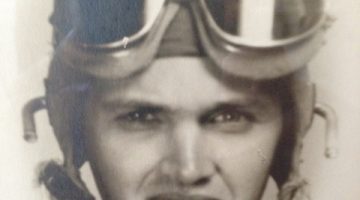 They met on the boardwalk of Rehoboth Beach, Delaware, on Labor Day of 1941, introduced by mutual friends.  She was a self-described ambitious career girl; an English-major graduate of the University of Delaware, she would spend the war years working first in the advertising department of the DuPont Company, and then as the editor of RCA Victor’s company newsletter. He was a mail clerk for DuPont when he enlisted in the Army Air Forces in December of 1941 and began a three-month stint of basic training.