By Alberto A. Martinez

Before Galileo did anything in astronomy, the Italian philosopher Giordano Bruno argued that the Earth moves around the Sun. Bruno believed that the Earth is a living being, with a soul. These were unusual beliefs for a Christian.

In 1592, Bruno was captured by the Inquisition in Venice and imprisoned. The next year he was transferred to the Inquisition’s prison in Rome. After seven and a half years of interrogations, he was finally condemned to what was widely feared as the worst kind of punishment: he was gagged, taken to a public place, tied to a post, and burned alive. Historians are quick to point out that Bruno was not killed for his belief in the Earth’s motion, but for heretical religious beliefs. 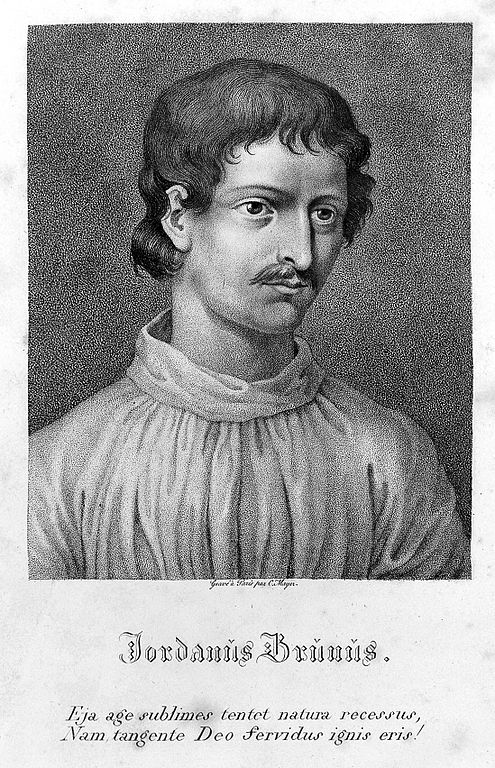 Engraving of Giordano Bruno from ca. 1830 (via Wikimedia Commons)

For years I investigated this story and what I found really surprised me. It turns out that Giordano Bruno’s belief in the moving Earth was directly connected to some of his beliefs that were heretical. To Catholics, heresies were willful departures from Catholic dogma. Heresies were the worst kinds of crimes, even worse than murder. Heresies were crimes against God.

Bruno’s final condemnation by the Inquisition exists only in a partial copy, prepared for the Governor of Rome. Unfortunately, it omits the list of accusations against Bruno, that is, his alleged heresies. But there is some good evidence of what they were.

On February 8, 1600, the Roman Inquisition condemned Bruno at the palace of the supreme Inquisitor, Cardinal Ludovico Madruzzi. On that day, one of the witnesses present was a young German humanist, Gaspar Schoppe, a guest living at Cardinal Madruzzi’s palace. Days later, Schoppe also witnessed Bruno’s execution at a public marketplace, an open intersection of city streets in Rome known as the Campo de’ Fiori: the “Field of Flowers.” 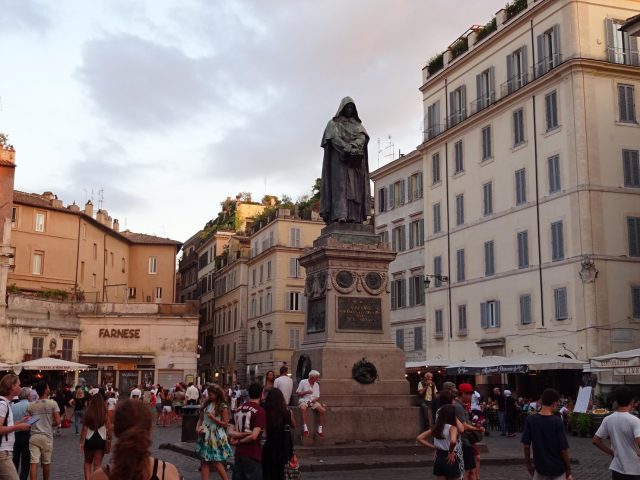 The statue of Giordano Bruno at the Campo de’ Fiori, in Rome. The plaque reads: “9 JUNE 1889. TO BRUNO. THE CENTURY PREDICTED BY HIM. HERE WHERE THE FIRE BURNED” (via author).

The day Bruno was burned, Schoppe wrote a detailed letter to a friend explaining what had just happened. Schoppe complained that ordinary people in Rome were saying that a Lutheran was burned. But Schoppe explained that that was not true at all. Bruno wasn’t a Lutheran, but something far worse—a “monster.”

Schoppe wrote:  “Perhaps I too would believe the vulgar rumors that Bruno was burned for Lutheranism, but I was present at the Holy Office of the Inquisition when the sentence against him was pronounced, & so I know what heresy he professed.” 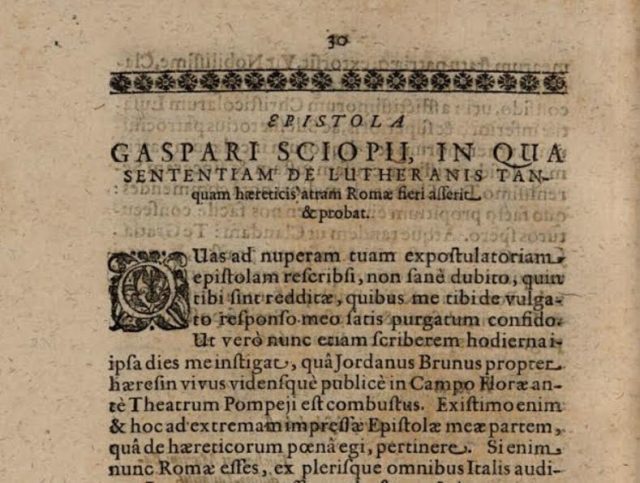 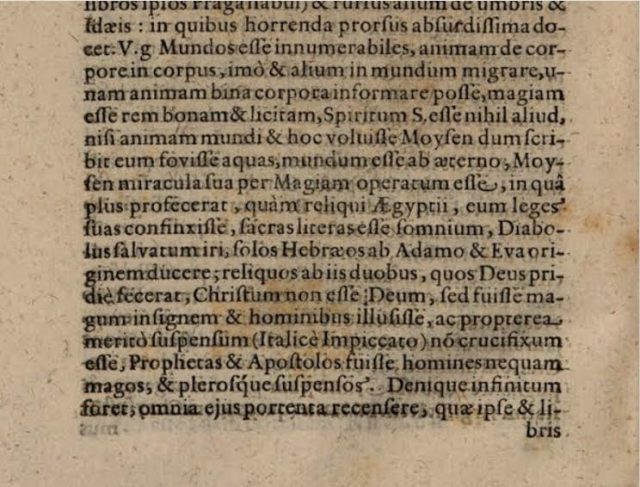 Excerpt of Gaspar Schoppe’s letter from February 1600, published in 1621, stating Bruno’s “horrendous” beliefs and teachings (see below for source).

Schoppe listed twelve of Bruno’s absurdly horrible claims, his “teachings” (quibus horrenda prorsus absurdissima docet). I’ll quote just two of them, the first and fifth:
(1) “Worlds are innumerable,”…
(5) “the Holy Spirit is nothing other than the soul of the world,”…

Schoppe commented: “perhaps you might add: the Lutherans neither teach nor believe such things, and therefore should be treated otherwise. I agree with you, & therefore, precisely no Lutherans do we [Catholics] burn.” 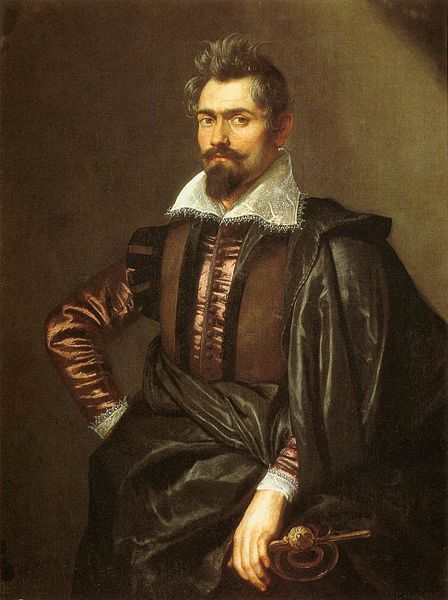 A portrait of Gaspar Schoppe by Peter Paul Rubens, 1606 (via Wikimedia Commons).

The two accusations above recur throughout Bruno’s trial, from its beginning to the end. It turns out that both were directly connected to Bruno’s conviction that the Earth moves. And most importantly, surprisingly, I found that these beliefs were heresies.

Catholics were horrified by this idea, because if many worlds exist then Jesus Christ would have to be born and crucified in each of those worlds to offer salvation to the beings in such worlds. 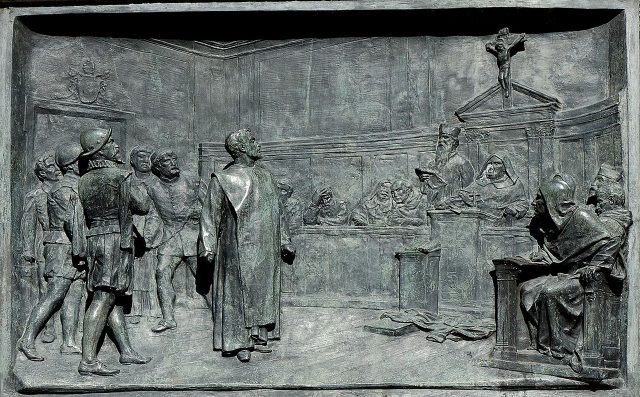 Relief depicting the trial of Giordano Bruno, from the base of the Ferrari statue in Campo de’ Fiori (via Wikimedia Commons).

Books on heresies echoed this statement. For example, in 1590, Tiberio Deciani published a Criminal Treatise on All Heresies, in Venice, including the heresy that the Holy Spirit is the soul of the world. Yet Bruno said that to the Inquisitors in Venice when he was interrogated in 1592. And Bruno repeated it to the Roman Inquisitors; he “relapsed” into this heresy. Anyone who relapsed into a heresy, after being instructed to abandon it, was a proven to be an obstinate heretic.

Still, is there any direct evidence that the Inquisitors were aware, concerned, or annoyed, specifically, by Bruno’s claim, in three books, that the Earth moves around the Sun?

Yes. By 1597, theologians working for the Roman Inquisition had extracted ten propositions from Bruno’s books. The propositions were censured and Bruno had to recant. Two were about the “world soul” or “universal spirit.” One was about the planets being animated. One was about the existence of many worlds. And yes—Bruno’s fifth censured proposition was: “About the Earth’s motion.” 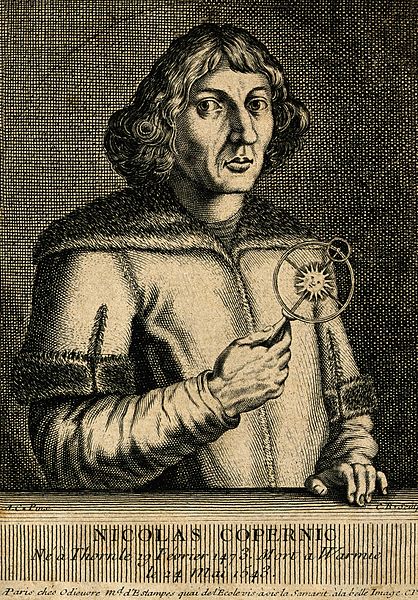 A line engraving of Nicolaus Copernicus (1473-1543) . Copernicus is holding a model of his heliocentric theory (via Wikimedia Commons).

This all means that Bruno’s belief in a moving Earth was part of the heretical worldview that he advocated both in his books and in his trial. His ideas about many worlds and about the soul of the world convinced him that Copernicus was right: the Earth moves. Those same ideas about worlds and souls led Bruno to his death.

But Galileo was more cautious than Bruno. 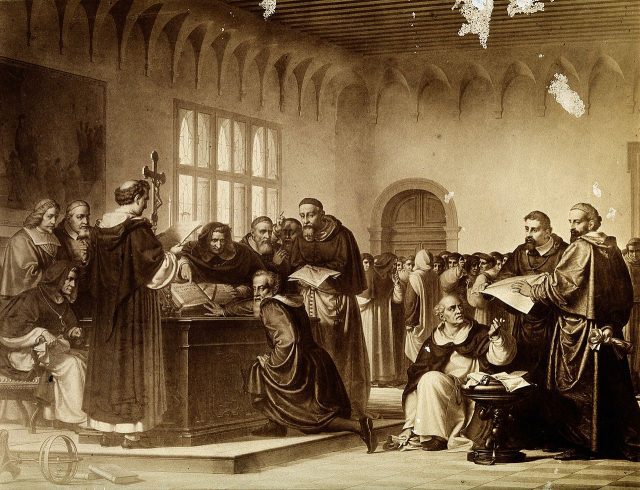 Illustration depicting Galileo Galilei at his trial by the Inquisition in Rome in 1633 (via Wikimedia Commons).

Galileo did not tell the Inquisitors about any soul or universal spirit that moves the Earth either. But in two private letters, in 1615, he guardedly admitted that he believed that the Sun can be described as the soul of the world and that it transmits a spirit throughout the universe, a spirit that gives life and movement to all things. Even the Earth?

After meeting with the Inquisitors in Rome, Galileo never again wrote about the universal spirit that vivifies and moves all things. We don’t even know if the Inquisitors knew that, in private, secretly, quietly, Galileo too entertained such ideas.

Bruno was not killed for his belief in the Earth’s motion. But this belief was directly linked to key heresies that led to his execution.

The trial of Bruno was in the background of Galileo’s troubles with the Inquisition. Galileo lived in the haunting shadow of the burning man.

Also by Alberto Martinez on Not Even Past:
Alberto Martínez on Darwin’s Finches & Other Science Myths.
Was Einstein Really Religious?
Dividing by Nothing.
More of Alberto Martinez’s works and writings can be found here.