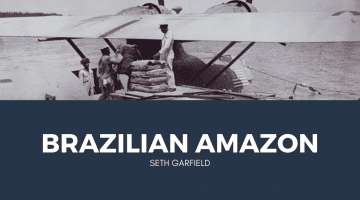 During World War II, the governments of Brazil and the United States made an unprecedented level of joint investment in the economy and infrastructure of the Amazon region. The dictatorship of Getúlio Vargas (1937-45) trumpeted the colonization and development of the Amazon (christened the “March to the West”) as a nationalist imperative to defend a sparsely settled frontier covering some sixty percent of Brazilian territory.