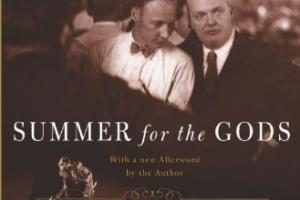 Like most teenagers growing up in Alabama during the late nineties, my first encounter with the 1925 John Scopes Trial came on the first day of my ninth grade biology class. Inside the front cover of the textbook a message from the Alabama State Board of Education stated: “This textbook discusses evolution, a controversial theory some scientists present as a scientific explanation for the origin of living things, such as plants, animals, and humans.”