In his response to the recent resignation of Hosni Mubarak of Egypt, President Barack Obama situated the event within a longer history of popular freedom struggles. 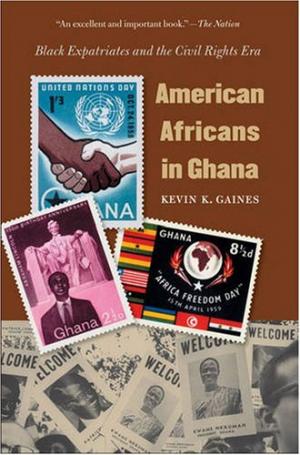 His references to Gandhi and the fall of the Berlin Wall evoked powerful images for most Americans, but Obama’s allusion to the small West African nation of Ghana may be less familiar. Yet in 1957, Ghana’s peaceful transition to independence heralded the end of European colonialism and served as an inspiration to oppressed peoples throughout the world.  Kevin Gaines’ American Africans in Ghana recovers the symbolic role that the young nation played in the African American freedom struggle, and the reasons why it stirred Martin Luther King to proclaim “There is something in the soul that cries out for freedom.”

Gaines (who taught in the History Department at UT Austin, 1997-99) argues that postcolonial Ghana under Kwame Nkrumah offered a unique instance in the history of black identity. The country acted as a symbol of pride and a haven for critics of Western racial hierarchies. The author follows the lives and writings of a number of black intellectuals who left the Americas to take up residence in or visit Ghana, including George Padmore, Julian Mayfield, and Malcolm X. The socialist, Pan-African thought advanced by Nkrumah helped mobilize global activists and inspire stringent social and economic critiques of segregated societies in the western hemisphere. In Ghana, the expatriates discovered a new sense of racial pride, which they applied to their own struggles for equality at home: “the legitimacy and salience of black and African heritage” became “the basis for their full participation in American life.” These men and women asserted their identity as citizens of a global society.

Yet Gaines also recognizes that the realities of postcolonial governing challenged this idealism, leading some black intellectuals to cling to their American associations. Author Richard Wright and civil rights campaigner Pauli Murray viewed Nkrumah’s traditionally influenced autocratic leadership with trepidation, advocating for modern secularism and an American-style system of jurisprudence, respectively. Both rejected a sense of “natural” racial solidarity with the people of Ghana, and Murray specifically adhered to an idealized vision of color-blind American liberalism. The tensions between Nkrumah’s autocratic socialism and opposing visions of the postcolonial state eventually led to his ouster, but Gaines believes that Ghana remained a symbol of hope for oppressed peoples. Nkrumah’s idealism lived on in sympathetic African Americans, who continued to articulate a “vision of an expansive, interconnected black world… and their conception of being in the world as peoples of African descent.”

Gaines offers a densely nuanced intellectual history that returns Ghana to its position as both innovator and inspiration within the larger discussion of transnational civil rights. Those willing to engage his ambitious argument will find a thought-provoking investigation of African American identity and the global ideals of equality and freedom that continue to shape contemporary events.