In February 1946, George F. Kennan, a senior U.S. diplomat based in Moscow, sent the State Department his famous “long telegram,” an attempt to explain Soviet behavior at a time of quickly worsening relations between the superpowers, as their wartime alliance unraveled. Among the first readers of Kennan’s missive were Soviet leaders, who obtained the top-secret document through intelligence channels. On orders from the Moscow, the Soviet ambassador in Washington, Nikolai Vasilovich Novikov, quickly set to work writing a comparable cable analyzing U.S. motives and behavior. It remains unclear whether the telegram, dispatched on September 27, 1946, reflects Novikov’s sense of what his superiors wished to read or his true understanding of U.S. policy. In any case, the document is a striking expression of mounting Soviet suspicions of Moscow’s erstwhile ally. Excerpts of Kennan’s statement were posted last week on NEP. Excerpt’s of Novikov’s message are posted below. Both come from our featured book this month, America in the World: A History in Documents from the War with Spain to the War on Terror. 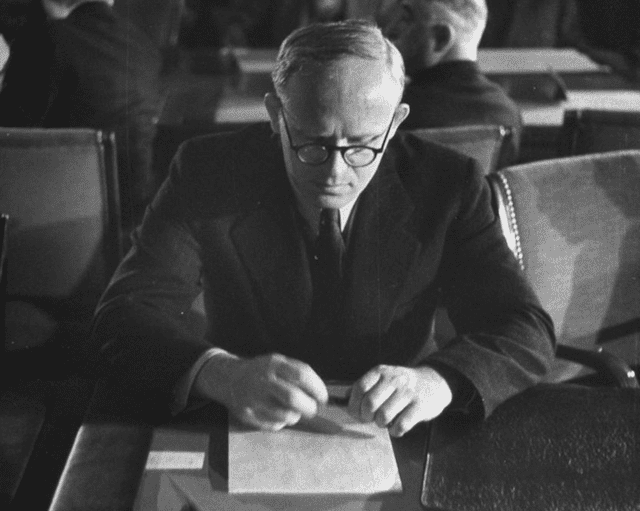 Reflecting the imperialistic tendency of American monopoly capital, U.S. foreign policy has been characterized in the postwar period by a desire for world domination. This is the real meaning of repeated statements by President Truman and other representatives of American ruling circles that the US has a right to world leadership. All the forces of American diplomacy, the Army, Navy, and Air Force, industry, and science have been placed at the service of this policy. With this objective in mind broad plans for expansion have been developed, to be realized both diplomatically and through the creation of a system of naval and air bases far from the US, an arms race, and the creation of newer and newer weapons….

This situation does not completely match the expectations of those reactionary circles who hoped during the Second World War that they would be able to remain apart from the main battles in Europe and Asia for a long time. Their expectation was that the United States of America, if it was not able to completely avoid participation in the war, would enter it only at the last moment when it might be able to influence its outcome without great effort, completely securing its own interests. It was intended thereby that the main rivals of the US would be crushed in this war or weakened to a great degree and that due to this circumstance the US would be the most powerful factor in deciding the main issues of the postwar world. These expectations also were based on the assumption quite widespread in the US during the first period of the war that the Soviet Union, which had been attacked by German fascism in June 1941, would be weakened as a result of the war or even completely destroyed. 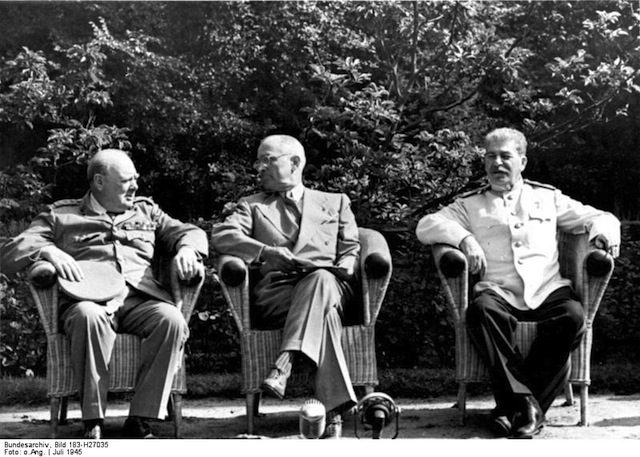 Churchill, Truman, and Stalin at the Potsdam Conference, 1945. Via Wikimedia Commons.

Reality has not borne out all the expectations of the American imperialists….

Europe came out of the war with a thoroughly shattered economy, and the economic devastation which resulted during the war cannot soon be repaired. All the countries of Europe and Asia are feeling an enormous need for consumer goods, industrial and transportation equipment, etc. Such a situation opens up a vista for American monopoly capital of enormous deliveries of goods and the importation of capital to these countries, which would allow it [American monopoly capital] to be introduced into their economies. 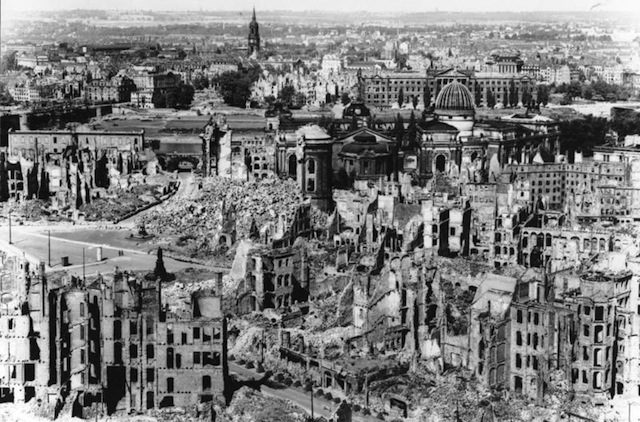 Destruction of Dresden, 1945. Via Wikimedia Commons

The realization of this opportunity would mean a serious strengthening of the economic position of the US throughout the entire world and would be one of the stages in the path toward establishing American world supremacy….

On the other hand, the expectations of those American circles have not been justified which were based on the Soviet Union being destroyed during the war or coming out of it so weakened that it was forced to bow to the US for economic aid. In this event it could have dictated such conditions which would provide the US with an opportunity to carry out its expansion in Europe and Asia without hindrance from the USSR.

In reality, in spite of all the economic difficulties of the postwar period associated with the enormous damage caused by the war and the German fascist occupation the Soviet Union continues to remain economically independent from the outside world and is restoring its economy by its own means….

The increase in peacetime military potential and the organization of a large number of naval and air bases both in the US and beyond its borders are clear indicators of the US desire to establish world domination.

For the first time in the country’s history in the summer of 1946 Congress adopted a law to form a peacetime army not of volunteers but on the basis of universal military conscription…. The colossal growth of expenditures for the Army and Navy, comprising $13 billion in the 1946-1947 budget (about 40% of the entire budget of $36 billion) and is more than 10 times the corresponding expenditures in the 1938 budget, when it did not even reach $1 billion. 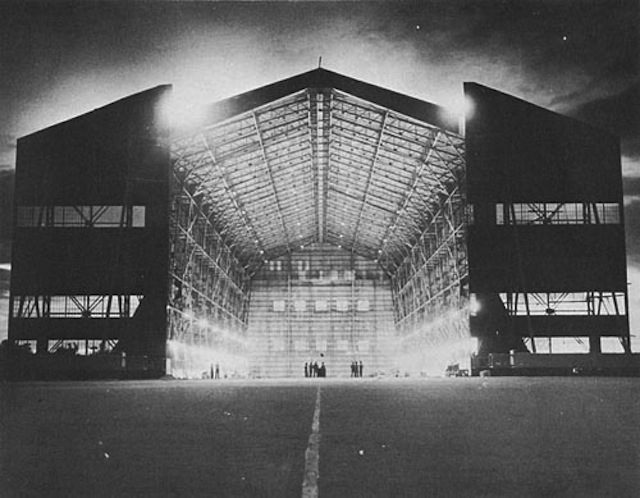 LTA Steel Hangar, Built by the 80th Seabees in 1914, at Carlson Field, Trinidad. Via WIkimedia Commons.

These enormous budget sums are being spent along with the maintenance of a large Army, Navy, and Air Force and also the creation of a vast system of naval and air bases in the Atlantic and Pacific Oceans. According to available official plans, in the coming years 228 bases, support bases, and radio stations are to be built in the Atlantic Ocean and 258 in the Pacific Ocean. The majority of these bases and support bases are located outside the United States….

The current policy of the American government with respect to the USSR is also directed at limiting or displacing Soviet influence from neighboring countries. While implementing it the US is trying to take steps at various international conferences or directly in these very same countries which, on the one hand, manifest themselves in the support of reactionary forces in former enemy or allied countries bordering the USSR with the object of creating obstacles to the processes of democratizing these countries but, on the other, in providing positions for the penetration of American capital into their economies…. 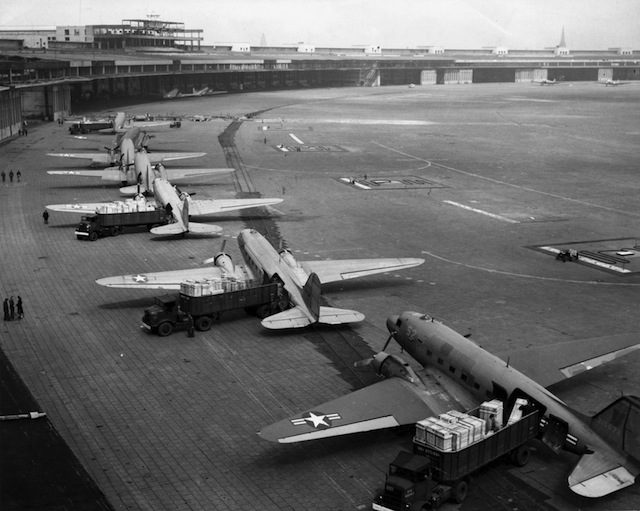 The numerous statements by American government, political, and military leaders about the Soviet Union and its foreign policy in an exceptionally hostile spirit are quite typical of the current attitude of American ruling circles toward the USSR…. The primary goal of this anti-Soviet campaign of American “public opinion” consists of exerting political pressure on the Soviet Union and forcing it to make concessions. Another, no less important goal of the campaign is a desire to create an atmosphere of a fear of war among the broad masses who are tired of war, which would make it easier for the government to take steps to maintain the great military potential in the US.