There are few characters more English than William Shakespeare’s Falstaff, yet there he is, alone onstage in part two of Henry IV, praising his favorite drink: Spanish wine, the “good sherris sack” that “ascends [him] into the brain” and gives him bibulous valor. It’s one of Falstaff’s funnier monologues, but still touching, infused with his realization that his young friend Prince Hal no longer seems to love him. If so, Falstaff muses, then at least their time drinking sherry from Jerez together was well spent.

Hereof comes it that Prince Harry is valiant; for

the cold blood he did naturally inherit of his

father, he hath, like lean, sterile and bare land,

manured, husbanded and tilled with excellent

endeavour of drinking good and good store of fertile

sherris, that he is become very hot and valiant. If

I had a thousand sons, the first humane principle I

would teach them should be, to forswear thin

potations and to addict themselves to sack. [Henry IV, Part Two, Act 4, Scene 3]

To addict one’s self to sack. An appropriate pun, perhaps intentional. “Sack” as both noun and verb: “sack,” another name for sherry, popular in Shakespeare’s England after the privateer Sir Francis Drake “sacked” 2,900 butts of the drink from the shipyards of Cádiz in 1587 (or so the story goes). Falstaff never labels the wine explicitly as from Spain, but it remains the “fertile” drink that redeemed the “cold blood” and “lean, sterile and bare” lands—England, perhaps—that Harry inherited from his father. Now “hot and valiant,” Harry is ready for Henry V. (“We few, we happy few, we band of brothers.”) Stolen, drunk, and stripped of its Spanish origins, wine from Jerez is sent back in time to become sherry, a medieval fount of Elizabethan identity and someday staple of English fruitcakes, funerals, and vicars’ sideboards. 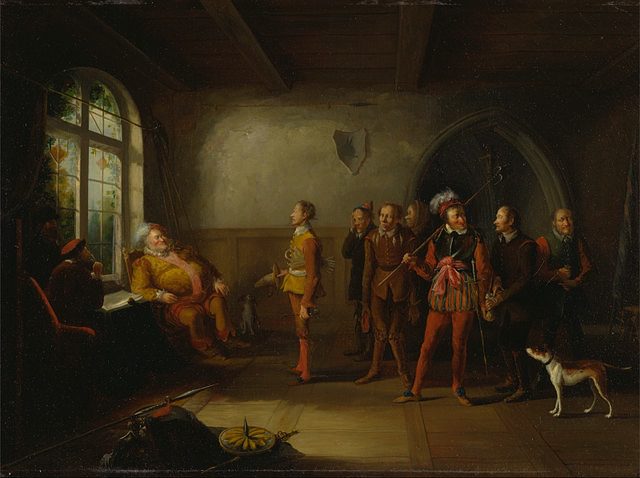 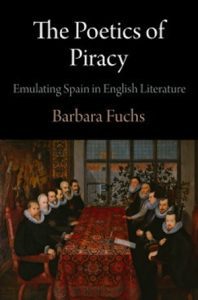 Barbara Fuchs doesn’t land on the Falstaff example in her excellent The Poetics of Piracy: Emulating Spain in English Literature, but it is part of the process she so attentively explores. During the English Renaissance, she argues, early modern Spain’s extraordinarily rich literary production—“chivalric, sentimental, and maurophile romance, as well as picaresque, pastoral and novella”—was appropriated, de-nationalized, and then hidden by England’s emerging national canon of literature. Coming off the world-changing century that began with the conquest of Granada and accelerated through Columbus’s exploration of the New World, imperial Spain remained the puissant—nay, poderoso—geo-political power to beat, which the English attempted through literary emulation, Fuchs argues. For Shakespeare and contemporaries on page and stage like Ben Jonson, Francis Beaumont, John Fletcher, and Thomas Middleton, “the Spanish vein” ran rich and deep, “even as the political situation between the two nations deteriorated in the wake of the Reformation and imperial rivalries.”

Fuchs makes her case by juxtaposing texts on Spain and translated Spanish sources to argue that in the period under study—from the late sixteenth century to the 1620s and beyond—English writers celebrated the act of piracy, literary and literal, as a means to steal from the Spanish Golden Age and transform it into something new. By looking at translators in the late sixteenth century, she suggests that England was self-conscious of its “relative poverty of English letters,” and sought to enrich its own imperial ambitions through the translation of Spanish geographies, manuals for navigation, military treatises, and, epics and romances. The Chilean epic La Araucana was translated as a “how-to” guide for conquering Indians and Irishman, but still more influential was Miguel de Cervantes’s Don Quijote, which Fuchs shows was freely available and popular in England from the year of its publication in 1605. She explores how Beaumont’s The Knight of the Burning Pestle turned Quijote’s romance into a parody of London’s merchant class, piracy, and syphilis. During the failed negotiations of the Spanish Match between Prince Charles and the infanta Maria Anna, Fuchs proves just how often English writers continued to plunder Cervantes and Spain’s vibrant theater, turning “Spanish plots” into racist stereotypes of suspicious “plotting Spaniards.”

Why has it taken so long for scholars to recognize Spain’s obvious influence on English literature—and, one might add, the arc of its empire, in general? Why is it so revolutionary to suggest, as Fuchs argues, that “English literature was deeply transnational” at its founding moment? Fuchs suggests that the disavowal of Spain was itself the move England used to distinguish its literature from that of “the world,” and complicit in that erasure are critics and scholars of literary history who fetishize “‘English’ genius.” To make the point, she takes on the holy grail of Spanish-English literary relations— Shakespeare and John Fletcher’s lost play, Cardenio, inspired by one of Don Quijote’s stories-within-a-story. Just as Don Quijote is the oft-dropped asterisk to England’s claim to have invented the novel, Cardenio, when it is periodically reconstructed, is celebrated as a lost work of Shakespeare, minimizing the Cervantes connection, or taking it as an opportunity to fetishize folkloric, tarantella-dancing Spain, source of English sunburns. All this despite the fact that those reproductions have no Shakespeare-penned script to work from, only a possible eighteenth-century rewrite whose gaps are filled in with Cervantes instead.

Fuchs works the Cardenio–Quijote question to yield a final twist worthy of Jorge Luis Borges. Fellow literary scholar Stephen Greenblatt recently received a Mellon Foundation grant to fund re-productions of Cardenio as “a lost play of Shakespeare’s” throughout the world. Fuchs draws from Greenblatt’s correspondence with Jesús Eguía Armenteros, the beleagured writer who took on the project in Spain, in which the Harvard scholar suggested that the Spanish writer “take the basic source material, the story in Cervantes, and our version of Cardenio and transform it to fit the concerns and the theatrical conventions of Spanish culture and society.” Eguía Armenteros instead began his play with a conversation between ‘The Author” and a character named “Harvard Professor Stephen Greenblatt.” “But I don’t know what the ‘theatrical conventions of Spanish culture and society’ are,” the Author complains.

Who does? But as The Poetics of Piracy shows, they are alive, well, and still intoxicate Falstaff’s heirs.