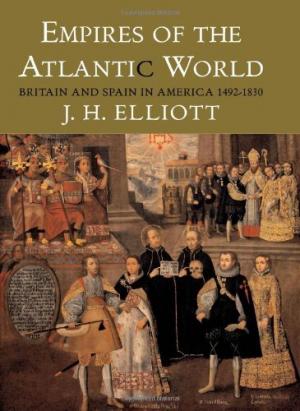 Empires of the Atlantic World is an engaging comparative history of the processes of conquest, colonization, and independence in the British and Spanish American empires. Elliot compares such factors as luck, race relations, and religion in the ways the two systems of colonization—and de-colonization—occurred in the Americas.

Elliot argues that luck, or timing, was one of the most important forces determining the fates of the Spanish and British empires. He claims that Spain’s role as pioneer in the colonization of the Americas was a mixed blessing. Spain had prime access to lands with mineral wealth and cheap labor, but it had to expend a massive amount of effort to consolidate its power over vast reaches of territory, with no useful models of empire to follow. Britain, meanwhile, had to settle for a relatively tiny chunk of land by the time it joined the imperial game nearly a century later, yet had the advantage of the lessons of the Spanish experience. Elliot also emphasizes the importance of timing in the two independence movements. The outbreak of the French Revolution and the Napoleonic Wars helped the new United States expand its trade and solidify its political autonomy, while the Spanish American republics found themselves with few export options to rebuild their war-ravaged economies, thanks to the concurrent peace in Europe.

Another theme that Elliot frequently examines is that of race and its relationship to empire, characterizing the Spanish empire as racially inclusive and the British one as exclusive. The indigenous peoples of Spanish America composed a central part of society, initially as a justification for colonization, then as a source of labor, and finally as an impediment to independence. The British, on the other hand, consistently viewed the native peoples of North America as “others”—competitors for land and a threat to the moral and physical safety of the colonists. Elliot claims that the independence process was later, more prolonged, and more violent in Spanish America in part because the creoles there had more to fear and more to lose from upsetting the status quo with the indigenous population.

Another recurring theme in Elliot’s work is that of religion. He claims that the monopoly of the Catholic Church in Spanish America helped provide structure, stability, and economic investment, but also encouraged intellectual and cultural stagnation. Ironically, when Spain tried to centralize power over its colonies in the eighteenth and nineteenth centuries, it pushed church leaders like Miguel Hidalgo into the forefront of the independence movement.  Elliot credits the Protestant tradition and the religious pluralism in the British colonies, on the other hand, with promoting independent thinking, vitality, and a degree of toleration.

Empires of the Atlantic World is an engaging, informative read for anyone interested in Latin American, European, and U.S. history. Scholars and the general public alike will enjoy Elliot’s latest contribution to the study of the empires of the Americas.