Abdulrahman Zeitoun, a Syrian immigrant turned US citizen, owned a home repair and painting business with his wife, Kathy, in New Orleans in 2005.   When Hurricane Katrina hit the city on August 29 of that year, Kathy and their three children fled the city for Baton Rouge.  Zeitoun, a devoted businessman and neighbor, refused to leave his impending projects.  He hunkered down, readied his canoe (just in case), and rode out the storm.  When the hurricane finally passed, he set out in his canoe to assess the damage to the city, his rental properties, the homes he was repairing and painting, and the offices of his business.

In Dave Eggers’ telling of Zeitoun’s story, the focus is the aftermath of Katrina.  Many of the neighbors that he comes across are elderly, disabled, and trapped in their flooded homes.  More often than not, Zeitoun’s attempts at rescue are impeded rather than helped by the national and local officers and soldiers who feign assistance and then ignore his pleas.  He takes on the daily task of feeding local dogs.  Each day at the same time he returns to a working pay phone in one of his rental units to call Kathy and check in, a mundane ritual that keeps him connected to his family and alleviates Kathy’s worries about Zeitoun’s condition.  When he traveled to his office to take stock of the damage there, he came across a gang of armed men (“criminal opportunists” he called them) stealing from a local gas station and decided to go in the opposite direction.   At one point, while surveying the damage on Tulane’s campus for a professor friend of his, Abdulrahman comes across an acquaintance, Nasser Dayoob, another Syrian immigrant who had fled to the campus when his own home had been flooded.  Zeitoun gave Nasser a place to stay in one his rental units where a renter, Todd Gambino, had weathered the storm. 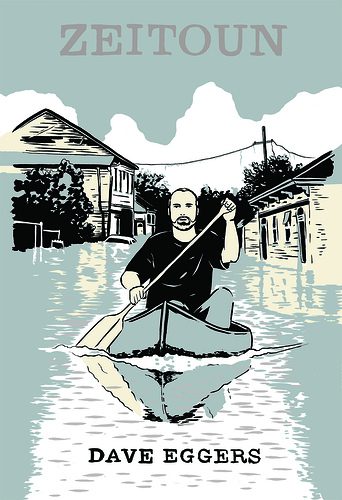 On Tuesday, September 6, when Zeitoun went to the rental unit after making his daily rounds to feed the dogs and check on neighbors, he came across a man he had never met named Ronnie.  Nasser was also there, as was Todd.  Shortly after Zeitoun had finished taking a shower, Nasser yelled for him to come downstairs.  A group of armed and uniformed men were bursting into the house.  They put Adbulrahman, Nasser, Todd, and Ronnie in a boat and took them away.

The second half of Zeitoun’s post-Katrina story, the one that begins with his disappearance at the hands of these men, is riveting.  You follow Kathy as she struggles for weeks to locate him without knowing if he is alive.  She tries to hide her worry from her children while she physically and emotionally unravels at the seams.  It eventually takes a brave act by a person that she does not know for her to find Zeitoun.  Where he is and what has happened to him is both shocking and obvious.

Zeitoun was a man at the intersection of multiple tragedies: the destruction by the hurricane, the chaos of the aftermath, the post-9/11 fears about Muslim Americans, and the pervasiveness of the “war on terror” into our own cities, homes, and lives.  Dave Eggers’ Zeitoun leaves you understanding that no matter what mother Earth can do to us, we can always do worse to each other.