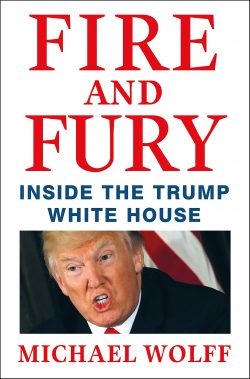 Donald Trump responded to Michael Wolff’s Fire and Fury: Inside the Trump White House in a predictable way. The President launched an incoherent, childish tweetstorm, labeling Wolff “mentally deranged” and an agent of the “Fake News Media,” which, typically, drew even more attention to the book. Indeed, in the hours after the President’s tweets, Fire and Fury shot to the top of the New York Times’ bestseller list. In his alleged exposé of a scandal-ridden administration, Wolff promised to include everything in this new work, from insider’s knowledge of the frigid marriage between the President and First Lady, to Ivanka Trump’s mockery of “the Donald’s” hair. Fire and Fury proved almost instantly popular amongst an exasperated American electorate, regardless of methodological problems that dominate the work.

Does Wolff’s book merit serious consideration from scholars? Is it an historical account? Fire and Fury does not seem to fit the typical model of a presidential history. Wolff’s work seems most similar to political journalist Joe McGinniss in The Selling of the President 1968. Unlike, say David McCullough’s John Adams and David Herbert Donald’s Lincoln, which rely on meticulous research to evaluate the President’s accomplishments throughout the course of a presidency, McGinnis and Wolff hone in on a few short months at the beginning of the president’s term. McGinniss followed the presidential campaign of Richard Nixon, often seen as Trump’s closest historical parallel. Both McGinniss and Wolff benefit a great deal from their insider’s access and a sensationalist writing style in the midst of presidential scandal.

Even as a work of journalism, though, Fire and Fury defies convention. Wolff often inserts tawdry detail and gossip that would be incredibly difficult to substantiate. While this makes it problematic to verify, Fire and Fury does capture the flavor of White House operations in a way that traditional reporting does not. For instance, it may be hard to verify that Ivanka Trump and Dina Powell tried to convince Trump to take a “presidential stance” regarding human rights atrocities using a PowerPoint of graphic, violent imagery or that Trump then poured over for hours and showed to others, but the inclusion of this gossip gives the reader a window into the character of the President, even if it is based on rumor. 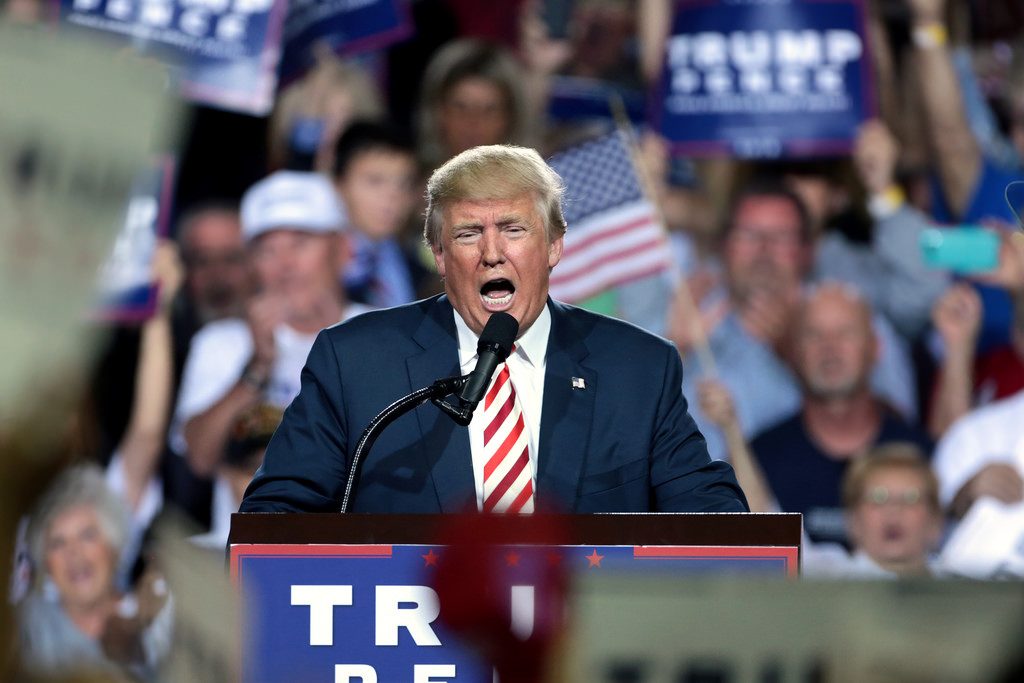 Fire and Fury is especially useful in understanding the flawed cast of characters that vie for control over Trump and his “agenda,” (something Wolff doubts really exists). Traditional media coverage, understandably, focuses to such a degree on the President that his backdrop of enablers, at times, fades into the background. According to Wolff, the failures of the Trump administration can be tied directly to the mismanagement and political infighting of the fools surrounding him, including General H.R. McMasters and Reince Priebus. Throughout Fire and Fury, Wolff contends that the current state of the administration springs from a basic fact of the Trump administration: that the current POTUS never actually wanted to win the presidency. The Trump family, according to Wolff, saw the 2016 election as a grand moneymaking scheme, only seeking to elevate their national profile—and their brand revenues. After his surprise win, Wolff argues, Trump entered the White House particularly unmoored from reality, governed solely by personal impulse and self-gratification. The excesses and corruption of the current administration emerge in startling display and Wolff persuasively shows the collective inability of Washington’s establishment to curb the impulses of the White House. 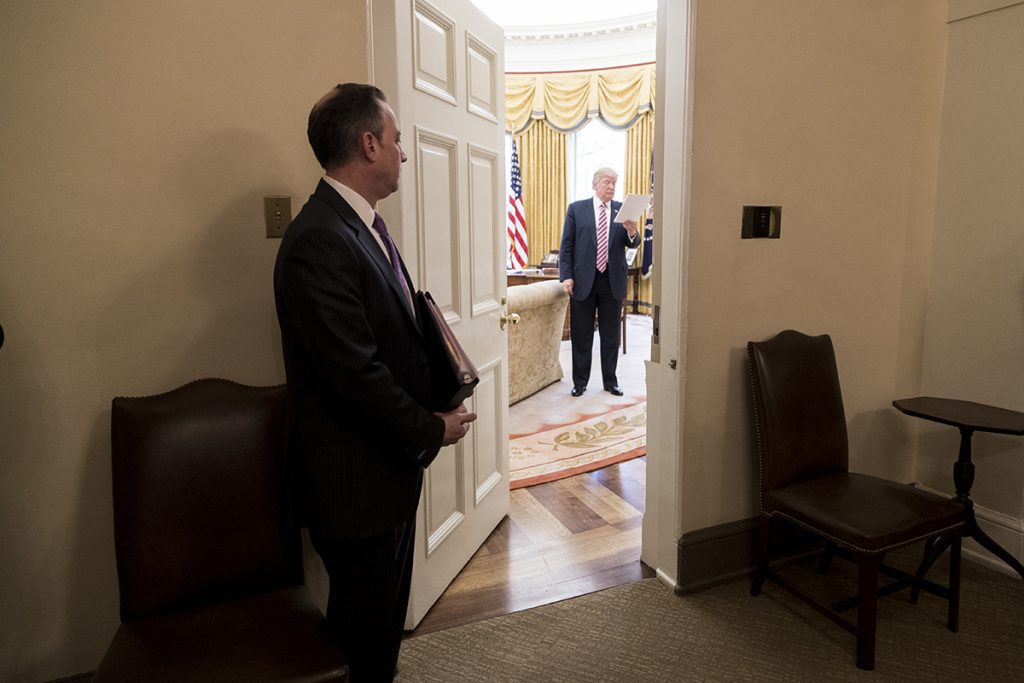 Former Chief of Staff Reince Priebus looks into the Oval Office as President Donald Trump reads over his notes, Friday, March 10, 2017, prior to meeting with the Healthcare Specific House Committee Leadership at the White House (Official White House Photo by Shealah Craighead, via Wikipedia)

Wolff suspiciously manages to hit almost all of the mini-presidential scandals that seem to emerge almost daily with the current administration, an impressive feat. For instance, Wolff has a knack for bringing seemingly disparate political moments together. One chapter manages to connect Trump’s frustrations over the situation in Afghanistan and his issues with General H.R. McMasters to the decision to bring in Anthony Scaramucci. In doing so, Wolff creates the breakneck pace of news since Trump’s inauguration and brings the reader into the center of an ongoing crisis in which Trump’s lackeys try to use one crisis to resolve another. Unsettlingly, and predictably, Trump’s messengers seem as overwhelmed as the rest of the American populace.

Unfortunately, Fire and Fury is riddled with methodological problems. Wolff consistently fails to cite sources. Speculation is indistinguishable from on-the-record quotes throughout. Tracing Wolff’s line of argumentation is impossible, because he masks much of his evidence under the guise of protecting sources. Wolff uses this umbrella of protection even when using full quotations from figures like Steve Bannon and Jared Kushner—a highly unorthodox use of journalistic convention. Furthermore, Wolff uses Trump’s ill-preparedness for the highest office in the land as proof that Trump “never wanted to be President.” He ignores the fact that Trump has publicly flirted with the idea of running for president since the 1980s, even discussing it on national television with Oprah in 1988. Whether or not these were sincere ambitions, Trump clearly desired the power and influence that came with the presidency. Wolff’s shortcomings not only dilute his arguments, but bring the rest of his work into question. 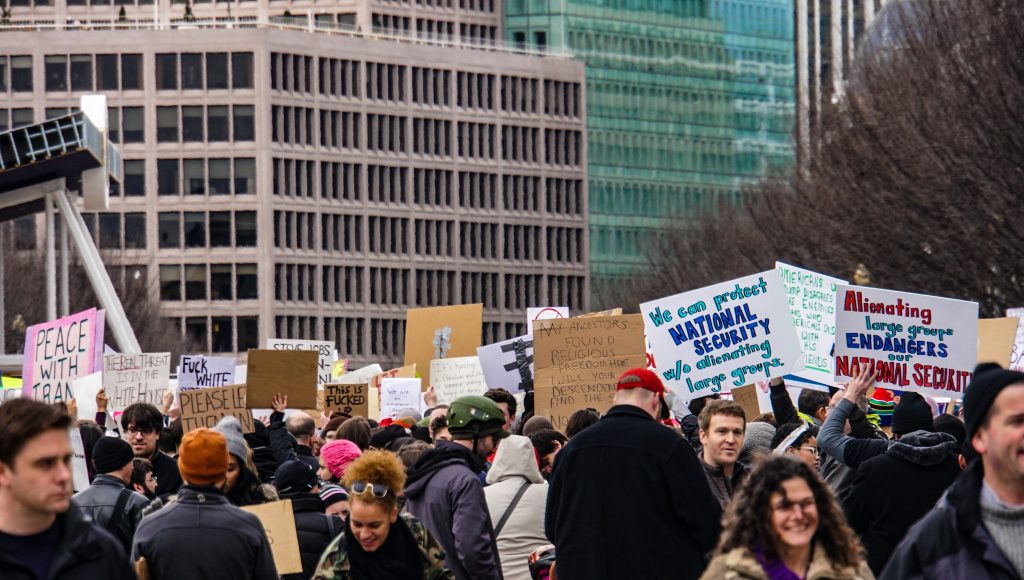 Protest against Presidential Executive Order banning entry of citizens of Muslim-majority countries into the United States, in front of the White House, Washington, DC (via Wikimedia Commons)

The most glaring problem in Fire and Fury is Wolff’s treatment of the President’s connection to white supremacy. Throughout the book Wolff portrays Trump as an incompetent, narcissist, incapable of thinking outside the paradigm of personal vanity. However, Wolff ignores how Trump uses white supremacy to maintain a connection with his most ardent supporters. Look no further than the President’s disgusting comments regarding Haitian and African immigrants that he hoped would play well with his base. Yet, Wolff argues that not only are left-wing accusations of Trump’s racism “hysterical,” but also that white supremacists like Richard Spencer prove “pesky” for the White House. Wolff claims that he only criticized former National Football League quarterback and activist Colin Kaepernick because Trump was annoyed that he wasn’t getting the attention he felt he deserved. Instead of acknowledging proof of the President’s calculated racism and his active connection with white supremacists, Wolff insists Trump merely “tolerates a race-tinged political view.” By hedging his discussion of the racism of the Trump administration, Wolff manages to create an image of the President as an almost entirely impulse driven figure without political calculation. Undoubtedly, impulse and narcissism govern the President. But to depict Trump like this ignores the President’s long history of racism going back to the 1970s, with notable examples including avoiding renting to African-Americans, taking out full page ads in New York newspapers urging for the death penalty of the Central Park Five in 1989, and calling his black casino employees “lazy.”

Wolff calls Fire and Fury “explosive,” but in reality, it validates much of the current speculation regarding the gross incompetence of the Trump administration.  Readers should take caution, however, with Wolff’s portrayal of a child-like President. Throughout most of Fire and Fury, Wolff argues that Trump and his colleagues have no idea what they are doing. But, perhaps the exact opposite is true.

Also by Augusta Dell’omo on Not Even Past:

The Impossible Presidency by Jeremi Suri
The Ideological Origins of a Cold War Warrior: John Foster Dulles and his Grandfather by Paula O’Donnell
Foreign Policy from Candidate to President: Richard Nixon and the Lesson of Biafra by Roy Doron