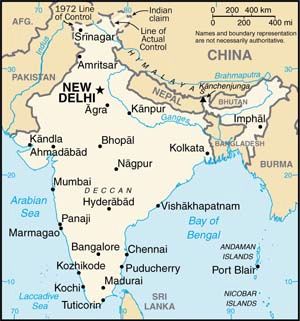 Map of India (via State Department)

In 1947, when British India was carved into two states of India and Pakistan, many Hindu families relocated from eastern Pakistan (which became Bangladesh in 1971) to Indian Bengal. My parents came from two such families. My father was deeply curious about the world, and bought various Readers Digest and National Geographic publications on a meager rupee-based salary, earned as a doctor in the postcolonial Indian army. My youth was shaped by his predicament, balancing between his own ‘outsider’ status in the complex social-political world of postcolonial India, and the straining to flee these complexities for a world conjured up by books, theater, film.

In the 1980s, when I wanted to pursue research in history, funds were scarce. I worked as an adjunct at various women’s colleges for some years, learning to teach neo-literate young girls about distant places and long-ago events in Hindi when necessary. I met my partner, another historian, at a teacher’s strike for better wages during one such stint. Five years later, a scholarship to pursue research in School of Oriental and African Studies (SOAS), University of London, finally gave me the chance to belong to the land of books my parents had taught me to love.

The wealth of records in the SOAS Library, British Library and the British Museum convinced me to remain in the field of teaching and research, and to make these gains available to others in the country of my origin. But the country of my birth-origin had moved on by the late 1990s. Though I resigned my tenured job of teaching in a college of Delhi University, and moved to a full-time research position in my mother’s beloved city, Calcutta, the ethnic-linguistic and religious sectarianisms of the closing years of the millennium also narrowed research agendas. The Indian elections of 1998 were decisive in that regard. My life in research, as distinct from my partner’s, was over if we did not relocate. By 2000, we had both begun another version of ‘outsider’ lives, this time in the North American academe, he as a chair-holding professor, and me as a spouse on a visa that disallowed paid employment! Then began the struggle to secure work-authorization and the green card (resident status), learning the rituals of professional belonging – the job-search, from letter-writing to securing letter-writers for one’s own research, the social codes undergirding the profession. Mercifully, there were the Journal of Higher Education, various web-sites for applicants, and more than a little help from my friends. With all these tools, a brave Black feminist Chair heading a search at Rutgers University, New Brunswick, NJ and an inheritance of survivorship, I entered the academic workforce in 2001. And here I am, a citizen, learning my way through the delightful open stacks of the Perry Castañeda Library, willing to do whatever it takes to preserve this new country of mine for the perpetually curious.