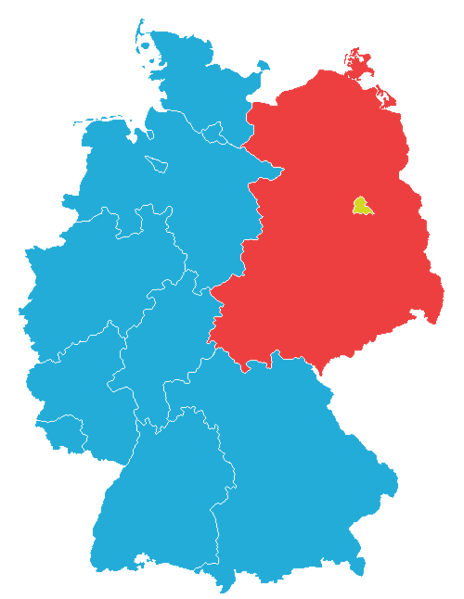 Map of West Germany (in blue), where Dr. Butler was born (via Wikipedia)

I can’t claim to have a particularly fascinating or intrepid migrant story, just a slightly convoluted one: I came to the US from the UK in 2008, though I had not lived in “my” part of the UK, England, for five years before that because when I moved here, it was from Belfast in Northern Ireland. Even the “my” feels a bit elective, since I wasn’t born in England but in West Germany as the child of a British services family, and have spent a lot of time living in and studying Mexico. All of this is to say that people can have multiple and cumulative senses of belonging and that borders are often arbitrary things––just as that archaic-sounding phrase, “West Germany,” tells us. I came to Austin to work, then, pure and simple, but expecting that home would soon be where the heart is. Sometimes, actually, I think Texas claimed me long ago because I have always been fascinated by vaquero-culture; I still like the fact that a bus ride to UT down I-35 rolls along the Chisolm Trail. Really I came to Austin because UT has a brilliant Latin American History program with an incredible library and archive, the Benson Collection, largely focused on Mexico. And sunshine, which hasn’t been invented in England yet. I’ve stayed in Texas because I like it (mostly), because my son was born here, and because my students are always teaching me new things. Mexico is also our neighbor: for me it’s a privilege to work in a University that has such historic and actual ties with the country I study, and so many Mexican and latino students.