This Associated Press photograph was taken in 1966 to accompany an article by Frances Lewine about Lady Bird Johnson’s beautification project, entitled, “Her Program’s Progress.” 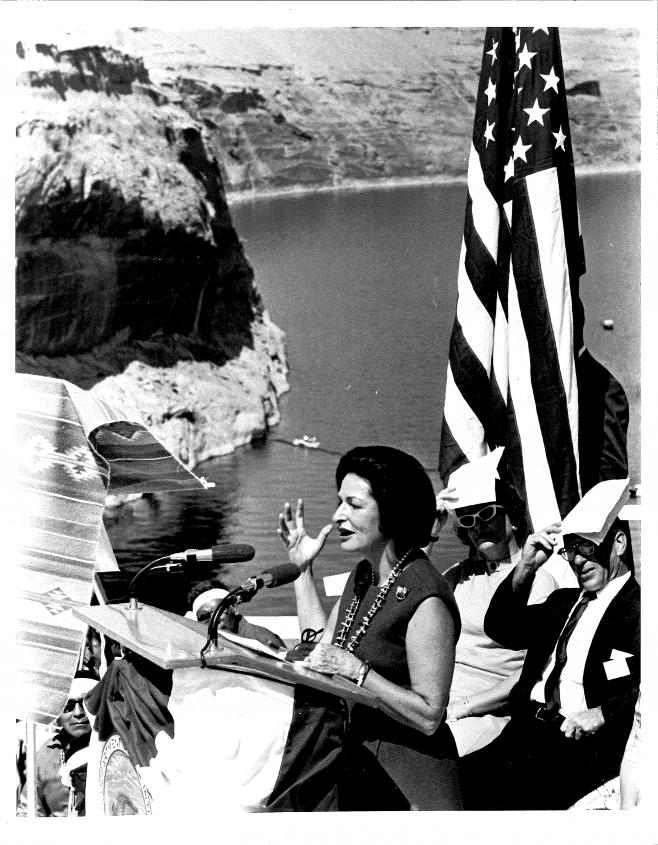 “Mrs. Lyndon Johnson has begun a national movement to eradicate blighted and ugly scenery from America, feeling ‘ugliness is an eroding force on the people of the land.’  On visits to small towns, large cities, national parks and points of scenic and historic interest, she related such visits to the benefits of natural beauty. She has been instrumental in legislation and donations to improve, clean up or renovate national eyesores everywhere. Here, before a backdrop of Lake Powell, Mrs. Lyndon Johnson speaks at dedication ceremonies of the Glen Canyon Dam near Page, Arizona, in late September 1966.”

When Lady Bird took the podium, as one of a host of national and local politicians, she pointed out that the region surrounding the dam “consists of eons of time laid bare – on stone pages and in the treasure troves of Indian myths and artifacts” that would make the resulting Lake Powell “a magnet for tourists.” Evoking the genius of technology, the conservation of water, and the spirituality of nature, she remarked, “To me, the appealing genius of conservation is that it combines the energetic feats of technology – like this dam – with the gentle humility that leaves some corners of the earth untouched – alone – free of technology – to be a spiritual touchstone and a recreation asset.”

Only a decade earlier, the area that Lake Powell flooded had been a vast, arid desert, peppered with ancient American Indian cliff dwellings and majestic rock structures, like Rainbow Bridge. The resulting reservoir was impressive given that it filled up a network of side, slot, and crater canyons measuring more than 150 miles long and with a shoreline longer than the east coast of the United States. The dam — a barrier of five million cubic yards of reinforced concrete (more concrete than was used in Hoover Dam) — was hailed as one the “the engineering wonders of the world” by the Bureau of Reclamation as well as local newspapers, and state and local officials in both Arizona and Utah. It was honored as “the outstanding engineering project” by the American Society of Civil Engineers.

Yet, among environmentalists it was (and is) considered one of the nation’s most controversial projects. Flooding the canyon disrupted the free flow of the Colorado River, destroyed the original natural beauty of the site, and made dozens of plant and wildlife species extinct.

Clearly, beautification was in the eye of the beholder. For Lady Bird Johnson, as well as many other Americans, technology did not necessarily ruin nature. Later on this leg of her 1966 Beautification tour, she also paid a brief visit to San Ildefonso Indian Pueblo, dedicating a highway and a park and planting seedlings. All of this earned her the nickname: “Our First Lady of National Beautification” from the New York News on November 13, 1966.

Often when thinking about Lady Bird Johnson’s Beautification Program, we overlook the ways she celebrated technology as much as nature — especially if it aided people’s access to nature or natural resources.

This essay will be included in Erika Bsumek’s forthcoming book: Engineering Glen Canyon: Mormons, Indians and the Damming of the American West, 1840-1983

Photograph: from the author’s private collection.