History can sometimes surround us – sometimes it’s even underfoot. This rug, from the Art and Art History Library Collection at the University of Texas, represents the kind of textiles that were made by skilled Navajo weavers and sold on the Navajo reservation from the late 19th into the early 20th century.

The attractive geometric designs of such creations corresponded with other fashion forward styles of the era and they became popular additions to dens and “Indian corners” across the U.S. Navajo rugs have had a lasting influence on interior design ever since. Consumers currently spend millions of dollars every year for antique rugs and blankets, newer rugs still being created by Navajo weavers, or even the less expensive “American Indian style” rugs made in Mexico or India.

So, what’s the history of a rug like this one and why should we care about it? One view is that after the arrival of the Spanish and the introduction of sheep in North America, weaving became central to the development of trade goods throughout the Southwest. Thus, Navajo textiles reflect Spanish influence and cultural exchange. When Anglos began settling in the region, they developed a taste for woven goods and further altered the trade. Traders encouraged weavers to include borders, like the Greek key style design found in this rug, similar to those found on Persian rugs. 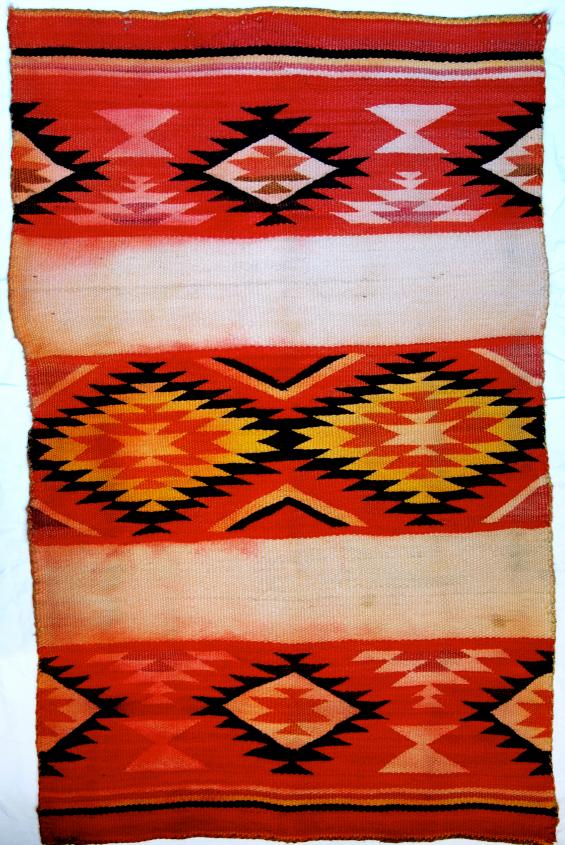 In the 1880s, the white traders who encouraged these changes knew that the beautiful Navajo textiles could be sold to white consumers – if marketed correctly. Another view, the Navajo view, is that Spiderwoman (a key spiritual figure in Navajo cosmology) gave Navajo women the skill they needed to fashion cotton and wool into beautiful creations to trade and feed their families.

Traders like Lorenzo Hubbell, who ran the Ganado Trading Post in Ganado, Arizona, turned their attention to selling Navajo rugs as a way to generate income for the post. Hubbell’s first step was to convince famed hotelier Fred Harvey to stock his hotel gift shops with Navajo blankets and rugs. Harvey also used Navajo rugs as decorative accessories throughout his hotel. This meant that railway tourists to the Southwest could simply stroll into the hotel’s lobby, see the beautiful the rugs used throughout the hotel, enter the store, and purchase a rug to take home. Beyond Harvey’s gift shop sales, traders like Hubbell also published catalogues that they shipped to potential customers or curio stores throughout the United States. The text and advertisements that appeared in trader catalogues promoted the traders as much as, if not more so, than the weavers.

This kind of marketing made Navajo textiles part of an emerging fascination with “primitive’ peoples. By the early 1900s, Americans across the United States were collecting goods from Africa, Asia, and the American Southwest. Just as painters like Picasso began to include elements of indigenous art in modernist art forms, consumers could buy goods that reflected similar design elements: geometrical, bold, abstract.

As consumer fascination with Navajo rugs took hold in the marketplace, rugs grew in value. But, where were the weavers who made the products? How were they treated? Ironically, although Navajo textiles took on social value, Indians were being de-valued in society. Government efforts to assimilate Indians remained strong well into the twentieth century. In response, Navajo weavers, in particular, have worked to preserve their culture through their weavings. So, the next time you see a Navajo rug, you might want to consider its history – and more importantly, the history of the people who made it.

Read more about the marketing of Navajo crafts: