Most days Clyde Rabb Littlefield may be found busily managing a real estate investment and property management business from a small office adorned with Longhorn sports memorabilia in the historic Robinson-Rosner building in downtown Austin.  Littlefield holds two degrees from the University of Texas at Austin (B.A. ’53, M.A. ’57), neither of which is in the field of history, but everyone who knows him knows that Littlefield is first and foremost a historian, with a particular interest in the early history of the institution that he and his family have been intimately connected with for over a century. 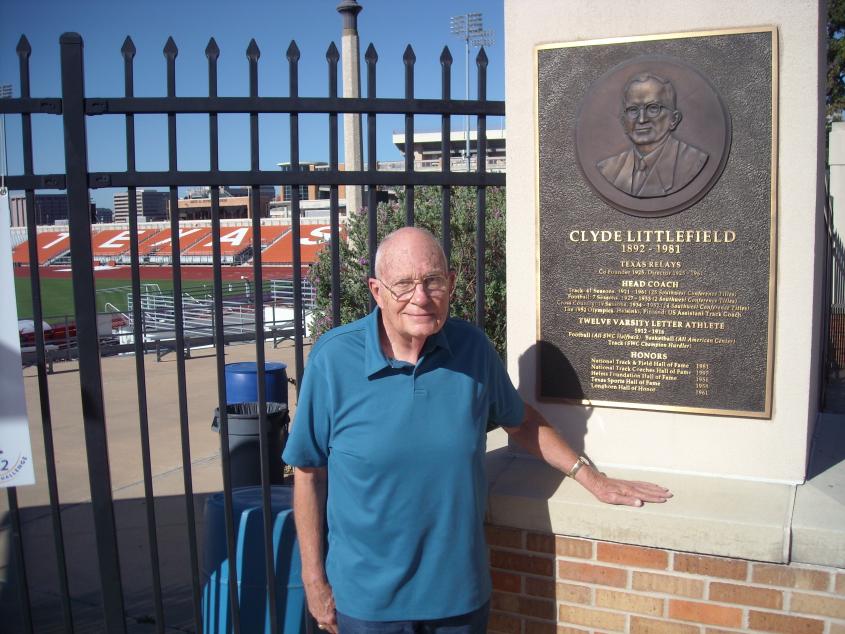 Clyde Rabb Littlefield standing next to a plaque memorializing his father.

As a native of Austin and two-time alumnus of UT, Littlefield bleeds burnt orange. In fact, his connection to the University of Texas is genetic. His father, Clyde Littlefield, was a legendary athlete and coach for the Longhorns. The elder Clyde was one of a duo of famous, albeit unrelated, Littlefields who left a significant mark on the University of Texas. George Washington Littlefield (1842-1920), a member of the Board of Regents and important early donor to the University, endowed the Littlefield Fund for Southern History, the iconic Littlefield Fountain, and the sometimes controversial South Mall statuary on the Forty Acres campus. In contrast, Pennsylvania-born Clyde Littlefield (1892-1981) began his career in Austin in the fall of 1912 as a freshman student athlete from the oil boom-town of Beaumont, Texas. By the time he graduated in the spring of 1916, Littlefield was a twelve-time letterman, an all-Southwest Conference athlete in football and basketball, an all-American in basketball, a conference hurdles champion in track, and had equaled the world record in high hurdles in 1914. According to his son, Littlefield only lost one race during his entire collegiate career. After a brief stint in the Army followed by some high school coaching, he returned to Austin and coached football, basketball, and track until 1962, winning twenty-five Southwestern Conference titles in track and field and two conference titles in football. Clyde Littlefield’s most enduring legacy at UT is the Littlefield Texas Relays, a major national track and field event. A campus road adjacent to the track stadium bears his name and he is memorialized in the Longhorn Hall of Honor and on a plaque located at the gate to Mike A. Myers Stadium.

Having virtually grown up in the shadow of the UT Tower, it was only logical that Clyde Rabb Littlefield would become a Longhorn himself. Upon entering the University in the fall of 1949, he enrolled in Air Force R.O.T.C., a new program on campus resulting from the Air Force’s establishment as a separate military branch in 1947. “Well,” recalls Littlefield with a laugh, “when I joined ROTC as a freshman it was not popular. And then the following summer the Korean War broke out, and to avoid the draft it became popular!” He graduated in the spring of 1953 with a bachelor’s degree in Government. After commissioning as an Air Force officer, Littlefield received orders to Korea and soon found himself on a troop ship crossing the Pacific Ocean. Arriving shortly after the cease-fire took effect on the Korean Peninsula, Littlefield’s unit decided that it needed a historian and he recalls that “they discovered that I minored in history.” This fortuitous discovery would have a major impact on Littlefield’s career for decades to come.

Second Lieutenant Littlefield was soon slotted as a unit historian, an assignment that proved very memorable for the young officer. After being assigned to Advance Headquarters in Seoul, Littlefield remembers being sent to the Demilitarized Zone in a Jeep with an armed escort to carry an important message to the United Nations commander: a North Korean MiG had been shot down in the first major incident after the July 27, 1953 cease-fire. He recalls that during this incident, “They didn’t trust electronic communications, so that’s why they sent me.” An assignment to Headquarters also meant that Littlefield had the opportunity to travel widely in East Asia and the Pacific. During his service in the Air Force he visited the Philippines, Japan, Thailand, Macaw, Hong Kong, and Iwo Jima in both official and unofficial capacities. Upon completion of his Active Duty service, Littlefield made the ten-day Pacific Ocean crossing to the United States on a troop ship. 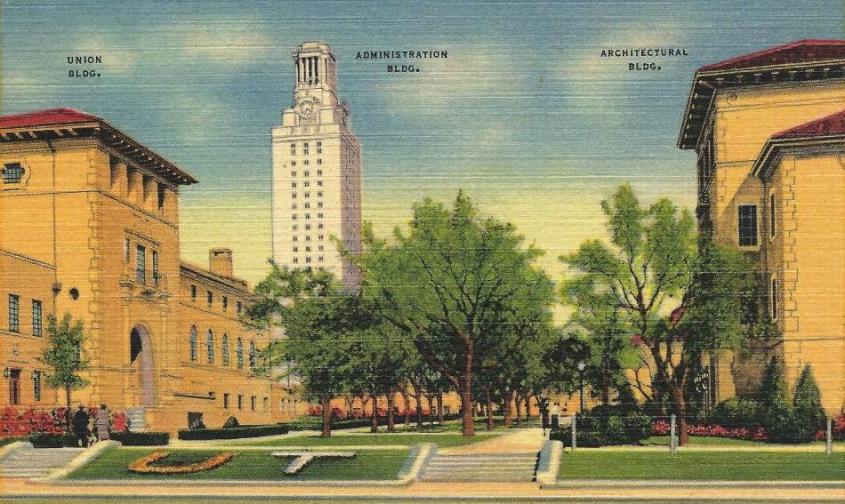 After returning to Austin, Littlefield pursued a master’s degree in Government at UT, graduating in 1958. His thesis, “American Assistance to Japan, 1945-1956,” was inspired by his experiences in war-torn East Asia, especially his realization that “in California seemingly so much concrete was around, relative to Japan or Korea.” After receiving his M.A., Littlefield worked briefly for Hughes Tool Company in Kansas, and subsequently found a job as a civilian historian for the Department of the Air Force. He continued to work as an Air Force historian for the next twenty years, retiring in 1980. Along the way Littlefield was able to continue his love of travel, living in such locations as Los Angeles, Kansas City, Wiesbaden, Germany, Honolulu, Hawaii, and Washington, D.C. His stint in Hawaii encompassed Vietnam War operations and he later authored a white paper on the proposed B-1 Bomber while working in Washington, D.C. Upon retirement, Littlefield returned to his hometown and embarked on his current career in real estate investment and property management. Littlefield laughs when recalling the changes he found in Austin when he returned: “You know I naively thought when I was moving back here from [the] Washington, D.C. area that I was going to know everybody! Because when I was growing up we only had one high school, well one white high school anyway. So even though it was very large you tended to – if you didn’t know of somebody you knew somebody who knew somebody type thing. But of course, when I got back that didn’t exist at all.”

Clyde R. Littlefield’s interest in history did not end with retirement from the Air Force. Today he spends much of his free time researching the first decades of The University of Texas, exploring the origins of Roundup, Bevo, and “The Eyes of Texas” as well as the origins and fates of a wide range of individuals who shaped the early history of the school. In 2004 his research produced a book on the early history of Kappa Alpha, his fraternity while a student at UT. He has spent so much time at the Dolph Briscoe Center for American History that he now sits on the advisory board for the internationally renowned archive. 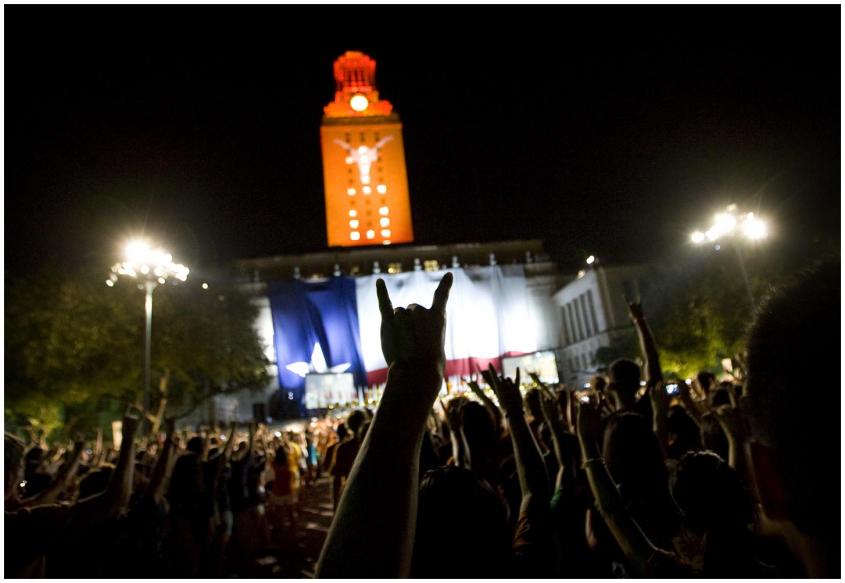 Through his research and his own lifetime of experience at UT, Littlefield has seen many sweeping changes. The athletics program has evolved from the days of student club teams that played and sometimes lost to prep school squads to a professionalized department generating hundreds of millions of dollars in revenue each year. Littlefield recalls that the friendship between his mother and Rowena Bible, wife of Coach Dana X. Bible pre-dated Bible’s move from Texas A&M to UT, noting that “in those days people knew each other pretty well. There weren’t too many … extra coaches running around shall we say.” Overall, until recent decades athletics were “more amateurish, less commercial. Remember, we didn’t have commercial television here until the 1950s. I think the timing of any game was not driven by television. And it was very predictable. I remember, let’s say a football game, you almost always knew when it was going to start. Because that was the set time,” he concludes with a chuckle. The growth of the University itself has been equally astounding. Littlefield’s believes that “when I was in school and before, I think the University was more personal. And I’ve got the impression today it’s much more bureaucratic.”

Massive growth in the state of Texas, the city of Austin, and at UT have combined with wide ranging social changes to render the UT of 2013 a vastly different place from the slowly desegregating campus Clyde R. Littlefield encountered as a freshman in 1949, to say nothing of the small town university his father Clyde Littlefield entered in 1912. Whatever the future holds for The University of Texas, one thing is certain – the Littlefield name will remain synonymous with the Forty Acres, as it has for the past century.

Learn about Austin’s bygone streetcar system and the founding of UT’s Physics department in 1883.