In the wake of the recent events in Tunisia, Egypt, Libya, and elsewhere in the Middle East, many try to predict whether Islam can exist together harmoniously with democracy. 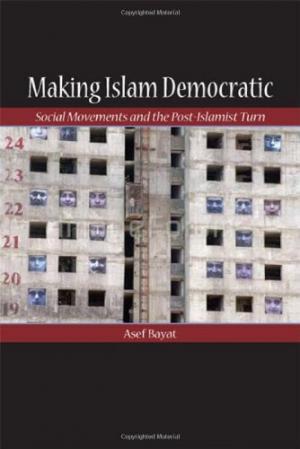 In this book, Bayat successfully dismantles the presumptions that constitute this discourse, by stating in the beginning that “the question is not whether Islam is or is not compatible with democracy, or by extension, modernity, but rather under what conditions Muslims can make them compatible.” In order to answer this question Making Islam Democratic closely examines the different trajectories of two countries with similar socio-religious backgrounds: Iran and Egypt. Specifically Bayat asks why Iran produced an Islamic revolution, while Egypt developed only an Islamic Movement.

Bayat first analyzes Iran as a “revolution without movement,” arguing that as a result of years of a repressive political system the clergy failed to build social infrastructures and thought that the way to gain political influence would be to “recruit” the intellectual elites to their side. While they were successful in creating national-religious discourse among the intellectual elites, they “lost” the masses to other ideologies, such as Socialism, Marxism, and Secularism. The public heavily consumed western cultural products, magazines, movies, and books. During the revolution in 1979, the different sectors “were pushed into the arms of Shi’a clergy” to lead the revolution, but sectarianism remained present and vital.In Egypt, on the other hand, the Islamic parties could not participate in the political game, but succeeded in winning the hearts and minds of the population by establishing a wide system of education, healthcare, banking and social welfare that benefitted the poor and traditional population of Egypt. The decision of the Egyptian ‘ulema (Muslim jurists) not to attempt to take over the government but rather to win the population allowed them work and prosper with government consent, and was therefore able to influence and Islamize society, which became significant later (as recently seen). This model can be useful to some extent in looking at other instances such as Turkey and Jordan.

Bayat has succeeded in writing a clear and jargon-free book. He supports his argument on profound research in these two telling case studies. This book eloquently refutes many common beliefs and anxieties about Islam and democracy.