Four hundred and fifty miles west of the University of Texas at Austin, thirty-seven miles (as the car drives) north of the town of Marfa, Texas, and almost 6,800 feet above sea level sit the white and silver domes of the McDonald Observatory.  Each dome shelters an enormous, yet delicate, tool: a combination of mirrors, metal, and electronics capable of gathering light from long ago and far, far away.  Decades are a relatively tiny unit of temporal measurement on an astronomical scale, and the distances between terrestrial points are vanishingly small compared to the distances between celestial bodies.  In historical terms, however, the transformation of the McDonald Observatory from a peripheral startup into an internationally recognized hub of scientific research was no small step.  The forty-year interval between 1934 when the observatory came into existence and 1973 when McDonald personnel and UT faculty traveled to Mauritania to study the longest solar eclipse of the twentieth century was a period of truly giant leaps for science in America and in the southwest in particular.  It was during these years that the National Science Foundation (NSF) was born and grew into an institution of enormous financial importance for researchers.  The McDonald Observatory, like many other science facilities, owes a great deal of its success to the Foundation and to the political environment that prompted the Foundation’s creation.

The land and money for the observatory came from the estate of one William Johnson McDonald, born in the Republic of Texas in 1844.  McDonald served in the Confederate army during the Civil War and later became a wealthy banker.  When he died in 1926, his will bequeathed nearly one million dollars to The University of Texas to build an Astronomical Observatory. By 1934, UT had an astronomical observatory in the mountains of west Texas but no astronomers to staff it.  The school’s lack of trained astronomers reflected a gap in the scientific capabilities of western and eastern universities prior to the Second World War.  Historian George Webb describes the southwest in the early twentieth century as a “colony” of American science: the region was valuable to eastern-based researchers as a source of exotic flora and fauna, and to astronomers for its dark, clear skies, but it lacked top-tier research institutions of its own.  New facilities like UT’s McDonald Observatory began to narrow the gap, but it had to fill positions with scientists from the University of Chicago.

World War II brought about a major restructuring of federal financial support for academic science research.  Scientists’ contributions to the war effort proved invaluable and the sparsely populated southwest had offered an ideal testing ground for dangerous and highly classified projects.  McDonald Observatory staff, for example, took part in military rocket propulsion studies in the New Mexico badlands near the secret atomic research complex at Los Alamos. Toward the end of the war Vannevar Bush, head of the military’s Office of Scientific Research and Development and a former MIT administrator, drafted a proposal for a new federal agency devoted to science funding.  Bush’s vision was realized in 1950 with the creation of the National Science Foundation, whose mission was to support the development of academic science programs and research facilities throughout the nation.  Prior to the establishment of the NSF, university science departments had received the bulk of their funds from state governments, private donors, and student tuition.  Over the course of the 1950s the NSF’s purse grew to surpass anything these sources could have matched.  The Foundation’s first annual budget was a modest $3.5 million, but when the Soviet Union launched the satellite known as Sputnik in 1957 Congress raised the figure to $130 million.  By 1970, the NSF commanded half a billion dollars each year and had distributed a grand total of $4.72 billion to science departments around the country.

Texas recruited Harlan J. Smith, a Yale astronomer, to chair the new department and head up the observatory.  To the Harvard-educated Smith, leaving Yale for Texas was like entering an “astronomical wilderness.” But Harlan Smith dreamed big, and saw opportunities where others saw obstacles.  For example, he spoke publicly and often of his desire to see humans colonize the moon and Mars.  He imagined setting up an observatory on the far side of the moon, and eventually made sketches of such a hypothetical extraterrestrial installation.  He also directed his energies toward more immediate projects.  In addition to overseeing the construction of the new, NASA-funded reflector, Smith won a NASA grant to refurbish the observatory’s two original telescopes.  He also reached out to the general public by helping to create a syndicated radio program devoted to astronomy news and facts, Stardate, which still airs on public radio stations nationwide.

By the early 1970s the McDonald Observatory was ready to embark on its most ambitious project to date: an expedition to the deserts of northwest Africa to conduct delicate observations of a solar eclipse that would take place on the morning of June 30, 1973.  By photographing stars that become visible near a fully eclipsed sun and comparing those images to photographs of the same stars at night when the sun is not present, slight differences in the apparent positions of the stars should become visible. The disparity is the result of the sun’s gravity bending the path of starlight that passes near it. Ever since Albert Einstein predicted this gravitational deflection of light as part of his theory of relativity, scientists realized the importance of measuring the exact amount of bend.  Among its most familiar applications today, the calculations are used to acquire more precise GPS satellite measurements.  The 1973 eclipse, however, would not be visible over McDonald or any other such structure in North America. Scientists would have to journey to a part of the globe few outsiders knew well, where sandstorms and 110-degree heat threatened to wreak havoc on their delicate instruments. The eager scientists of the McDonald Observatory hoped the NSF would agree to finance the high-risk, high-cost, high-reward expedition to a site in the newly-independent Islamic republic of Mauritania. 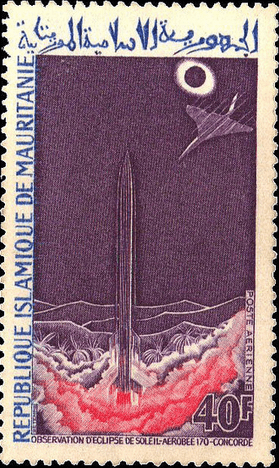 In May 1972 the observatory’s planning team drafted a NSF grant application for the amount of $302,848.  Several factors made approval of the grant unlikely.  First, the UT team was not the only group requesting NSF money to travel to Africa for the eclipse.  Second, the amount the team requested was unrealistic in the political and economic climate of 1972.  The NSF requested $622 million in 1972, a record high, but the funding it received still didn’t compensate for inflation.  Using 1972 dollars as a baseline, federal funding for academic research grew by an average of thirteen percent each year between 1953 and 1968, but zero percent for the period 1968 to 1974.  Economic problems, social turmoil, and the ongoing war in Vietnam drove policymakers in Washington toward greater fiscal austerity.  In 1971 scientists feared that the NSF was becoming more sensitive to federal politics than to their research needs. From June 1970 to March 1971 the NSF received 20,000 grant requests for a total amount of 2 million dollars.  Of these, the Foundation approved fewer than 7000 grants and distributed only $320,000 to support new projects.  In September 1972 Smith received a form letter from the NSF bearing the worst possible news: the Foundation had rejected the team’s grant application.  Yet hope was not lost.  The team scrambled to find other sources of funding and eventually received sizable grants from NATO and the National Geographic Society.  They slashed their budget by trimming the expedition to its bare essentials, and submitted a new proposal to the NSF for $65,000.  The University of Texas received notification of NSF approval on December 19, 1972.  The McDonald expedition was officially a go.

The story of the team’s travels in Mauritania is fascinating from cultural, political, and scientific perspectives.  Interested readers should consult team member David Winget’s memoir of the experience, Harlan’s Globetrotters: The Story of an Eclipse.  The team faced persistent heat and a sandstorm on the morning of the eclipse that only cleared ten minutes before the long-awaited event.  Despite these obstacles they successfully captured high-resolution images of a starfield near the eclipsed sun and used those photographs to calculate a value of light deflection consistent with Einstein’s predictions.  Though this was not the final experiment to put Einstein’s theory to the test, it was perhaps the last of its kind.  Later efforts would employ new technologies such as space-based telescopes and radio astronomy rather than risking ground-based visual observations under challenging field conditions.

Yet it is precisely the difficult and costly nature of the 1973 McDonald expedition that makes it a significant event in the history of American scientific research.  The ambitious project was possible only because of the revolution that had taken place in science funding during World War II and the early Cold War, a development that breathed new life into once-marginal facilities like the McDonald Observatory.  The Mauritania mission was a demonstration of how far the observatory—and American and southwestern science writ large—had come, and how far each party to the process was willing to go to uncover the universe’s secrets.

Unknown photographer via The Library of Congress

David S. Evans and Karen Winget, Harlan’s Globetrotters: The Story of An Eclipse

David S. Evans and J Derral Mulholland, Big and Bright: A History of the McDonald Observatory (1986)