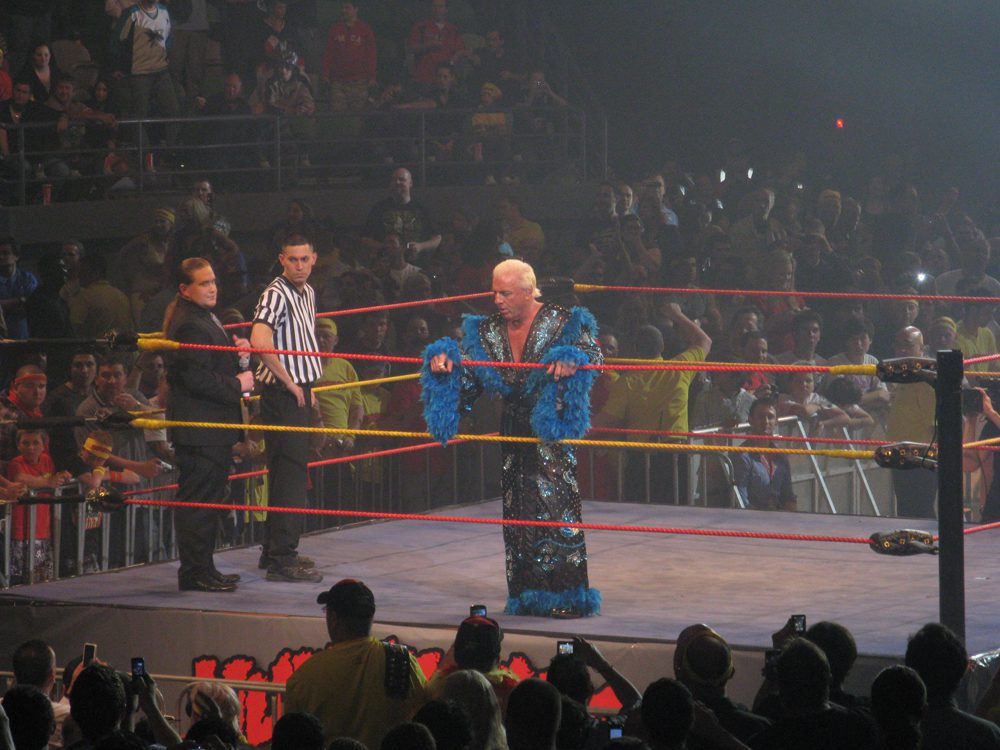 “Nature Boy” Ric Flair at the Hulkmania Tour in Melbourne, Australia in 2009 (via Wikimedia Commons)

Growing up, I enjoyed going over to my Uncle Glenn’s house on Saturdays. In the afternoons, he and my Uncle Jeff would tune trucks and fix lawn mowers, rototillers, and other machinery. I was too young to fix anything, but I wasn’t there to help my blue-collar uncles with these tasks. I came over to watch World Championship Wrestling’s Saturday Night. It was at my uncle’s house where I was introduced to the first “heel” I’d ever root for — “The Nature Boy” Ric Flair.

Flair’s personal life is the subject of ESPN’s newest 30 for 30 documentary, “Nature Boy,” directed by Rory Karpf. Flair, the consummate showman, lived the life he portrayed on television — a stylin’, profilin’, jet flyin’, kiss stealin’, wheelin’ n’ dealin’ son-of-a-gun. In the process, Flair captured the imaginations of wrestling fans around the nation. Yet, as “Nature Boy” shows, the pressures of living this life, which included heavy drinking and sexual promiscuity, weighed on Flair. “I always wanted to be The Man,” he says early in the film. “I could never live just being a man.” The result was a string of broken marriages and devastating alcoholism and depression.

Born in 1949, Flair, whose legal name is Richard Morgan Fliehr, was adopted. He fell in love with wrestling as a child, watching it on Saturday evenings. From a young age, Flair’s interests were not those he could share with his adoptive parents. In addition to loving wrestling, Flair was into sports. His parents, on the other hand, went to the theatre. Flair’s athletic prowess was on display as a high school athlete, ultimately landing him a spot on the University of Minnesota football team. But, the academic life wasn’t for Flair. He was always looking for more attention than hitting the books could’ve provided.

After leaving the University of Minnesota, Flair attended Verne Gagne’s wrestling camp. Here, Flair learned the basics of the art of wrestling. Gagne put his recruits through the wringer. As part of training, Flair recounts having to run up 21 flights of stairs, often carrying another wrestler on his back. Then, the pair would have to wheelbarrow up the stairs. These exercises helped recruits gain the physical and cardiovascular endurance to participate in the “fake” sport of wrestling. But, Gagne’s camp had other challenges. Even “hitting the ropes” involved endless practice. If done poorly, the ropes tore the skin off the wrestlers’ arms. On top of this, Flair and others had to learn how to fall on the mat. For the first six weeks of Gagne’s camp, Flair remembered how everything was black and blue. Flair had a knack for wrestling, something immediately apparent to everyone who saw him.. 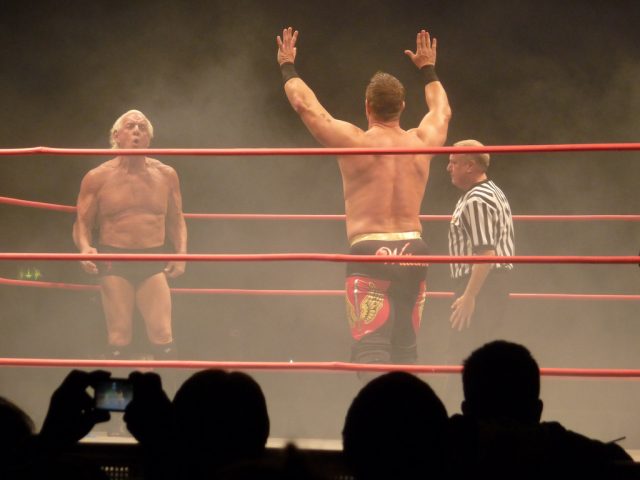 Everything was almost taken away from him when, on October 4, 1975, Flair’s life nearly ended in an airplane crash. Flair broke his back in three places; his spine was smashed together. Not being able to exercise caused Flair’s body to wither from 225 to 180 lbs. He had to start working out again if he wanted to wrestle. This experience helped Flair understand who he wanted to be as a wrestler. “When I crashed in the airplane,” Flair tells Karpf, he realized that he “wanted to be blonde and a bad guy.”

The way “Nature Boy” documents the process of inventing Ric Flair is one of the documentary’s strengths. Leslie Jacobs, Flair’s first wife, saw a noticeable change in her husband as he began to live his wrestling persona. Flair purchased the items he’d often mention in his promos. This included his own limousine and the elaborate robes that he’d wear on his way to the ring. He wasn’t shy about how much his Rolex watches or leather shoes cost. Consumerism became a key part of his wrestling and personal life. Flair’s wrestler self, according to Jacobs, “got bigger and bigger.” Wrestling, which experienced a boom in the 1980s, provided Flair the opportunity to do anything he wanted to do. Separating “The Nature Boy” from Richard Morgan Fliehr became essential for getting what he wanted out of life. “I lived my gimmick,” Flair admits.

Flair’s persona, not to mention his style of wrestling, was a natural fit in the National Wrestling Alliance (NWA) and Ted Turner’s World Championship Wrestling (WCW), both of which were marketed for blue-collared men (like my uncles) who wanted to see a fight. (What these companies presented contrasted sharply with the cartoonish gimmicks the World Wrestling Federation (now World Wrestling Entertainment) offered its young audience.) The different styles of wrestling meant that Flair could have intense — and violent — rivalries with some of the best wrestlers of the 1980s. This included longstanding feuds with Dusty Rhodes and Ricky “The Dragon” Steamboat, two of Flair’s favorite opponents. Flair’s association with NWA and WCW, though, limited him as a regional wrestler. Until he joined the WWF in the early 1990s, Flair’s fame remained restricted to parts of the South and the Midwest.

Instead of focusing on Flair’s in-ring career, “Nature Boy” spends considerable time on Flair’s weaknesses — sex and alcohol. In interviews with Karpf, Flair is open about his inability to be monogamous, claiming to have slept with as many as 10,000 women. Often, women and alcohol went hand-in-hand. Flair tells a story about how he visited a sports psychologist who asked him about his sex and drinking habits. In this confessional, Flair admitted to drinking at least 10 beers and 5 mixed drinks every day for nearly 20 years — from 1972 to 1989. During this span of time, Flair remained a functional alcoholic, showing up for his matches and remaining dedicated to the sport he loved. 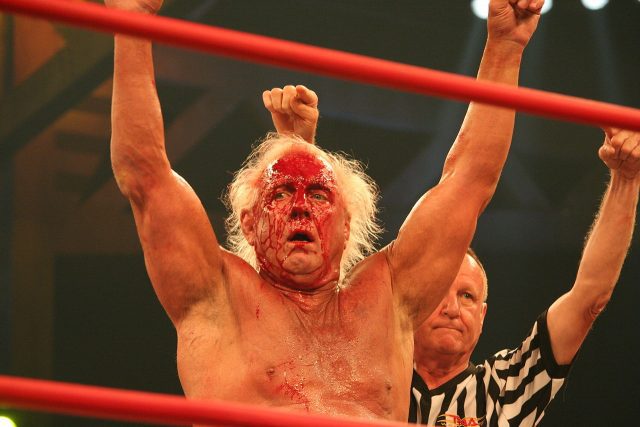 Wrestling couldn’t provide Flair with everything he wanted. Flair’s candid about how he was never home, pretty much neglecting his children from his first two marriages. In addition, Flair’s parents were not impressed by their son’s rabid consumerism. Flair recalls how excited he was to show his parents the $2 million house he bought. Instead of being impressed, they asked why anyone would need such luxuries in their life. Despite being one of the most recognizable faces in “sports entertainment,” Flair never received the recognition he wanted from his parents.

The most devastating part of “Nature Boy” deals with the death of Flair’s son, Reid. Reid, a successful amateur wrestler, idolized his father growing up, even mimicking his father’s famous “Woo!” in WCW promos in the late-1990s. Flair fostered Reid’s interest in professional wrestling, taking him to Japan to earn some money and gain in-ring experience. Although Flair was spending time with his son, he showed another weakness — his inability to be a father. Reid was masking his problems much in the same way his father had done — with alcohol and drugs. When Reid was trying out for the WWE, Flair was told by Paul Levesque (better known as Triple H) about his son’s drug habit. Yet, Flair, a “consummate liar,” according to Levesque, couldn’t face the truth and, on March 29, 2013, Reid died from a heroin overdose. In mourning, Flair drank. It was the “[o]nly way I could get away from it,” he says.

In “Nature Boy,” Karpf fully captures the ups-and-downs that have characterized Ric Flair’s life. It’s an emotional documentary that underscores how fragile the human experience can be. As a biographical account of Ric Flair, “Nature Boy” succeeds. Still, I found myself wanting more from a 90-minute film. There’s mention of Flair bouncing back-and-forth between WCW and WWE, but “Nature Boy” offers little regarding Flair’s status as a wrestler in the 1990s, a period where these two wrestling companies duked it out in their famed Monday Night Wars. In addition, there’s little about the homosociality of wrestlers. At one point in “Nature Boy,” Sting, a WCW icon, remembers, “I’ve never seen a guy with his pants pulled down more than Ric Flair.” With all the mention of “locker room talk” over the past fifteen months, “Nature Boy” never really answers the main question it raises: What is a man? Additional commentary on this point, including more pointed questions from Karpf to Flair about manhood and masculinity, would’ve made a good documentary even better.

Also by Christopher Babits on Not Even Past:

“Doing” History in the Modern U.S. Survey: Teaching With and Analyzing Academic Articles
Finding Hitler (in all the Wrong Places?)
The Rise of Liberal Religion by Matthew Hedstrom (2013)
Encountering America: Humanistic Psychology, Sixties Culture, and the Shaping of the Modern Self by Jessica Grogan (2012)
Another perspective on the Texas Textbook Controversy