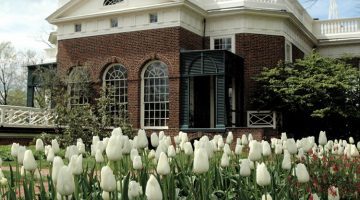 One rainy April morning in 2011, I requested Thomas Jefferson’s Qur’an from the Rare Book Room in the Library of Congress. Outside, tulips blazed in bright patches of red around the Capitol building. The flowers reminded me of their origins in the Ottoman Empire. The sultan had first sent them as diplomatic gifts to European rulers in the sixteenth century…And so it was that, through contact with Muslims long ago, this stunning flower had eventually reached North America, where it now reigns as a sign of spring.