To say that the US Civil War (1861-65) was tragic and destabilizing is a glaring understatement. 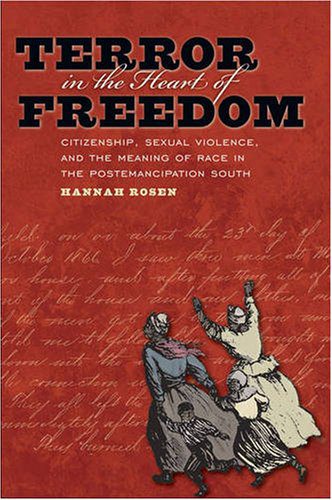 Hundreds of thousands died or were wounded in combat, entire cities were destroyed, and afterwards, the large segment of the nation that had seceded had to be reincorporated into the national body, and a new citizen-subject remained to be embraced by post-bellum societies. Hannah Rosen’s Terror in the Heart of Freedom analyzes the experiences of recently freed blacks, released from the bonds of slavery and plantation life, who sought to create new lives as freedmen and women. Many headed to cities as part of a “mass exodus from slavery.” The city of Memphis, Tennessee became one such “city of refuge” where freedpersons practiced their freshly conferred citizenship. They established new communities, built churches, opened their own schools, and formed African American benevolence societies that sponsored community events. In short, freedpersons in Reconstruction Memphis, as in many other cities, catalyzed changes in the socio-spatial boundaries of urban spaces that had previously been closed to them.

These changes did not come without tensions, which the continued occupation of southern cities by federal troops exacerbated. White society had also undergone transformations in the wake of the Civil War. In Memphis, working-class white immigrants filled a political vacuum left by the outmigration of the city’s antebellum commercial and political elite. These immigrants lived primarily in South Memphis, a region of the city that also happened to be a major destination for recently arriving freedpeople. Not only did the emerging white elites have to contend with a federal force that undermined their hegemony, they also encountered an expanding entrepreneurial and professional Black elite that they viewed as another threat to their political and economic ascendance. These tensions came to a head on Tuesday, May 1, 1866 in what is known as the Memphis Riot.

On this day, black Union soldiers that had been the primary federal force occupying Memphis turned in their weapons as part of their very public discharge. Because of the public nature of their de-armament, Rosen believes that the city police and white civilians chose this day to act. Over the course of three days, white rioters killed 48 African Americans, wounded 70 to 80, and set fire to 91 homes, four black churches, and 12 black schools. The rioters also raped several freedwomen. What started as a clash between black Union soldiers and Memphis police soon came to affect many more people and to symbolize much more. 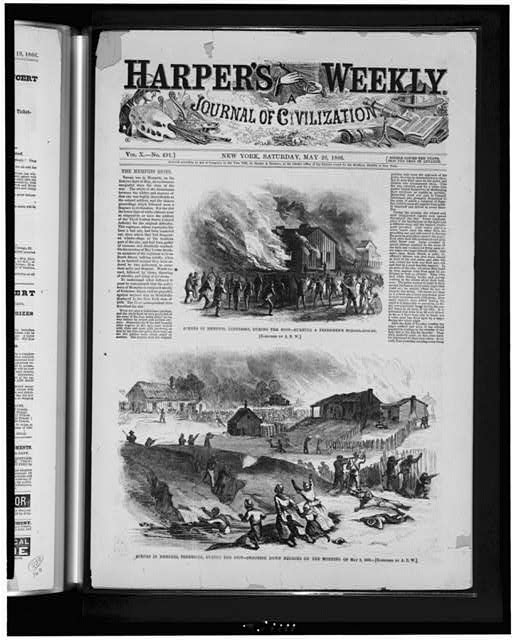 Recently, historians have found that the Memphis Riot was not entirely spontaneous, random, or anarchic. It was “well-orchestrated” and the assailants made a “clear political expression.” What historians have missed in previous studies, Rosen argues, is the symbolic weight of the sexual assaults that African American women suffered during the riot. In the wake of the riots, a series of Congressional hearings were convened in Memphis with the aim of clarifying what had happened in Memphis that May. Rosen goes back into the records of the congressional investigating committees that took freedpeople’s testimonies in Tennessee, the Carolinas, Georgia, Alabama, Mississippi, and Florida, as well as the records of the Bureau of Refugees, Freedmen, and Abandoned Lands to uncover the “coherent symbolic order” demonstrated in the riot. This order was the “nexus of racial and gendered meanings…performed and rearticulated through [rape].”

Why did freed people testify? Rosen’s close analysis of the meanings and discourses embedded in their testimony about the rapes suggests that for freedmen and women, testifying was an act intended to claim the right of all citizens “to live free of violence.” Freedom for formerly enslaved persons meant more than “to be free.” It also meant “to be a citizen,” which presupposed the same rights and protections for all citizens (in law and practice, however, citizen typically signified adult male). Women who described acts of rape had to “find the words to narrate and record” what they had witnessed or experienced. Many of the testimonies of freedwomen who the white rioters raped described the men as having acted very nonchalantly before the sexual assault. Rosen interprets this as stemming from a mentality that saw black women as occupying a position so low on the socio-sexual hierarchy that they simply did not have the choice to refuse a sexual act. Several women recalled having asserted their free status to no avail. Quite convincingly, Rosen contends that by ignoring freedwomen’s freedom claims “the assailants thereby asserted, through their words and gestures, that emancipation was of no significance and that black women continued to be different from white women…who were…protected from sexual exploitation by patriarchal family structures and the rights of citizens.”

White northerners viewed the Memphis Riot as evidence of the continued need to take a hardline in the reintegration of former Confederate states. One of the most polemical Reconstruction Acts, which set the terms for the reincorporation of the seceded states, was the 14t Amendment. Southern states debated the issue of universal citizenship rights and their extension to former slaves in a series of Constitutional Conventions. Rosen examines one such convention held in Little Rock, Arkansas, in January 1868 to uncover the meanings ascribed to masculinity and femininity that contributed to the “racist terror” that continued unabated from 1865 to 1876 even though Congress and the northern press publicized the riot and the testimonies of freedpeople.

What is so powerful about Rosen’s study is that it shows the hope that freedpersons had for their future, their trust that government institutions would protect their rights as citizens, and the mentalité that “impinged on their ability to claim their rights as citizens.” The subject matter is not light, but Rosen offers a study of the post-bellum period that helps us interpret the violence against African Americans that was to come and it proposes a way of “reading” rape that has relevance to studies of violence against women used as a political weapon, both past and present.