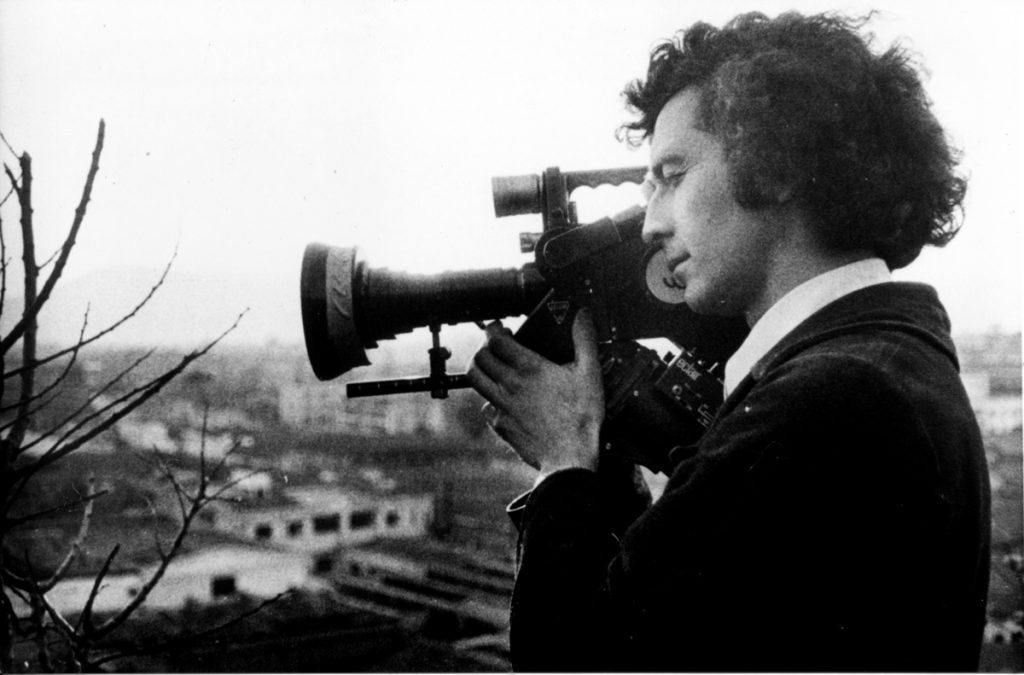 “Where is that terrible beauty we planted so long ago?”

Rodolfo Müller is almost a hundred years old, now.  He still lives in the same house as always, off Simón Bolivar, between Hamburgo and Coventry. That’s in Ñuñoa, a township on the near west side of Santiago.  It’s a big house, and very nice but unpretentious.  If he had wanted, he could have picked a more prestigious address further north, in Providencia, or up higher, in Las Condes.  But he didn’t.

Rodolfo was born in Germany in about 1920.  Before World War II, he came to Chile with his parents and his brother.  They were just teenagers.  I met him when he was almost sixty.  He still looked very German after all those years: tall, blond, and blue-eyed.  But he was a Jew.  That’s what people said, anyway. Maybe, just on his mother’s side.  They came to Chile to escape from Hitler.  They left in time and made new lives in South America.

Rodolfo was a violinist and a pretty good one, apparently.  Until he lost a segment of his little finger in an accident.  If it had been his right hand, it wouldn’t have mattered as much, not for the violin.  But it was the left.  Violinists use that a lot.  Rodolfo was a mechanic.  It was a work-related accident.  Machines are cold-hearted and unforgiving in that way.

He drove a ’64 Volvo.  It was old, even then, but it ran like a Swiss watch.  He did all the work on it personally.  Rodolfo was not the mechanic at the shop on the corner.  He was the ace; the mechanical surgeon.  A horse-tamer for steel and steam.  When big industrial contraptions at local factories broke down, they came and got Rodolfo.  He understood machines.

When he gave up the violin, Rodolfo started playing the accordion.  You can’t have music from Chiloé without an accordion.  Besides, after Beethoven’s quartets, the melodies from Chiloé were simple, comrade.  He played in a group was called Aydar.  His wife, Irma Silva, was the director.

Chiloé is an island in the south.  Potatoes, sheep, and seafood.  Theirs was a picturesque culture and they had a music all their own.  Aydar comes from the local vocabulary.  It’s a contraction of ayudar, to help.  Solidarity is fundamental for survival in a place like that.  It was primitive island communism. It’s just how it was.

Irma and Rodolfo were members of the Association of the Relatives of the Detained-Disappeared, (Agrupación de Familiares de Detenidos-Desaparecidos).  Aydar was not the official group of the Association.  There was one.  But this was Irma’s project, where Inelia sang and danced the cueca with Lucho from Lo Hermida.  It’s where I met Pepe and Alfredo, Victor and Jaqueline, Sonia and the unforgettable Miguel Marín.  I played guitar and sang backup vocals.  I could do harmony.  People liked that.  Everyone there had been hurt by the Pinochet regime in one way or another.  It was our protest group.  They couldn’t kill the joy.

Irma was a professional folklorist.  She even taught folklore at the University, before the coup.  After the coup, folklore was considered suspicious.  Too many leftists.

Irma and Rodolfo were the parents of Jorge Müller, the filmmaker.  He disappeared on November 29, 1974, along with his girlfriend, the actress and producer, Carmen Bueno.  Inelia’s boy, Tito, had been gone four months by then.  Miguel Angel, Doris Meniconi’s boy, just ten days.

Jorge Müller and Carmen Bueno were clandestine members of the Movement of the Revolutionary Left, also known as MIR.  Before the coup, they had worked for Chile Films. With director Patricio Guzmán, they made the documentary, La batalla de Chile –The Battle of Chile.  It was about the historical process in Salvador Allende’s Popular Unity government.  It was meant to be a memoir of the revolution, but it devolved into a denunciation of the coup.  Jorge was the cameraman.  The whole world can now see the coup unfolding through his eyes. 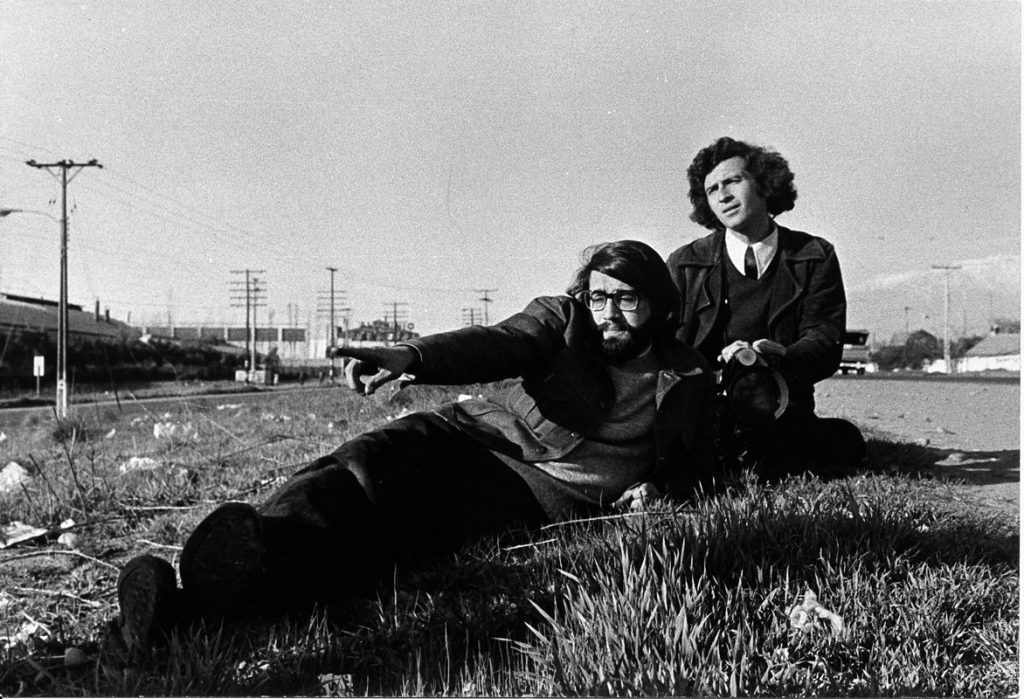 Now, if MIR wanted a documentary about the Popular Unity government, it wasn’t to come out in support of the idea that the ballot box was the right way to have a revolution, comrade.  MIR wasn’t a part of the Popular Unity coalition.  They believed in violent overthrow or nothing at all.  The theory was that if you tried to take over the means of production nicely, there will be a coup.  They were right about that.  But Chile Films was more than just MIR, and documentaries are more than just propaganda. In the long run, The Battle of Chile got out of control.  Now, it’s a classic.

The unedited footage was smuggled out after the coup.  That cost Jorge his life.  Irma was inconsolable.  She was a high society lady, deep down.  She liked things done properly, efficiently and on time. She joined the Association when Jorge disappeared.  Later, she created Aydar.

Folklore from Chiloé was raucous, sentimental, and fun.  Someone would speak briefly, at the beginning of our presentations, to say who we were and why we were there.  Then, it was strictly repertoire from Chiloé.  Some of the songs talked about lovers lost at sea, or travelers who never came home, but the listeners had to make the connection themselves.  It was a challenge to the regime, but an indirect one.  A clever one.

Among the mothers in the Association, Irma was one of the youngest.  She died of cancer in ’94.  Pinochet was no longer in power, but there was still no news of Jorge.  Rodolfo was left alone.  A grandson went to live with him.  And there are many friends from the old days.  He hasn’t been forgotten.  His son was an artist.  One of the best Chile has ever known.  But there can be no poets in Plato’s Republic, comrade.  As it turns out, the real battle of Chile was one that we would lose.  The whole project of a world that is fair, just, and free has collapsed. 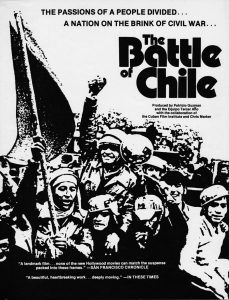 The Battle of Chile movie poster (via Patricio Guzmán)

They started filming in May of ’72.  The tale had begun, but no one knew how it would end.  Víctor Jara had a song about that, from before.  After the coup, Santiago del Nuevo Extremo gave us the verse, where is that terrible beauty we planted, so long ago?  Nostalgia, comrade.

The revolution failed, but the film is still a treasure.  It has its rightful place today in the shantytowns of poor Chilean youth, the ones who never knew that once there had been a dream.

Irma and Rodolfo had a house on the coast, at El Quisco.  That was a beautiful beach and, in its heyday, pretty elegant.  Now, it has sort of come down in the world.  People with money don’t go there anymore.  They prefer Algarrobo, Papudo and Zapallar.  Not because the beaches are any better, only because the crowd is more exclusive.

Irma and Rodolfo’s house was up on a cliff, right near the shore.  It was a wooden house, red and white, with a huge pine tree in the front.  The beach was about five hundred feet away, but to get there, you had to take the stairs.  It was about two-hundred feet down.  Which was why the view from the back porch was so spectacular.  There was a well that never went dry.  In a coastal town with a chronic water shortage, Irma and Rodolfo’s house was the oasis.

Deep down, Jorge liked the good life.  Given a choice between a political demonstration downtown and a day at the beach with his friends, he preferred the day at the beach.  El Quisco was his beach.  I bought that house in 1987.  Irma and Rodolfo sold it because they needed the money and because they weren’t going very often anymore.  It was hard, because it was Jorge’s house, too.  It was as if his footsteps could still be heard there.  As if his heart were still beating there.  Something about the smell.  When I went, which was quite often, it was as if I dreamed his dreams and saw his visions.  Irma and Rodolfo wanted the house to stay in the family.  It was a simple place, but enchanting.

Aydar performed from ’76 until ’88, more or less.  Those were glorious years, tragic and triumphant.  Irma and Rodolfo had another child, a daughter, but Jorge was their pride and joy.  And they were right to be proud.  Repressive government doesn’t work out when people can see the truth.

The DINA took Jorge Müller and Carmen Bueno at 9:30 am on the corner of Bilbao and Los Leones.  They had been to a party with the cast and crew of another film that had opened the night before at Cine Las Condes.  They were on their way to work at Chile Films, but they never made it there.  Agents appeared in civilian clothing, driving a grey Chevrolet pick-up.  We have seen them before.  They tried to rip out the people’s eyes and ears, comrade, but we still have the film.  That’s not ever going away.

Perhaps, Jorge and Carmen died believing that victory was imminent. That’s what MIR had taught them.  Song, poetry and cinema are more powerful than bombs and bullets.  Maybe they are, but sometimes, they are not powerful enough.

For more on Chile’s disappeared ones, see www.memoriaviva.com.

La Batalla de Chile is available on Youtube, linked here is part one of four.

Nathan Stone is a new graduate student in Latin American History.  He lived in Chile for many years, starting in 1979.