The Old Main Building (pictured below) was the first structure to house the physics department on UT’s campus. The department would eventually move to the Painter Building and the RL Moore Building, where it stands today. 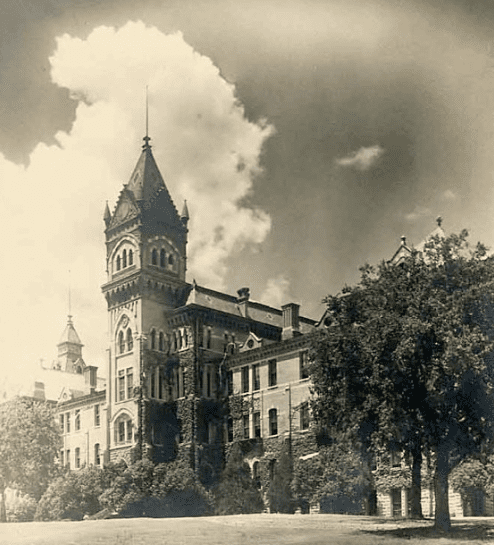 An image of the department’s earliest demo equipment. A Wimshurst state electricity generator, an electric egg (for discharges in rarefied vapors), four Leiden jars, and a Bohnenberger electroscope sit on the top shelf, while the bottom shelf holds a thermoelectric generator. The magnetic dip needle (in the third bay) and the two wave machines sitting on the lower half of the end cabinet are still in use today. 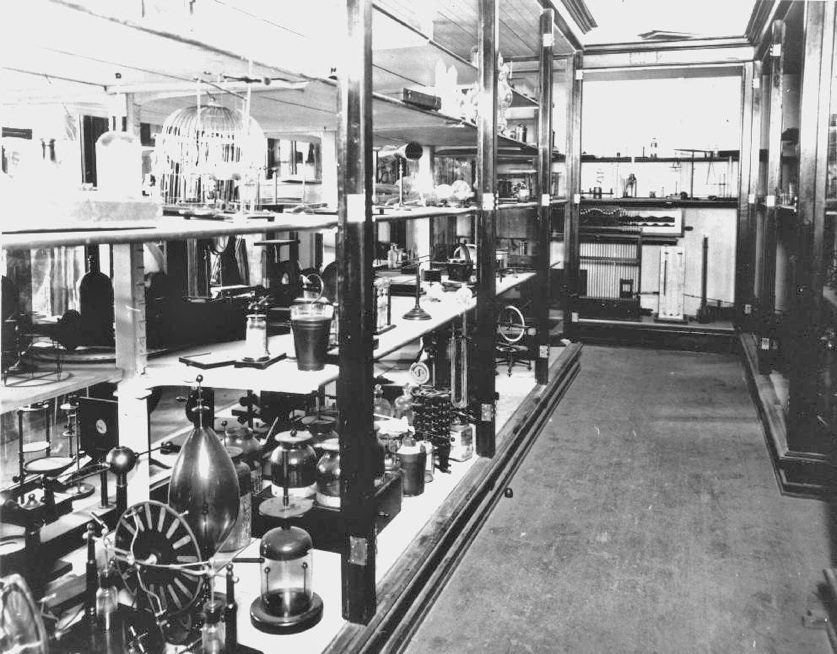 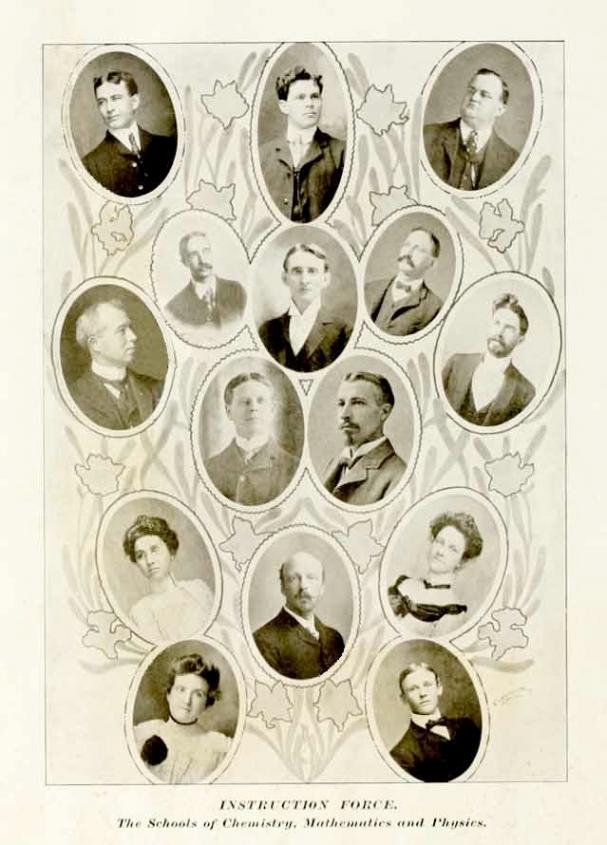 This student group shot, taken in 1900, features the department’s first Master of Arts and Master of Science candidates. 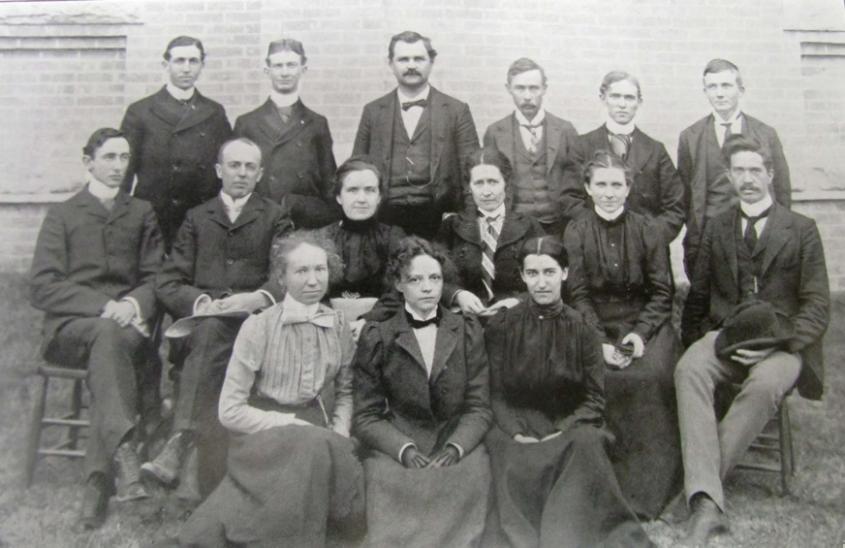 One section of the site is dedicated to the department’s many academic award recipients. The department is home to two Nobel Prize recipients: Ilya Prigogine and Steven Weinberg. Ilya Prigogine, a Moscow native whose family fled to Belgium after the Russian Revolution, won the Nobel Prize in chemistry in 1977 for his contributions to non-equilibrium thermodynamics, particularly the theory of dissipative structures. Steven Weinberg won the Nobel Prize in Physics shortly after Prigogine, in 1979, for his work on the theory of the unified weak and electromagnetic interaction between elementary particles, including, inter alia, the prediction of the weak neutral current. Weinberg shared the award with Sheldon Lee Glashow and Abdus Salam, and joined UT’s physics and astronomy department in 1982. Other notable award recipients in the department include: John A. Wheeler, winner of the Enrico Fermi Award in 1968; Marshall N. Rosenbluth, winner of the National Medal of Science; and Cecile DeWitte-Morette, winner of the  American Society of the French Legion of Honor 2007 Medal for Distinguished Achievement in 1997. 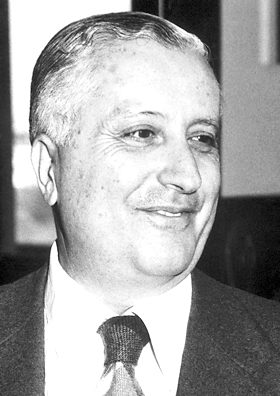 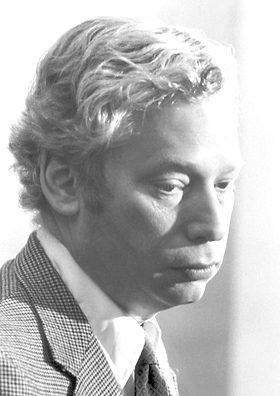 Women played an indelible role in the UT Physics department’s growth and success. Female physics professors and students alike provided invaluable departmental support through their service as scholars, instructors, and laboratory assistants. They produced superb scientific scholarship that helped the University of Texas become one of the top scientific research institutes in the county.

Lulu M. Bailey was the first professional female physicist to walk the halls of the UT physics department. She enrolled at the university as an undergraduate student in physics in 1892 and quickly rose to become the department’s first female Assistant in Physics in 1899. She worked alongside J.M. Kuehne, a Fellow in Physics in the department. Kuehne earned a yearly salary of $500, while Bailey earned $350. Bailey became an official Instructor in 1914, a promotion that increased her annual salary to $1500. However, for reasons not explained on the site, Bailey did not receive a pay increase after being appointed acting Assistant Dean of Women Students in 1916.

Female graduate students, like female instructors, did much to bolster the department’s reputation during its early years as an academic institution. Emma Townsend was the first female UT alumna to receive a doctoral degree in physics. She began her career as a masters student in UT’s physics department back when the department did not confer doctoral degrees. She graduated from the university  in 1924 after writing a master’s thesis entitled “A Study of Residual Inductances of Resistance Coils.” She continued her studies at the University of Chicago before finishing her PhD at Columbia University in 1930. The first woman to receive a University of Texas doctoral degree in physics was Janice Sears Bloom Fain, who received a PhD in Physics in 1956 for a dissertation entitled “Complete [pi]-electron Treatment of the Butadiene Molecule and Ion.” 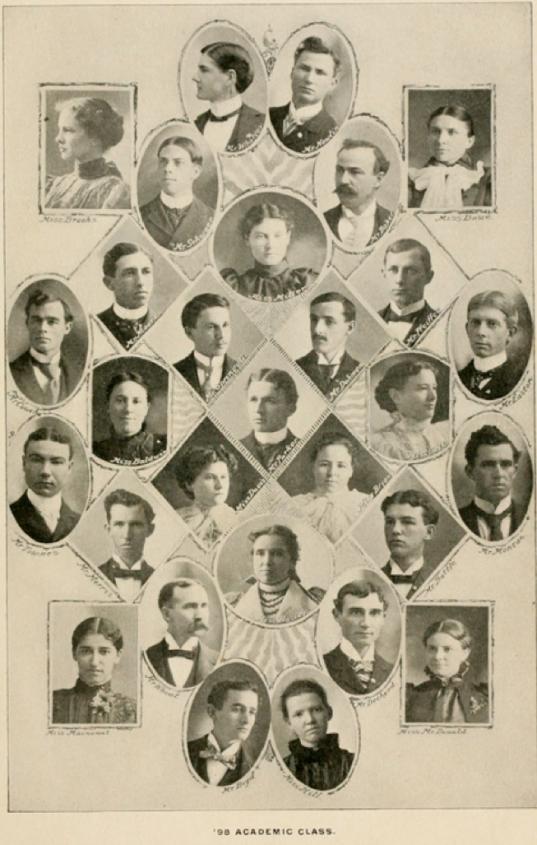 One of the more notable alumni was Sister Michael Edward O’Byrne, an active nun who earned an MA in 1926 with  a thesis entitled “An experimental test of the reciprocity law in photography over a wide range of continuous and intermittent exposures.” She continued her studies at the Catholic University of America, where she wrote a dissertation entitled “Combination frequencies and infra-red absorption spectra of certain alkaloids.” The work was published in the The Journal of the Optical Society of America in 1933 and earned her a doctoral degree in 1932. 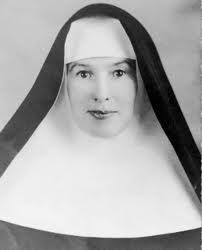 She became the head of the science department at Incarnate Word College in San Antonio, TX, and helped the school raise $500,000 for a new science building. Francis Cardinal Spellman of New York dedicated the three-story structure to Sister Michael Edwards O’Byrne in December 1950.

Learn more about the physics department’s fascinating history by visiting the website on which this article is based.

All photos courtesy of the University of Texas at Austin Physics Department History.