During the summer of 2005 I embarked on my first research trip. I had recently taken a class on oral history methodology and was eager to put my newly acquired skills to use. My research focuses on a tumultuous time in the history of the Indian subcontinent: the 1947 events that gave India its independence and created the new state of Pakistan. My own family hails from Aligarh, a city about 90 miles southeast of New Delhi and, as Muslims, opted to move to Pakistan. I was aware of this as a child, but because I grew up outside Pakistan, it was not until I began my research and had enough comfort speaking Urdu that I persuaded some of my elderly relatives to tell me their stories of the time of independence and partition. 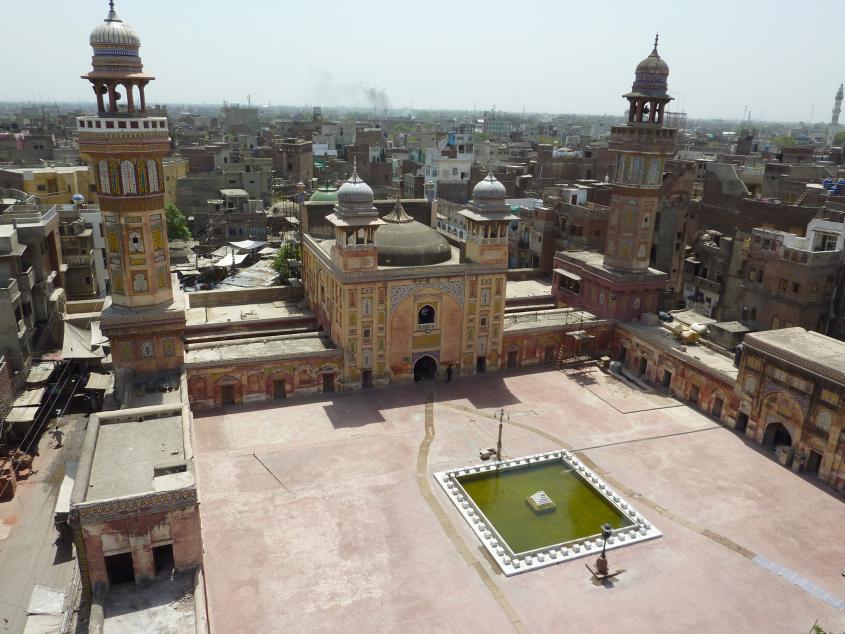 Lahore’s old city from the minaret of the Wazir Khan Mosque. Photo by Aaron Jakes.

Mrs. Zahra Haider was married to my grandmother’s cousin, Khurshid Haider. I have known her my whole life, but it is only in the last few years that I have become close with her and her family. She was born in Dehra Dun. Her father’s name was Yaqoob Shah and her mother’s Zohra Shah. She was raised in Lahore by her Aunt because her mother was unwell. Her father was the Auditor General of Pakistan. He was posted for two years in Washington as Pakistan’s representative to the World Bank, and took his family along with him. She married Khurshid Haider, who died a few years before this interview. Currently she lives in Rawalpindi Pakistan with her son Mohsin and his family.

I interviewed Mrs. Haider at her sister’s home in Lahore, Pakistan. As it was June, and very hot, we sat in a room with the air-conditioning running. The hum is audible on the recording. Throughout the interview, Mrs. Haider’s sister, kept coming in to offer us food or fruit.

She speaks here about her experiences during the 1947 partition, an event that played out violently on the streets of Lahore. Mrs. Haider remembershaving her daily routine disrupted by partition’s displacements. Although she briefly mentions the bureaucratic imperatives of partition, she is mostly focused on personal experiences. It was unbearably hot as they prepared for their exams that summer; in August, many of her friends moved away; the school tuition bills had to be paid; she was scolded by a doctor in a refugee hospital for seeking a few moments of normalcy with her friends; she took clothing from her mother’s laundry to give to the refugees. This focus on the everyday helps us, as historians, to understand the experience of women and youth during partition.

Mrs. Haider’s memories come in snippets that take on comprehensive significance and are influenced by the national history of Pakistan. She speaks of conflicts with Hindus yet, it is the loss of her Hindu friends that she feels most sharply. And the innocence of her surprise at their departure is still evident in her voice. As her story concludes, she refers to a woman who died from her wounds after doctors’ heroic attempts to save her. When she died, her baby daughter became an orphan. Though the story is not included here, one of Mrs. Haider’s friends took that baby home and today, she is practically an older sister of Mrs. Haider’s daughter-in-law, Neely, the daughter of that friend who long ago carried a baby home from the refugee hospital.

Zahra Haider’s story gives a glimpse of Lahore, a primary site of partition’s violent upheavals. She shows us that partition’s disruptions were both massive and mundane. Stories like Mrs. Haider’s bring partition down to ground-level where we can see, hear and feel what partition was like for one young girl trying to make sense of the world around her.