History is full of dying, but before this book was published historians rarely concerned themselves with how a society thinks about death. We have lists upon lists of casualty counts in all manners of battles throughout the ages but we have little understanding of the ways the idea of death has changed over time. 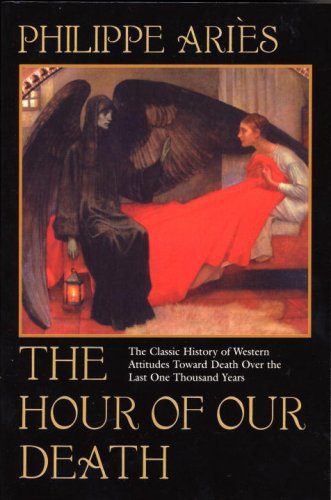 Philippe Ariès’ monumental work, The Hour of Our Death, was something of an exception, as it offers rare insight into European representations of death from the eleventh century to the twentieth.  Beautifully written and admirably translated, the work takes the reader through a dizzying array of cemeteries, epic poems, and deathbeds to provide a view of the ever-evolving place of death in European society. After reading it, one will never look at death the same way again.

The book rests on the Jungian concept of the collective unconscious, which means that Aries is attempting to find similar artifacts across a range of sources and regions that show the “unconscious expression of the sensibility of the Age.” In order to do so, he follows three themes through one thousand years: individual versus collective memorials, ideas of transitions between life and death (or “tame” death versus “wild” death), and the physical proximity between the dead and the living. The result is an eloquent description that conveys the mutability of western attitudes toward death.

And yet, Ariès anchors his continually evolving coffins with commonalities. For example,  “the idea of sleep is the most ancient, the most popular, and the most constant image of the beyond.” Death as sleep, as a neutral state of repose, uninterrupted calm and peace, is a belief that survived despite the best efforts of the Catholic Church, which sought to persuade society of the soul’s mobility after death. But Ariès finds recumbent figures in literature and statuary from the eleventh to the seventeenth centuries to document the persistence of the idea of death as sleep. Likewise, Ariès finds the monuments themselves, from the Mediterranean to England and from Spain to Germany as having a “genetic unity of forms,” which suggest an ongoing tension between the Christian liturgy and an older, pan-European idea of death as the big slumber.

The second half of the book concentrates on a different tension when Ariès presents a dramatic break in attitudes toward death with the advent of the twentieth century hospital death. For Ariès, the modern hospital death is an “absolutely new type of dying” because, quite simply, people lost control over their own deaths. For thousands of years death was a moment that could be foreseen by the soon-to-be deceased, and considered best spent in the company of friends and family, who were to provide a serene point of departure while the dying person gave orders and advice. In the modern era, Ariès argues, it became a moment of machines and professionals who kept the dying in ignorance of their condition, in sterile rooms far from the public’s attention. This loss of mastery to Ariès meant that death became a moment of diminished consequence. In the past, each death was a critical event in an ongoing, communal, struggle against evil spirits where each person’s salvation was a social project. Now, in a society striving to avoid it, death has become a hollow, empty affair. Ultimately, Ariès’ book makes a case against the modern hospital death. For him, writing in 1977, dying had been increasingly marginalized in proportion to society’s loss of faith.

A pioneering work on the study of death when it was first published; Ariès’ book remains an important read today because it was at the forefront of the natural death movement. His condemnation of contemporary practices pushed social activists to develop more humane practices and historians to think about death as an important subject, with its own questions of rights and social justice. Anyone curious about the evolving conceptions of dying would do well to start at The Hour of Our Death.