Muhammad Ali did not simply choose to be a cultural icon. He was also chosen. Elevated by unsurpassed boxing skills and athletic prowess to become heavyweight champion of the world, Ali transcended sports through radical political activism that has, with the passage of time, been largely smoothed of its rough edges. He broke the mold introducing a new brand of masculinity, more humorous and more vulnerable than anything the world had seen before.

Political friendships with Malcolm X and membership in the Nation of Islam announced the newly crowned boxing champ as a provocateur, one whose Cheshire cat smirk hid rivers of simmering anger, pain and barely contained rage. For a time boxing offered an outlet to the rage Ali felt about the unceasing racial humiliations of Jim Crow and the violence meted out against civil rights demonstrators across the country. 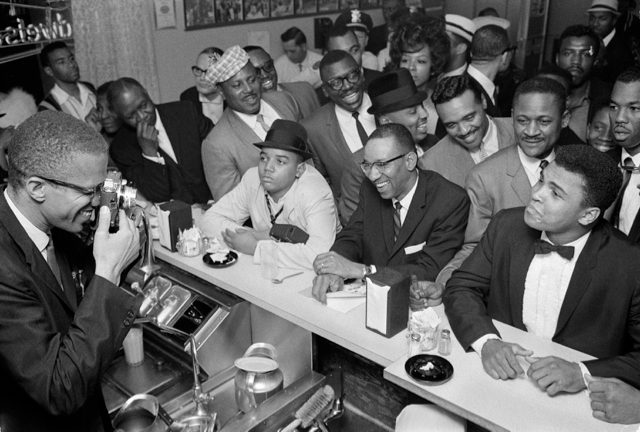 Malcolm X photographs Ali in February 1964, after his first defeat of Sonny Liston to become world heavyweight champion. Via Wikipedia.

But by 1967 Ali had seen enough. The most visible Nation of Islam member in the aftermath of Malcolm X’s 1965 assassination, Ali’s resistance to the draft and friendship with civil rights leader Stokely Carmichael made him perhaps the most visible Black Power activist of his generation. In doing so, Ali bridged the worlds between sports, popular culture, politics and activism in unimaginably profound ways. While contemporaries such as Cleveland Browns running back Jim Brown and Boston Celtics star Bill Russell were outspoken civil rights activists, none matched Ali’s youth, charisma and global appeal.

Accounts of Ali’s political courage during the 1960s tend to play up his anti-war exploits at the expense of his Black Power activism. In truth, the Black Power organization offered the earliest and most sustained resistance against the Vietnam War. Black Power activists made anti-war protests a core element of their political program, with a diverse range of groups including the Black Panthers staunchly opposing America’s involvement in Vietnam and efforts by the U.S. military to ratchet up the number of African Americans fighting on the front lines. 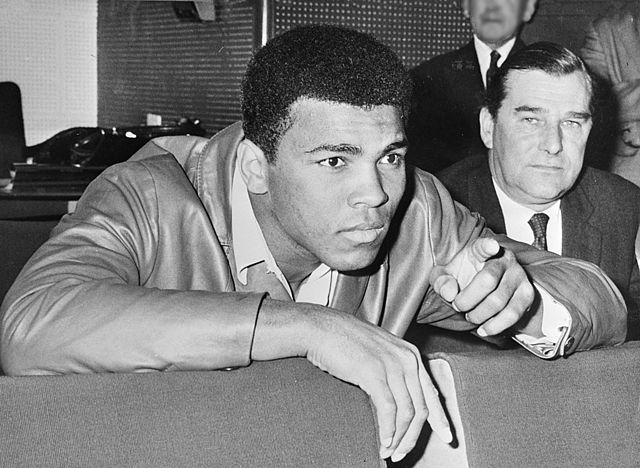 Ali’s now legendary statement that “no Viet Cong ever called me a n——” took place against a historical and political landscape that framed American foreign policy in Southeast Asia as a part of imperial wars of aggression against nonwhite peoples of the world. The sound bite remains a revolutionary act of political defiance precisely because Ali distilled lessons taught by Black Power revolutionaries with an economy of language that was the Nation of Islam’s and Malcolm X’s credo — make it plain.

Throughout the late 1960s Ali became a cultural touchstone for black America. He dazzled militant students with lectures on black history, his own political travails, and the need for principled resistance. An entire generation of black athletes, most notably Olympic sprinters John Carlos and Tommie Smith, and Kareem Abdul-Jabbar worshipped Ali as the pinnacle of athletic achievement.

As time passed, Ali helped make Black Power into a global political brand. His love for Africa, rage against political inequality and thirst for social justice made him a human rights ambassador. Ali’s public persona, while lacking the sharp edges of others, outraged America’s politicians and pundits, who branded him a traitor. For many whites, Ali’s political alliance with black radicals made him a frightening role model for restless youths with a penchant for mayhem that could be seen in urban riots cascading across the country.

Ali’s reclamation of his boxing title in 1974 coincided with a transformed American landscape. The man hadn’t changed, but the times had, recognizing his political defiance to participate in a now unpopular war as the principled choice of a true maverick. By the 1990s America embraced the once dangerous and reviled anti-war protester as a national treasure, one whose gait and sharp tongue had been considerably slowed by Parkinson’s disease.

Lost in neoliberalism’s warm embrace of Ali’s image via global marketing and branding deals is how this universally recognized icon for human rights found his political métier in the maelstrom of the Black Power era. Just as contemporary Black Lives Matter activists have identified the criminal justice system as a gateway to racial oppression, Ali and his Black Power generation marked the Vietnam War as a multifaceted nightmare that linked race, war and poverty in ways that impacted not just America, but the world.

This post was originally published in the Austin American Statesman on June 8th, 2016.