James Mann provides a lively and comprehensive study of the advisers who would guide George W. Bush as he sought to make the world safer for U.S. interests.  Mann argues that Bush’s inexperience led him to rely on—as well as greatly empower—a cohort including some of the most experienced and respected members of the conservative foreign policy making community.  This cohort—Cheney, Rumsfeld, Powell, Wolfowitz, Armitage, and Rice—came up in the ranks together, devoting much thought to altering the means and ends of U.S. foreign policy in order to avoid what they considered to be the errors of previous liberal and conservative administrations.  The Bush administration’s abandonment of realpolitik and judicious use of force, to embrace of ambitious unilateralism and export of U.S. institutions, was thus not as sudden or unprecedented as many contemporary observers suggested.  Such a new way forward had been brewing for decades. 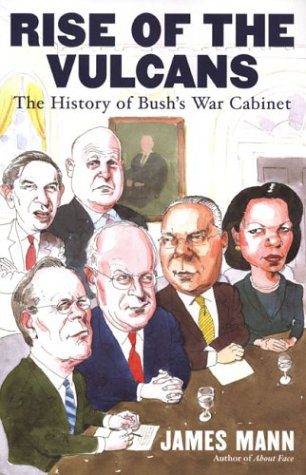 As a journalist, Mr. Mann performs his role of “providing the first draft of history” admirably.  Professional historians will appreciate his effort to position Bush’s “Vulcans”—the nickname his advisors used to convey their devotion to toughness and power—as the intellectual fulcrum between U.S. Cold War and post-Cold War conceptions of foreign relations.  The more casual reader will also appreciate Mann’s ability to make these policymakers come alive as human beings who, like anyone, consist of a lifetime of personal dreams, disappointments, goals, and agendas.  Indeed, as historians are becoming increasingly aware, men and women who toil on a specific problem or issue for decades often come to exercise far more influence on national policy than the given president who simply does not have the time to master every foreign policy question.