In October 2011, I was invited to the White House Forum on American Latino Heritage, a gathering of historians, and labor and political leaders in our nation’s capital. The day-long forum featured a roster of distinguished speakers, including President Barack Obama, Secretary of the Interior Ken Salazar, Secretary of Labor Hilda Solis and Medal of Honor recipient Sergeant First Class Leroy Petry. 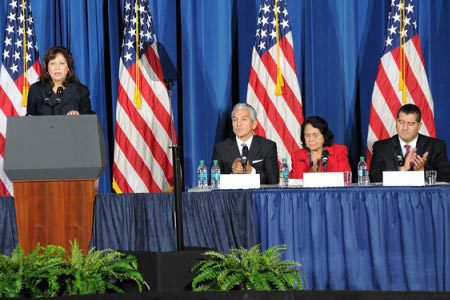 Labor Secretary Hilda Solis moderates a discussion on recognizing the contributions of American Latinos in the American economy with panelists Javier Palomarez, Dolores Huerta and Martin Cabrera. Tami A. Heilemann-Office of Communications

In the afternoon, we met in breakout sessions to identify sites important to Latina/o histories. According to Department of the Interior officials, only 4% of sites included in the National Register of Historic Places commemorate the histories of American women and people of color. Interior officials shared with us materials relating to the recent addition of the United Farm Workers California campus to the National Register of Historic Places to commemorate the life and work of Cesar Chávez.

Participants provided guidance for future sites to add to the register. My own recommendations included the site of the San Antonio pecan-shellers’ strike led by Emma Tenayuca in 1938. Labor organizing was important in the years after the Great Depression as industries worked to recover and unions sought to maintain the gains of previous decades. The strikers, primarily Mexican American women, had mixed success. When the federal government passed a minimum wage law of 25 cents an hour, the workers succeeded in getting the National Labor Relations Board to refuse the shelling companies’ requests for an exemption from the minimum wage. The shelling companies fought back by mechanizing shelling, costing the majority of workers their jobs, but those who stayed in pecan-shelling earned twenty-five cents an hour to run the new machines. I also recommended Holy Cross Catholic Church in Dallas, an African American parish that declared itself Sanctuary for Central American refugees in 1983, which I learned about from UT Department of History graduate student, Claudia Rueda. Holy Cross joined this national interfaith movement to protest U.S. policy in Central America by supporting those whose lives were devastated by the civil wars dividing Nicaragua, El Salvador and Guatemala. It was the only Catholic parish in Texas to declare Sanctuary and provides a rich example of interracial collaboration often overlooked in U.S. history.

The highlight of the day for me was the closing speaker, Supreme Court Justice Sonia Sotomayor. In her brief remarks, Justice Sotomayor noted that her mother had been a member of the Army Women’s Auxiliary Corp (WACs) during World War II. When I had a chance to greet Justice Sotomayor after her talk and I told her one of my students was studying Latina WACs, Sotomayor’s face lit up.  “She should interview my mother!” It was a pleasure to meet the Justice and to see her commitment to Latina history, which of course she has shaped in the twenty-first century.  The White House Forum was a fascinating opportunity to see how U.S. history is viewed by the federal government, and to assist in guiding it toward the many untold stories we historians are uncovering on a daily basis.

Official photos of the White House Forum on Latino Heritage