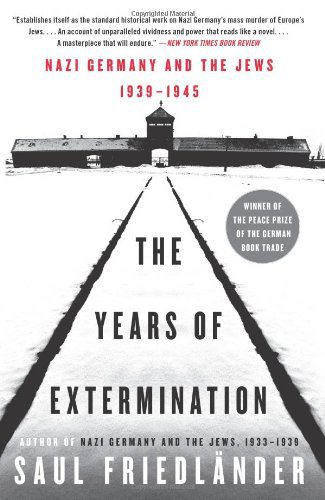 Saul Friedländer’s Pulitzer Prize winning book, The Years of Extermination: Nazi Germany and the Jews, 1939-1945, argues that the Holocaust must be understood as a European event. Without murderous German anti-semitism and racism, the Holocaust would certainly not have happened, but German policies could not have been put into practice on such a previously unimaginable scale without the acquiescence, support, even active participation of a wide range of historical actors in all of the occupied countries.

Friedländer shows that “the events we call the Holocaust” cannot properly be understood as the step-by-step implementation of a preconceived plan. Certainly, Hitler was unwavering in his belief that the Jews were Germany’s most dangerous enemy and that they must be eliminated completely, first from German, then from European life. Yet what the “Final Solution of the Jewish Problem” actually meant was neither clear nor consistent, even in the minds of Nazi leaders, until the invasion of the Soviet Union in 1941.  As late as the autumn of that year, it was still possible to imagine other (incredibly brutal but less systematically murderous) options, such as the mass deportation of Jews to northern Russia after the Soviet Union had been conquered. Yet the Nazi decision for genocide was not simply a response to the failure to defeat the “Jewish-Bolshevik” enemy in Russia. Friedländer argues that Nazi policies in occupied Poland between September 1939 and 1941 had already made genocide both thinkable and possible: “the ongoing violence in occupied Poland created a blurred area of murderous permissiveness that, unplanned as it was, would facilitate the transition to more systematic murder policies.”

However, it was the attitudes and behavior of Europeans in the occupied countries that permitted the Nazi fantasy of genocide to become a murderous reality. Many Europeans played active roles in the machinery of mass murder; the local governmental authorities in the occupied European countries who implemented the German racial laws, the local police forces who helped round up Jews for deportation to the death camps, the Eastern Europeans who functioned as guards in those camps, the ordinary Europeans who enriched themselves with Jewish property. Others simply remained silent, above all the political and religious elites. Some Europeans did resist. In Belgium, for example, resistance organizations worked with the  Jewish underground to hide about 25,000 Jews. Nor did all the Jewish victims continue to follow German orders in the hope of surviving until the end of the war. In the eastern European ghettos, some Jews engaged in armed revolts. But the bitter irony of these courageous acts of Jewish resistance, such as the April 1943 Warsaw ghetto uprising, was that they convinced Himmler and Hitler to move even faster with the annihilation of European Jews so that Nazi Germany would not have to deal with more Jewish revolts.

Friedländer draws extensively from diaries written by Jews across Europe during the war. Their voices help to make this a powerful book. It deserves to be read by anyone interested in the Holocaust.

Related stories on Not Even Past:
The Normandy Scholar Program on World War II
Review of Sarah’s Key, by Tatiana de Rosnay
Review of The Shop on Main Street, directed by Ján Kadár and Elmar Klos
David Crew on Photographs from Jewish Ghettos during WWII