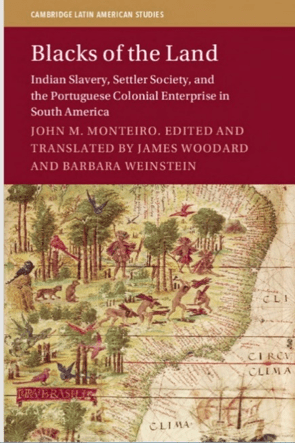 In the sixteenth and seventeenth centuries, nobody questioned enslaving Amerindians. In Blacks of the Land (originally published in 1994 as Negros da Terra) Monteiro studies Amerindian slavery in the Capitania de São Vicente, now known as São Paulo, and thus sheds light on practices and debates that took place all over the continent. What happened in São Paulo happened in Panuco, Hispaniola, Darien, Tierra Firme, Chile, Massachusetts, Georgia; in short, everywhere.

Monteiro traces slavery back to a widespread Amerindian institution. In coastal Brazil, the Portuguese found a linguistically unified indigenous world, yet one deeply ethnically fragmented. Indigenous societies built sharp corporate identities through raiding and counter-raiding. The Tupi did not incorporate captured rivals into households but dispatched them in rituals of cannibal consumption. The Portuguese used these practices to justify colonization and to build a native labor force.

The Portuguese ransomed captives from the Tupi for axes, scissors, and glass beads.  Those “rescued” through trade became slaves.  The use of the word rescate (rescue and commercial transaction) for ransom implied that it was better to be a slave in a Christian household than a morsel of a demonic cannibal. Purchasing slaves through native intermediaries was not the only strategy to get cheap labor. Slavers would get licenses to wage war on communities when the latter reportedly engaged in “unnatural” practices.

“Portuguese” raids (that involved hundreds and often thousands of indigenous allies), in turn, would lead the natives to counter-raid the Portuguese who would, in turn, gain new legal justification to wage war. This complex dynamic of just war and rescate did nothing but expand the institution of indigenous slavery in the Americas manyfold. It also imbued ideologies of indigenous captivity with deep religious, theological overtones.

Everywhere the Europeans went in the Americas, slavery flourished. To the theologically mindful, however, it soon became clear that Amerindian captivity was not the preferred route to indigenous conversion but a naked attempt at exploiting indigenous labor in mines, ranches, ports, and households.  As in many other places in the Americas, the religious in Brazil began to call into question indigenous slavery. By the mid-sixteenth century in Sao Paulo, the Jesuits became adamant opponents of the Paulistas (settlers of Portuguese and indigenous decent).

The Jesuits created “aldeas” (towns) where captives were catechized. Aldeas, however, also became rotational pools of wage laborers for Paulistas, not slaves.   The debate between Paulistas and Jesuits was over whether Indian captives were pliable-for-hire-Christian laborers or commodities whose bodies could be transacted at will and whose status would be inheritable. No one questioned just war or rescate as the preferred way to get converts or slaves.

Monteiro shows that in 1570 the crown introduced legislation to regulate indigenous slavery. Settlers had to justify raids and obtain licenses. The new legislation left paperwork, as raiders had to produce formal declarations of just war to proceed. Occasionally raiders would appeal to the Inquisition to cover their raids into the interior as expeditions to go after alleged heretics. Raiders would also often present their expeditions as mining prospecting.

As parties had to justify the legality of their raids, classifications of natives came in handy.  Legal hurdles encouraged the science of ethnology. Monteiro describes how settlers and Jesuits created ever more involved taxonomies, separating agriculturalists from nomadic savages, first on the coast (Tupis vs Tapuia) and later in the interior (Guairá vs. Goiá, Guaikurú, Carijó, Caeté, Tememinó, Kayapó). Slavers clearly preferred Tupi and Guairá whose agriculturalism prepared them to be slaves on wheat growing ranches. Getting Tupi-Guaranies, however, became increasingly difficult as the Jesuits armed the Guarani with guns in their Paraguayan missions.

After 1596, the crown sided with the Jesuits who became default legal wardens of all new captives ransomed through trade or rounded up via punishing raids.  Settlers, however, continued to keep the ransomed and the raided as “pieces.” Settlers would use wills to distribute Indians as property but would be careful not to leave notarial records of sales since these records could induce legal challenges and freedom suits.  Dowries and inventories, however, still registered Amerindians in household and ranches as transferable property.

The debate between Jesuits and settlers persisted over the entire seventeenth century. In 1639, Jesuits had the Pope reissued the bull of 1537, a brief originally issued to abolish Amerindian slavery in Mexico and the Caribbean. The Jesuits also sought to reduce the power of landed elites by taking them to court and by setting up their own mills to bankrupt their rivals. Finally, in 1649, Paulistas expelled the Jesuits from the province 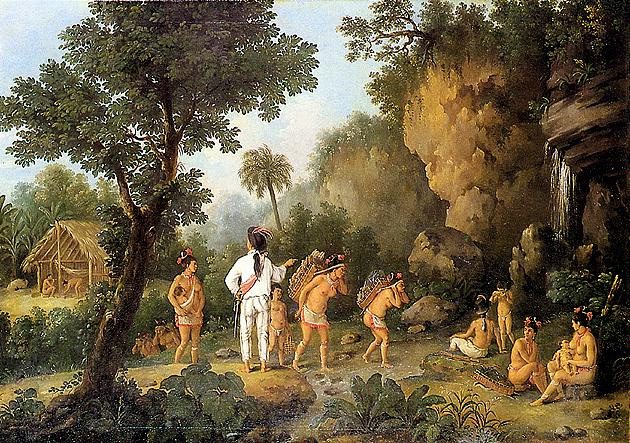 Pedro Alvares Cabral, after his discovery of Brazil in 1500, with native Indians (via The Jesuits and Slavery in Brazil)

This dynamic crated several different types of indigenous populations in São Paulo. The first group were those members of Jesuits towns of wage earners (aldeas) who came as captives from faraway places and often spoke many different unintelligible languages. After the 1649 Jesuit expulsion, the towns never recovered; they remained small and depopulated even after the Jesuits were allowed to come back to the province thirteen years later.

The second group were the indigenous slaves, working on settler’s ranches and in their households. Monteiro reconstructs the system of slavery in some detail. Slaves grew their own food (corn, manioc) and worked growing wheat. Wheat left the province on the back of Indians slaves too. Porters took the cargo to the port of Santos to be shipped to the sugar plantations of the northeast and Rio. Using slaves, not mules, allowed settlers not to have to invest in road infrastructure between the Paulista interior and the port.

Despite the stifling violence that characterized this society, indigenous slaves enjoyed some agency and some mobility.  Slaves ran away. They also used church tribunals to initiate freedom suits. They also sought self-manumission and recreated fictive communities through the use of godparents and cofradias (brotherhooods). By the late seventeenth century, slave agency via runaway slave communities , freedom suits, self-manumission, and creolization, along with the arrival of African slaves, partially put an end to indigenous slavery in the province. Yet far more important to the demise of indigenous slavery was the growing difficulty in getting indigenous slaves from the interior.

The third group were those natives who remained sovereign and who therefore were either the target of raids or co-participants in Paulista raids. These groups disappeared from the coast as they removed themselves into the interior or were wiped out by disease and interethnic warfare (the War of the Tamoio,1550-1570, for example).

Monteiro reconstructs in detail the political economy of Paulista raids to get slaves and thus maintain Brazil’s ability to grow grain. As Tupis abandoned the coast, Paulistas went after the Guarani-Tupi located between Sao Paulo and the city of Asuncion in Paraguay. Monteiro describes how over the course of several decades, raiders organized large expeditions with Indian allies to net hundreds of Guarani slaves from the southwestern interior, particularly the Jesuits’ missions in Paraguay.

Under the false pretense of prospecting for mines of silver and gold to create a legal cover, the largest Paulista landowners led these expeditions themselves. Men like Raposo Tavares built reputations, fortunes, and noble lineages out of his raiding exploits.  The era of large raiding expeditions, however, ended in the 1640s when the Guairá acquired guns and resisted large attacks in fortified Jesuit missions. Raids became death traps and a disaster for the businesses of leading Paulistas.

The raids, however, continued as the preferred enterprise of the poor. Raiders pressed deep into the interior of Matto Grosso and Maranhão. These raids lasted years and required involved logistics, including clearing the forest and setting up temporary settlements to grow food. These expeditions would later establish the fame of raiders as the men who first established the national territory of Brazil.

Monteiro brings the legendary raiders down to size. Paulistas built Brazil’s granary on the back of Amerindian slaves and devastating raiding expeditions that permanently changed the social ecology of the interior. Moreover, Paulistas did not create a frontier society of equals but a profoundly hierarchical one, split between ruthless lords and poor settler peasants, whose path to social mobility was the piecemeal collection of indigenous slaves in never ending, pointless raids into the interior. Monteiro also brings the Jesuits down to size.  The Jesuits opposed slavery by creating towns of wage earners but their theology did nothing but confirm the authority of “just war” and “rescue” as the twin ideological pillars of slavery. The Jesuits battled slavery without addressing slavery’s underpinning justifications. Historians, however, should remain grateful to the Jesuits because their effort to regulate slavery created a large archive of petitions, declarations, and justifications upon which Monteiro’s masterful study rests.

Twenty-five years after its original publication, Negros da Terra stills stands, a testament to the strengths of Brazilian historiography. It is still path breaking when compared with the growing Anglo American scholarship on Amerindian slavery.

From There to Here: Jorge Cañizares-Esguerra
Puritan Conquistadors
Jerónimo Antonio Gil and the Idea of the Spanish Enlightenment
When Montezuma Met Cortes