My archive contains documents my father collected about our family history, old photo albums going back to the early 20th century, a daguerreotype from even earlier, and some very odd objects, including this watch chain, which is made out of human hair. 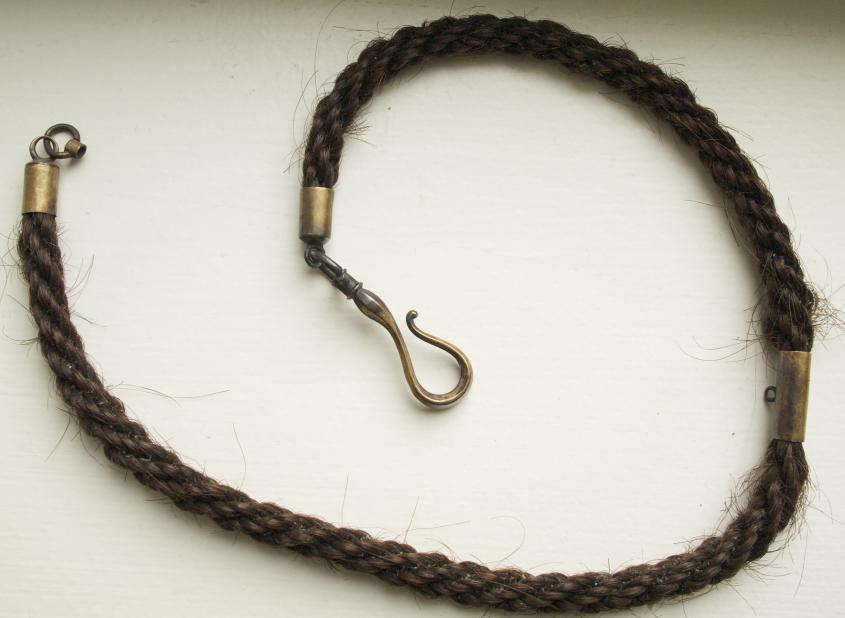 In the middle of the nineteenth century, men and women in the US, following the Victorian British fad, wore watch chains, earrings, and brooches made out of hair, often as mementos of loved ones who had died or gone off to war. Unlike a memento mori, or a reminder that death is inevitable, relics such a loved one’s hair suggested the persistence of life even after death.

There is something of the religious relic in the hair ornament: a piece of the body that endures after death that can be both venerated and consoling. But we keep precious religious relics like the bones of saints in houses of worship. Hair jewelry was worn on our own bodies.

Now it seems creepy to weave adornments out of something so carnal.  What changed?

Major cultural shifts are notoriously difficult to explain, but a few of the possibilities for explaining our modern distaste include the arrival of inexpensive Kodak cameras that allowed people to keep evocative reminders of loved ones that were free of actual body parts.

The popularization of psychoanalysis and the sanitation of death practices made our desire for proximity to other people’s dead bodies seem a little neurotic. And the carnage of World War I may have diluted our interest in the elaborate mourning rituals so popular in the nineteenth-century Anglo-American world.

My mother kept this hair chain in a leather glove box.  We don’t know whose head provided the hair or who made it. But it was an object of fascination for her as a child, as it was for us: a mysterious but intimate link to the people in our past.