The trip from Trinidad, Cuba to Havana was very hard, as our landlady misled us in order to make a commission off a local cab company. She convinced us not to take the tourist bus, which is very comfortable, spacious and has a W.C. in the back. She said the cab is cheaper and goes door to door, which is a blessing. But it was a colectivo, and the driver tried to pack us in like sardines with 5 other big, hearty tourists. Three guys had the good sense to back out of the packed van and then the driver refused to take the rest of us unless we paid extra. The haggling went on until past 10:30 when the tourist bus departed and that option was off the table. But the free market, such as it is in Cuba, intervened: another smaller van stopped and the remaining four of us hopped in and took off for Havana. Todo bien? No. We get out to the main highway, a six lane affair with almost no traffic but horse carts, motor scooters, pedestrians and 1950s cars and trucks, and Soviet Ladas. The driver whips out his cell phone and dials numbers and texts and who knows what else while weaving from the center lane to the right. He gets several calls on his smart phone, which he lets ring loudly for a long time because he has a lewd, really lewd, American rap song as a ring tone. But he swears when he can’t hear for lack of good reception. Then he stops for gas, saying he was almost out, but the pumps there didn’t work, and a man with a long rod in his hand was screaming at everyone, obviously having a mental breakdown. Big burly truck drivers surround him. I thought they were going to beat him senseless, but apparently they had had psychiatric training for their professional licenses, because they soothed him until he sat down and sobbed like a baby. The big truckers patted him on the back and looked on with concern and sympathy. Maybe he was one of them. Meanwhile, we stupid tourists were standing around in the sun until the driver told us to find shade in this, the hottest season of the tropical year. 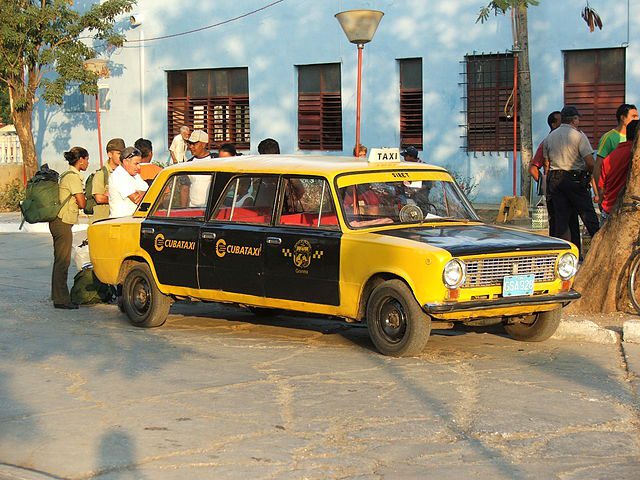 Meanwhile, the gas station attendants collect enough gasoline in a big bucket and dump it into the underground gas tank, kind of like priming the pumps, and our driver gets enough gas out of one pump to get us all, shaken not stirred, to Havana. I thought he would demand more money too, but he didn’t. When we got to town, we have a discussion about where he should drop us off, and then he abruptly switches lanes. We hear tires screeching from the emergency braking of a 1957 Chevrolet that prevented a collision.

When we arrive at our accommodations at a private home, the casa particular, we discover that we only have 5 pesos to our name, and we need to get to a money exchange before it closes in 27 minutes. But it was raining with one of those late afternoon downpours. The streets are flooding and we get soaked but we make the money changer on time. 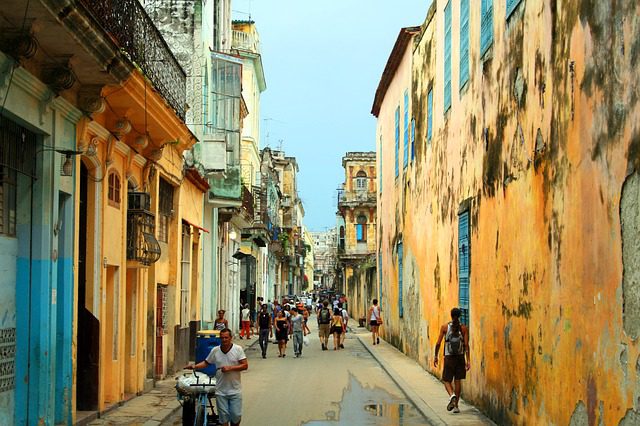 Streets of Havana after a rainstorm

Finally, we find a fine private restaurant that they call a paladar. Nice view of the rain outside and beautiful table settings and fine imported table cloths. We begin with a cold beer, the local Bucanero, translated as buccaneer or pirate, and begin to relax. We order the house specialty, Ensalada de Pulpo, squid salad. But they bring us tuna salad. We say we didn’t order that. The waitress says we did. We wanted Pulpo, we say drawing out the puullll in pulpo for emphasis. She says we’ll have to pay for both the tuna and the pulpo. A lengthy discussion ensues off in the corner among three waiters, who give us surly looks. The head waiter, a man, comes over and smiles. He will give us the pulpo and we don’t have to pay for the tuna. The pulpo salad was more than worth the haggle, but we order an ice cream sundae for dessert and the male waiter drops it on the marble floor and glass breaks all over. But we get another and it tastes great!

That was yesterday.  Today we rest.