Originally from Macon, Alabama, Julien Sidney Devereux, Sr (1805-1856) moved to east Texas where he eventually purchased land in Rusk County. This plat would eventually become Monte Verdi, one of the highest producing cotton plantations in the state, where over fifty Africans were enslaved. The Devereux family papers and the maps of the Texas General Land Office, including Julian Devereux’s will (1852) and a plat map of Rusk County (1846-1861), yield rich information about the institution of slavery. 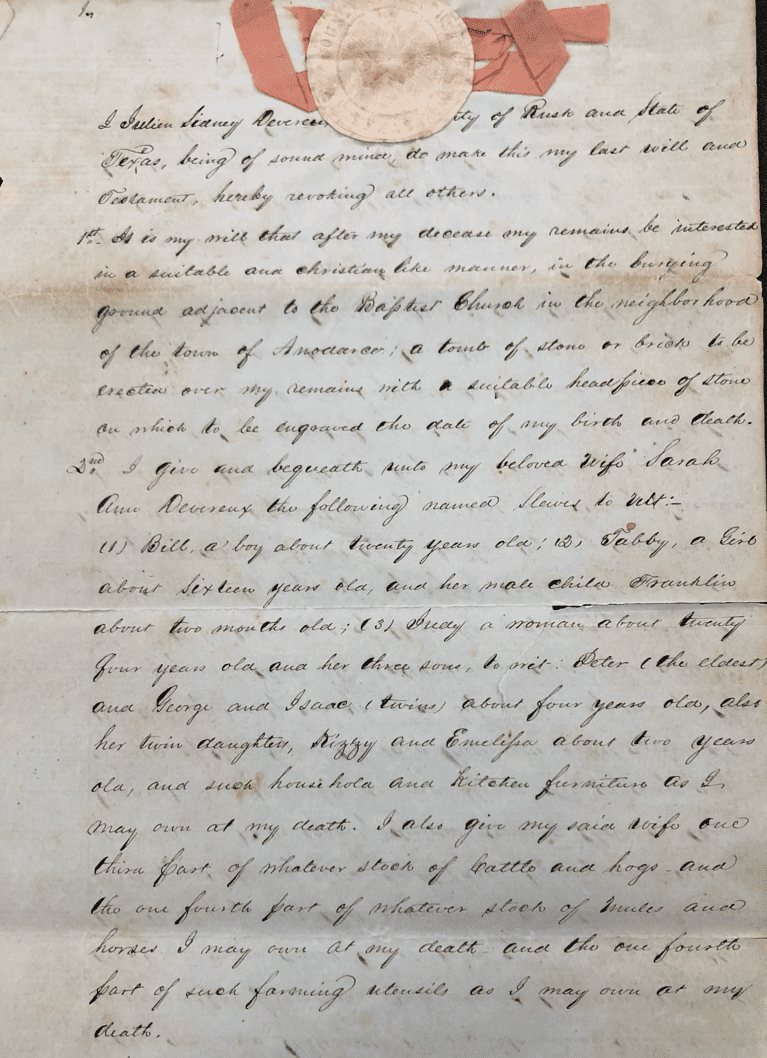 On May 7, 1852, Julien Devereux signed his final will and testament. Thirteen of the fourteen sections of his twelve-page will dealt explicitly with the institution of slavery. Sections two through six of his will present a rigid, hierarchical system to control the distribution of enslaved persons among his family members. Devereux named the slaves who, along with the furniture and cattle, were to be willed to his wife and daughter in sections two and three, respectively. Should his daughter not marry or bear children by the age of twenty-one, he noted that all willed enslaved people were to be turned over to his wife. In section four, he bequeathed a nineteen-year-old boy, a twelve-year-old girl, and “their increase” to one of his sons. The increase allotted to his son appears to allude to the arranged breeding of enslaved people and the enslavement of their unborn children. Section five established the equal distribution of Devereux’s remaining fifty-six enslaved persons and all of their future children among his remaining sons. Section six included three stipulations controlling his widow’s actions to ensure that his enslaved persons and property remained within his direct lineage. He declared that his wife must remain on the plantation and under the supervision of his chosen executors, that she could not sell any property or slaves during her lifetime, and that she would relinquish all willed property and enslaved people should she remarry.

The peculiar affection for the enslaved also emerges in the will. In section eight, Devereux appeared to reward an enslaved man and woman for their “long and faithful service” by allowing them to nurse his children. In addition, Devereux declared that the enslaved should never be sold to pay debts because they are “family slaves.” Instead, he reserved over eleven hundred acres of land to be sold if necessary. Finally, Devereux declared that family slaves become fixed by his will thus demonstrating the way enslavement became predetermined and hereditary. 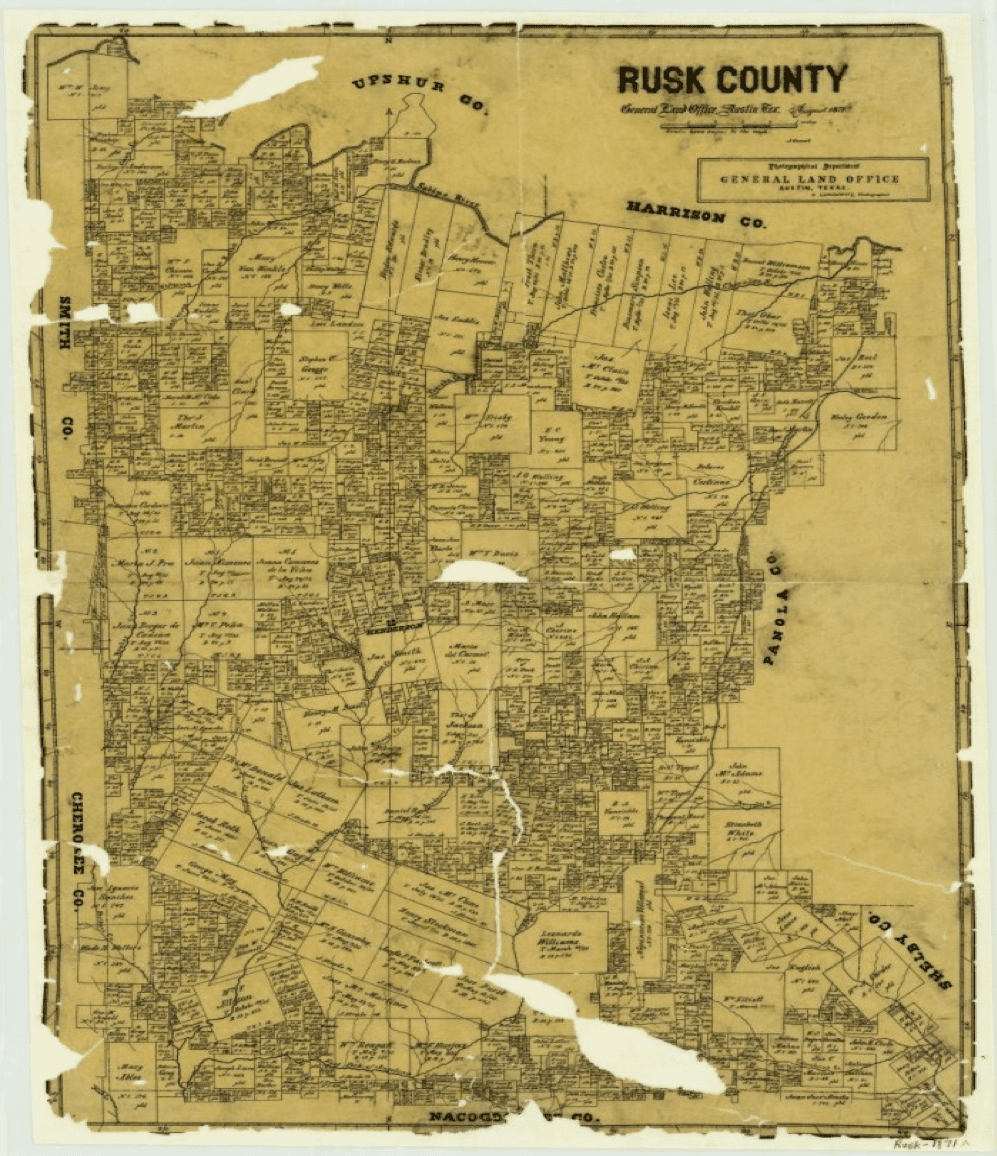 The accompanying county map incorporated in this analysis of Devereux’s will challenges some common assumption about institutional slavery. To shore up the distribution of public property, the Republic of Texas Congress formed the General Land Office (GLO) in 1836. This map of Rusk County was produced by the GLO and represents plats of property purchased between 1846 and 1861. The density of the map shows that few plats appear to be large; the majority of holdings appear to be quite small and crowded near others. Second, Devereux’s plantation had one of the largest enslaved populations in the state of Texas, at fifty-six. In Rusk County, plantations were not isolated, rural locales with hundreds of enslaved people, as if often assumed. This map shows an densely-settled region where the number of enslaved people would have been similar o that of the Devereux plantation at Monte Verdi.

Collectively, these documents illuminate numerous aspects about the institution of slavery in Texas on the eve of the Civil War.

I  Julien Devereux . . . State of Texas, being of sound mind, do make this my last will and testament, hereby revoking all others.

I hereby appoint the said Sarah Anne Devereux guardian of the persons and property of my said sons Albert and Julian and such other child or children as she may have by me, and in case she should die then it is my will that Doctor Peterson T. Richardson will take the guardianship of said two sons and such other children as she may have as aforesaid.

You might also like:
The Enslaved and the Blind: State Officials and Enslaved People in Austin, Texas
Slavery World Wide: Collected Works from Not Even Past
White Women and the Economy of Slavery