An earlier version of this story was published on Forth Part of the World.

I wasn’t looking to find a story of abounding love when researching violent episodes of Texas history. Then I ran across a Texas newspaper article that shed a brief light on the lives of a Black woman and a Mexican man who had lived as husband and wife in the 1840s, twenty-five miles northeast of Victoria, Texas. She was a woman forced to live in bondage in Jackson County, near the town of Texana, in present day Edna, Texas. Her husband was a Mexican man who was likely indentured, employed, or a peon in that same vicinity.

The report, unsurprisingly, did not fully document their lives, experiences, or bonds of intimacy. It did, however, document a glimpse of two lives whose stories and relationship often go untold in the archive. This glimpse and the many questions the source delivered compelled me to further explore this couple’s relationship and harrowing flight to freedom. As a historian whose work investigates the experiences of enslaved and free Black women, men, and children who sought freedom across transnational frontiers, I wanted to learn more about this couple. I was interested in knowing more about the woman and her origins. Was she born enslaved in Texas? How long was she held in bondage near Texana? Had she tried to run to freedom before? What was her trade? How many languages did she speak? The archive has a history of silencing the Black experience and Texas has historically engaged in a disconcerting suppression of its Black past. Answers to my many questions, therefore, proved daunting tasks that led me to creative ways to study this couple’s narrative. I turned to investigate the environment and history of the geographic localities where this woman was held in order to learn more about her life, what she may have witnessed, and her tragic journey to freedom. 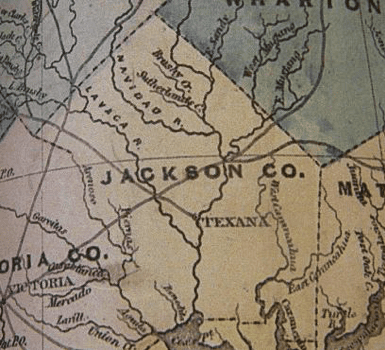 The region where this courageous Black woman was held enslaved had been largely inhabited by Tonkawa and Lipan Apache tribal communities up until the 1830s, when they were unsettled by a group of Anglo colonizers who arrived as part of Stephen F. Austin’s Old Three Hundred colonization program. In 1832, these Anglo-settlers led the Sandy Creek assault against the native communities living in the area and destroyed remaining Tonkawa and Lipan Apache settlements. Six slave holding families, originally from Alabama, consolidated power over the area. These six families redeveloped the region’s agricultural, cattle, and trading industries through the labor of the people they held in bondage. Was this fearless Black woman brought enslaved from Alabama? Was her family forced to move to Texas alongside her? How did she come to meet the Mexican man? It is likely that she was forced to toil in both sugar and cotton crops, staples that turned high profits in Jackson County during that time. Perhaps she may have worked in any of the many groups of enslaved people who packed, prepared and carried the products of said crops to the local port on the Lavaca River. She may have played a central role in the trade that was sent out weekly on the steamboat that ran from Texana, through the pass of Matagorda Bay, to other parts of Texas, Louisiana and the Gulf South.

This daring woman was one of hundreds of enslaved individuals who turned this locality into a successful trading hub. In the early 1850s, Texana was made the seat of Jackson County, a place that became an important military and trading center that linked Texas to the rest of the US South. During that period, 34% of its population was enslaved, and only a decade later, in the 1860s, the enslaved population had risen to be half of the total population because cotton and sugar drove the land’s economic affluence. After the Civil War, when slavery ended, this prosperous area, developed by enslaved people, became a ghost town. Yet, in 1848, when this story takes place, the region was booming and welcoming of visitors and settlers, except Black and Brown. The people governing the county were certainly hostile to enslaved and free Blacks and expressly militant against settlers of Mexican descent. Interestingly, the Mexican man in this story, by 1848, had managed to live across that county for several years. Why? What was his experience upon arrival? How did he end up living in Jackson County, Texas?  Where did he come from? How did he come to meet his wife? While we may never know where this couple met, how their lives intertwined, or how their plan to run away was devised and developed, we do know that this couple ultimately fled together. It is imaginable that both desired a future where they were free. A future far removed from Texas slavery.

In the summer of 1848, and perhaps for years before, these two lovers carefully planned their escape, surely detailing every trail, bend, and river they would encounter and need to traverse on their journey to freedom. In early July of that same year, they took two horses and rode them southward, hoping to leave Texas behind and reach safe havens beyond the Mexican border. 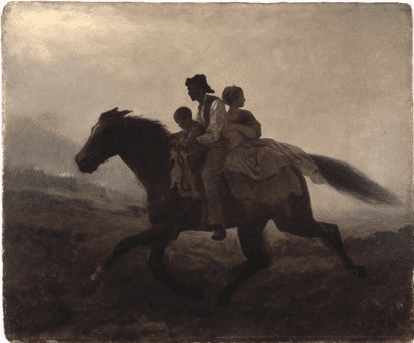 They made their way towards Mexican territory, but as they reached the Lavaca river they were intercepted and pursued by a group of slave hunters, unscrupulous employees of a highly profitable profession. They were quickly surrounded. They stood no chance and received no mercy. The Romeo of this story was lynched. His body was returned to the place where authorities claimed he had “stolen” his enslaved wife. His body was then hung and displayed as a public reminder and threat to all others who hoped, braved, or even thought to run away. In this story, Juliet faced an unimaginable fate. Tortured and robbed of the freedom she almost secured for herself across a Mexican frontier, she was forcibly returned to her ruthless enslaver. The rest of her story remains hidden, silent, until it is found, and told.

The report of this couple’s story is but a fragment, a tiny visible thread in the vast unknown tapestry of the lives and experiences of thousands of women, men, and children who faced, fought, resisted and survived (or failed to survive) enslavement in Texas. It offers us a window into the vibrant, diverse and porous composite that was Texas, during a time when the institution of slavery thrived and consolidated on this side of the border, and freedom existed just a few miles south, on the other side.

Theirs was a story of bravery, of life and death: a harrowing tale of sacrifice, impassioned desire for freedom, and heartbreak different from any I have ever encountered in the archive. We know very little about their relationship. Did they have children? How did he envision freedom at their destination? Was family waiting for them in Mexican territory? Although reconstructing their background and the extent of their intimacy may not be possible, we do know that in their story love was empowering, death was swift and its perpetrators vicious. They sought freedom, yet instead they found a macabre ending committed by Texas vigilantes and sanctioned by laws that protected and promoted the institution of slavery in Texas. Theirs was a story raw, fleeting, and heartbreaking; one where freedom was worth the most violent “‘til death do us part.” Their lives and death are a love story shaped by slavery, freedom, and resistance; marked with blood and violence and no happily ever after. This record documents a rare biography of a couple’s partnership existing amongst a burning desire for freedom. It is a memoir of love in time of Texas slavery.

Other Articles by María Esther Hammack:

The Illegal Slave Trade in Texas
Textbooks Texas, and Discontent

The Paperwork of Slavery
Slavery in America: Back in the Headlines
Slavery and Freedom in Savanna