In December 1939 Academy Award nominated, African American actress Hattie McDaniel was barred from attending the premiere of Gone with the Wind in Atlanta, Georgia because of her race Just four months later, a quite different scenario played out in New York City. In April 1940, the first elaborate premiere of a Hollywood studio-produced film was held in Harlem, the cultural capital of black America. Paramount Studios sponsored two simultaneous world premieres of Buck Benny Rides Again, a movie which, in every way but actual billing, co-starred American network radio’s premiere comedy star, Jack Benny, and his radio valet and butler, Eddie “Rochester” Anderson. One gala was held at the studio’s flagship theater, the Paramount, in midtown Manhattan. The other was held at the Loew’s Victoria Theater on 125th Street, in the heart of Harlem. In a most unusual move in an industry that limited roles for African-American performers to tiny, often uncredited parts as servants, Paramount also aggressively promoted the film’s surprise, break-out co-star, African American actor Anderson. 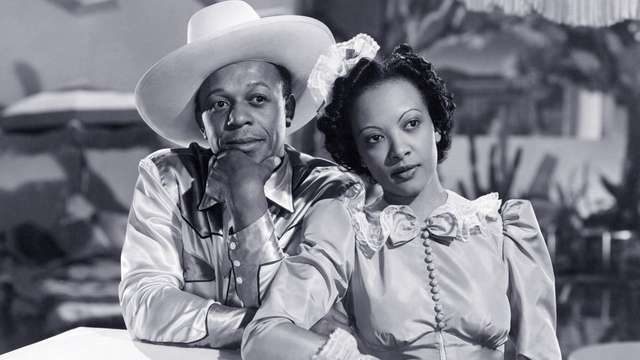 Paramount’s publicity department released a barrage of publicity in New York and in major African American newspapers across the nation, touting “Hollywood goes to Harlem!” for the separate premiere of Buck Benny Rides Again on the night before, April 23, 1940. The Victoria Theater was a 2,400 seat picture palace adjacent to the Apollo Theater. Eddie “Rochester” Anderson, Jack Benny’s film co-star, was given the “hail the conquering hero” treatment in Harlem—an estimated 150,000 people lined the streets as Anderson and major political, social, and entertainment dignitaries of black America paraded to the theater. Jack Benny, his radio cast members, film director Mark Sandrich and Benny’s radio comic nemesis Fred Allen, all appeared on stage at the Victoria to praise Anderson. After the show, Anderson was honored with receptions at the Savoy Ballroom and the Theresa Hotel. The event was extensively covered in breathless detail by the nation’s black press, and blow-by-blow coverage of the premiere was carried on a local black-oriented radio station. 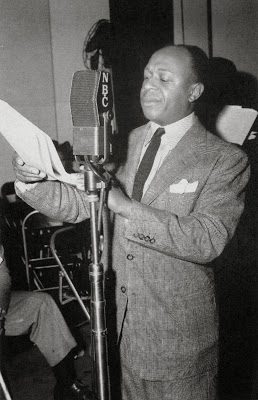 Anderson’s role in the Buck Benny film as Jack’s valet “Rochester” carried over from radio, in a witty and “hip” display of intermedia storytelling and crossover fame. Anderson’s performance stole the movie, as it gave “Rochester” far more screen time than black actors had found in any Hollywood film that had not been a black cast feature. Buck Benny featured Rochester’s witty retorts to Jack’s (whom Rochester cheekily calls “Boss”) egotistical vanities, croaked out in his distinctive, raspy voice. The film and the role positioned Anderson as one of the most prominent African American performers of the era, despite—and because of—mainstream white racial attitudes of the day. It took star status in a rival medium (as co-star with a white comedian) for a black actor to achieve prominence in American film.

Buck Benny was among the highest grossing movies of the year at the American box office in 1940. Throughout the nation, movie theaters billed the film on marquees as co-starring Benny and “Rochester.” In many theaters, especially African American theaters in the South, but also in white and black neighborhood movie houses elsewhere across the nation, the marquee billing put “Rochester’s” name first above the title. The film’s box office success led to recognition of Anderson and Benny as spokesmen for civil rights and integration. The two were named to the Schomburg Center Honor Roll for Race Relations for their public efforts to foster interracial understanding. This moment before World War II further raised the consciousness of a young generation of African Americans to fight for civil rights, in an interlude before racist white backlash coalesced to further limit black entertainers in American popular media. Anderson’s success caused him to be hailed in black newspapers as being a harbinger of a “new day” in interracial amity and new possibilities for black artistic, social, and economic achievement.

Eddie Anderson’s radio-fueled movie stardom complicates the shameful Hollywood story of racism, racial attitudes, and restrictive limits on representations of African Americans in film and popular entertainment media in the late 1930s and World War II era. A middle-aged dancer, singer, and comic who’d forged a regional career in West Coast vaudeville and mostly un-credited servant roles in Hollywood films, Anderson rocketed to stardom due to his role on Jack Benny’s Jell-O program, one of the top-rated comedy-variety programs on radio in the 1930s. Anderson’s “Rochester” role in his first years on Jack Benny’s radio program (1937-1938) had contained heavy doses of minstrel stereotypes—stealing, dice-playing, superstitions—but from the beginning the denigratory characteristics were counterbalanced by the valet’s quick wit and irreverence for Benny’s authority, accentuated by his inimitable voice and the wonderful timing of his pert retorts and disgruntled, disbelieving “Come now!” This spark of intelligence and individual personality that Benny and his writers gave Anderson to work with, which he so embellished with his performance, made him an immediate sensation on Benny’s show. 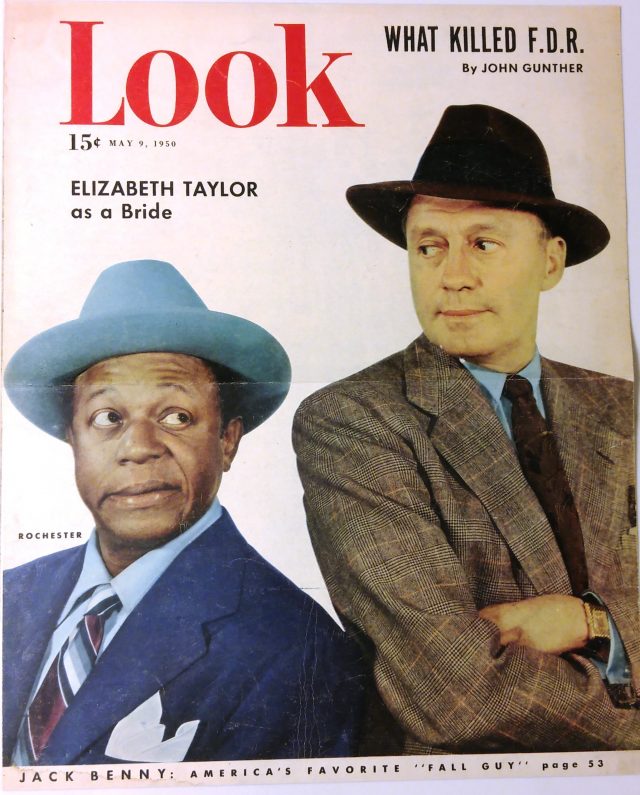 Rochester critiqued Benny’s every order and decision, with an informality of interracial interaction unusual in radio or film depictions of the day. His lively bumptiousness raised his character above other, more stereotypical black servants in American popular media. Rochester could appeal to a wide variety of listeners, as historian Melvin Ely notes of “Amos n Andy.” He always remained a loyal servant and had to follow Benny’s orders, so he was palatable to those listeners most resistant to social change. Yet, in a small way, Rochester spoke truth to power, and he was portrayed by an actual African-American actor, so he gained sympathy and affection among many black listeners.

The enormous box office success of Eddie Anderson’s three co-starred films with Jack Benny in 1940-1941 fueled optimistic hopes in the black press that prejudiced racial attitudes could be softening in the white South. Rochester was hopefully opening a wedge to destroy the old myths that racist Southern whites refused to watch black performers, the myths to which racist white film and radio producers so stubbornly clung. The Pittsburgh Courier lauded Anderson as a “goodwill ambassador” bringing a message of respectability and equality to whites in Hollywood and across the nation. The hurtful representations of blacks in the mass media of the past could finally be put aside, The Los Angeles based African American newspaper, The California Eagle, optimistically argued in an editorial that Anderson’s example pointed to new hopes for interracial tolerance and black cultural and social achievement:

Two years ago Americans became conscious of a new thought in Negro comedy. It was really a revolution, for Jack Benny’s impudent butler-valet-chauffeur, “Rochester Van Jones” said all the things which a fifty year tradition of the stage proclaimed that American audiences will not accept from a black man. Time and again, “Rochester” outwitted his employer, and the nation’s radio audiences rocked with mirth. Finally, “Rochester” appeared with “Mistah Benny” in a motion picture – a picture in which he consumed just as much footage as the star. The nation’s movie audiences rocked with mirth. So, it may well be that “Rochester” has given colored entertainers a new day and a new dignity on screen and radio.

Eddie Anderson’s cross-media and cross-racial stardom was very real in the U.S. popular media between 1940 and 1943. Unfortunately, a series of unforeseen events, and the growing racial strife in the nation during the war curtailed Anderson’s film career. MGM attempted to build Anderson into a greater star, featuring him in its all-star black cast dramatic musical production of “Cabin in the Sky” with Lena Horne. But “Cabin in the Sky” was released in summer 1943, just as race riots erupted in Detroit and other manufacturing and military base cities over labor strife. Timid film exhibitors did not play up Anderson’s film or stardom for fear of violence playing out in their theaters. Racist white backlash against blacks gaining footholds of integration and prominence in American public life began spreading across the south. Anderson’s subsequent appearance in “Brewster’s Millions” (Paramount, 1945) caused the film to be banned in Memphis for its portrayal of pleasant interracial interactions. Although he remained the most prominent (and highest paid) black performer on radio and television through the late 1950s, his stardom faded to being only a core component of the Jack Benny ensemble.

From Kathryn Fuller-Seeley, Jack Benny and the Golden Age of Radio Comedy(2017).

Would you like to learn more about radio, film, and race in the US?

Melvin Ely, The Adventures of Amos n Andy: A Social History of an American Phenomenon. (1991). Ely examines the complexities of how two white entertainers created two comic black radio characters that divided American audiences, who either loved or loathed the most popular show on radio from 1928 until 1950.

Michele Hilmes. Radio Voices: American Broadcasting 1922-1952 (1997). This marvelous cultural history of the rise, flourishing, and demise of radio in American culture broke new ground in discussing the importance of gender and race for radio producers, narratives, and listeners.

Miriam J. Petty, Stealing the Show: African American Performers and Audiences in 1930s Hollywood ( 2016). Petty uncovers the many subtle ways that black film performers layered meaning, dignity, and outstanding talent into the minor roles they were given in American films.

Barbara Savage, Broadcasting Freedom: Radio, War and the Politics of Race (North Carolina, 1999). Savage explores the opportunities that wartime needs for African-American participation and support provided for more equitable representation and address in the nation’s most widespread media form.