This photograph captures a 1943 family outing to The University of Texas, in Austin. 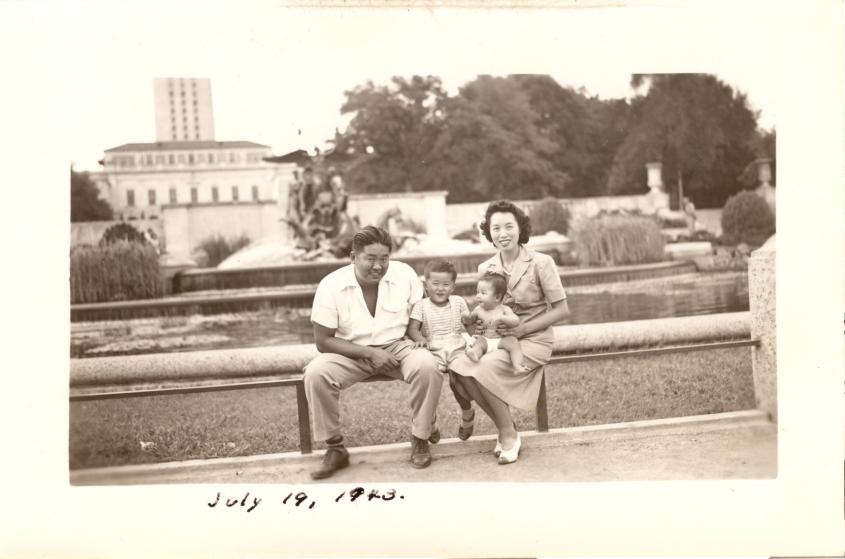 The young father, Fred Wong, was a grandson of one of “Pershing’s Chinese“–a group of 527 Chinese who accompanied General John J. Pershing into the United States after the failure of his campaigns against General Francisco “Pancho” Villa in 1917.  Villa threatened retaliation against the Chinese for aiding Pershing, who determined to bring them back with him to the United States even though he had to lobby for special federal permission to do so in violation of immigration laws that banned the admission of all Chinese laborers.  Many of these refugees settled in San Antonio where they established grocery stores, laundries, and restaurants.

Fred Wong grew up in San Antonio and in 1936 married Rose Chin from Chelsea, Massachusetts.  They moved to Austin in 1938 and opened New China Food Market at 714 Red River. Fred served as a Rollingwood Councilman and R.C. became a well-known artist.  The couple had three children, Mitchel–reportedly the first Chinese baby born in Austin–and Linda, and Kay.  Mitchel went on to attend UT and became a leading ophthalmologist in central Texas, credited with introducing Lasik surgery to the region.

On May 11, 2011, Mitchel Wong was honored with a Legacy Award at the Asian American Community Leadership Awards jointly organized by UT’s Division of Diversity and Community Engagement, the Center for Asian American Studies, and the Texas Exes Asian Alumni Network.

For more information about Chinese in Texas, please visit:
The Institute of Texan Cultures
The University of Texas at Austin’s Asian American Studies website
The Texas State Historical Association online

You can look up materials available at the Austin History Center, here in its finding guide.