This year Not Even Past asked UT History faculty to tell us about a book that they love teach. What makes it a great book for teaching history? What interesting and revealing questions does it raise? How do students respond to it?  This is the first article in what we hope will be a series on books we love to teach. 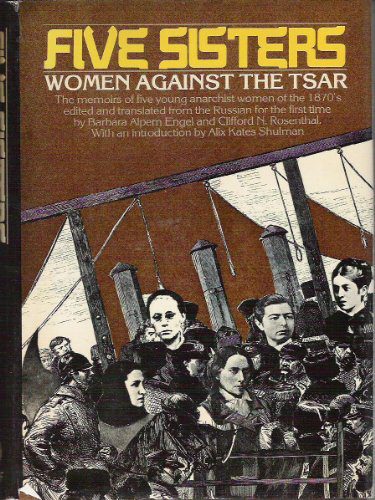 Why would anyone give up a life of the utmost leisure and privilege to become a revolutionary, isolated from society and hunted by the police? How does an individual choose to become a terrorist – to kill for an idea or an ideology? What country comes to mind when you think about these questions? It is probably not nineteenth-century Russia and you are probably not imagining women in these roles. Yet arguably, modern terrorism was born in the aristocratic manor houses of the Russian empire. This collection of translated memoirs takes us deep into the everyday lives of the girls who assassinated Tsar Alexander II in 1881.

I have taught this book almost every year since I began teaching in 1985, every time I teach my survey of Russian history from 1613-1917. These fascinating and accessible memoirs give us a highly detailed and deeply personal view of the decisions five revolutionary women made on the journeys they took to the revolutionary underground. Vera Figner (1852-1942) is especially thoughtful and reflective about her path from childhood innocence to growing awareness of social and economic inequality on her parents’ estate, to her desire to help the impoverished in her province, to her frustration with her own abilities and government obstacles for personal improvement and social-economic justice. In 1872, at age nineteen, Figner went to Zurich to study to be a doctor so that she could come back and have a greater impact at home serving the poor. But in Switzerland she met radical thinkers and activists who cast doubt on her ideas about individual service and reform. When she and her friends returned to Russia, they decided that the only way to effect change was through revolution, and the only way to bring about a revolution –to spark a peasant uprising — was to assassinate the tsar. Figner was one of the chief agents of that plot, but instead of igniting revolution, the assassination ushered in a period of reaction and repression. Figner was eventually arrested but not executed, which gave her decades in prison to think about her life and write her revealing – and unapologetic — memoirs.

The moral ambiguities of the women’s ideas and actions fascinate my students year after year. Were these young women nothing more than spoiled rich kids with no sense of political realities or were they dedicated realists, taking the only steps possible to transform people’s lives in a country where the government was indifferent to the suffering of ninety percent of the population? How did they understand the moral stakes of their choices? What did they hope to accomplish? How did their lives as revolutionary women compare to those of revolutionary men? And are they comparable to terrorists in the twentieth century and today? The students’ discussion of these questions changes, often dramatically, from year to year, reflecting current events and their current political concerns, which provides its own set of historical lessons, and has the added benefit of giving me a sense of the issues that matter to the succeeding generations of students in my classes.

You might also like:
Policing Art in Early Soviet Russia
Great Books on Women’s History: Asia
Eisenstein’s “Ivan the Terrible” in Stalin’s Russia