On August 18, 1921, Anatoly Lunacharsky, the People’s Commissar of Enlightenment, wrote a letter to Jozef Unszlicht, a founding member of the Cheka, the Bolsheviks’ revolution-era secret police that eventually morphed into the KGB. As Commissar of Enlightenment, Lunacharsky was accountable for the educational, artistic, and creative development of all of Soviet Russia. In this capacity, he was responsible for government relations with the creative intelligentsia. The Cheka, on the other hand, was one of the early Soviet artistic community’s most formidable enemies. The letter is a request to Unszlicht for the release of art historian and critic Nikolai Punin, who had just been placed under arrest. 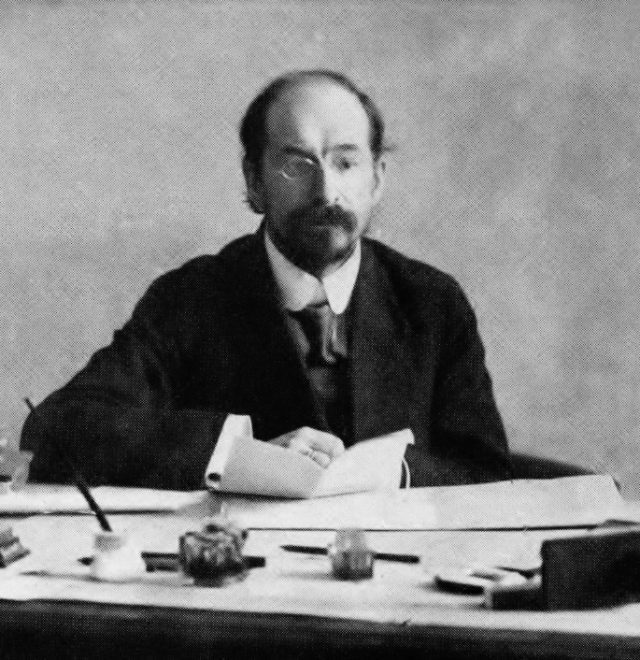 It was not unusual for Lunacharsky to write pleas such as this one on behalf of members of the intelligentsia who had been arrested or otherwise harassed by the Soviet government. He was known as a relatively liberal Bolshevik, a bleeding heart who advocated for countless artists and writers, many of whom he counted as friends. The commissar was especially close with Punin, whom he put in charge of the visual arts division of the Commissariat of Enlightenment in 1918. Indeed, it would have been rather shocking if Lunacharsky had not written a letter in defense of his own employee. As Punin’s boss, he would have wanted to show his loyalty and support. As a friend and intellectual supporter, he would have wanted to show his genuine desire to see Punin released and cleared of spurious charges. Luckily for Punin, he was in fact released from prison about a month after Lunacharsky sent his letter of appeal. Luckily for us, he kept a copy of that letter, which today can be found at the Harry Ransom Center at UT Austin. 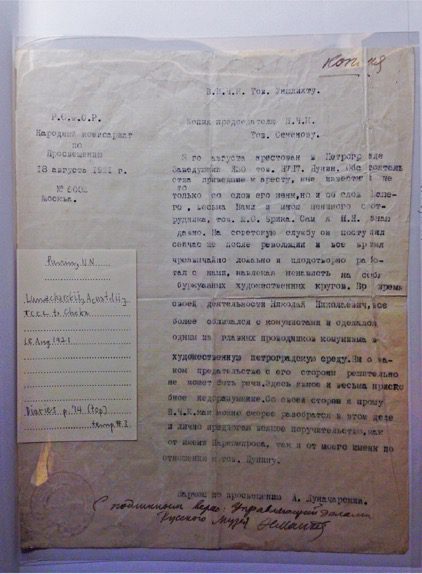 Original letter from Lunacharsky (Marked “Copy” in the top right).

For a document so seemingly obscure, Lunacharsky’s letter allows us to peer into both the tumultuous intellectual environment of the early 1920s and the broader story of the Communist Party’s persecution of the intellectual class. Punin’s arrest was not an isolated incident – he was one of more than 800 intellectuals picked up as part of the so-called Tagantsev conspiracy. This conspiracy was one of the earliest experiments in mass terror orchestrated by the Soviet secret police. It was intended to intimidate the intelligentsia, who, lacking peasant or working class backgrounds, were widely suspected of disloyalty to the revolutionary government. In this unnerving environment, the commissar had to strike a tone that was at once professional, personal, and, most importantly, ideologically correct, as the Bolsheviks understood that to be. Impressively, he manages to check of all of these boxes in his short letter.

It begins with the personal – noting contact with Punin’s wife and his long acquaintance with the arrested poet. Lunacharsky goes on to characterize Punin as possessing one of the most ideologically necessary personal traits: “[he] has worked with extraordinary loyalty and productivity, attracting the hatred of bourgeois artistic circles.” To be praised as a loyal and productive communist actively despised by the bourgeoisie was the best defense one could hope for when arrested for supposed counterrevolutionary activity. Lunacharsky concludes his appeal by putting his entire life and career on the table: “For my part, I ask the V.Ch.K. [Cheka] to immediately deal with Comrade Punin’s case and I personally give you my every guarantee, both in the name of the Commissariat of Enlightenment and in my own name.”

Of particular interest is what he omits. Punin was an easy target for arrest because he had worked to preserve Western artwork from destruction at the hands of radicals seeking to purge the new Soviet state of all “bourgeois” art. However, Lunacharsky’s only reference to the charges against the critic is: “there can definitively not be any talk of any sort of treason on his part,” and that the whole affair is obviously a “misunderstanding.” Lunacharsky does not even mention the art. He denies the Cheka the legitimacy of acknowledging that the preservation of Western art could be an offense that would merit arrest. 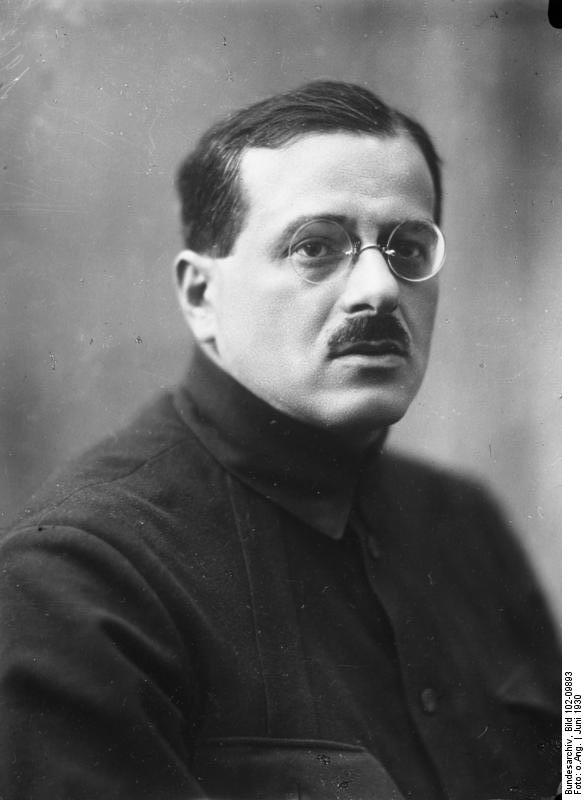 The fact that Lunacharsky addresses Unszlicht gives us a chance to consider this curious but relatively lesser known historical figure. The Cheka is typically associated with its infamous founder and director, Felix Dzerzhinsky. Unszlicht, however, is of particular interest to cultural historians because of his profound personal paranoia concerning the creative intelligentsia. In response to another of Lunacharsky’s interventions, Unszlicht admonished the Commissariat’s “utterly impermissible attitude toward foreign travel by our artistic forces,” many of whom, he claimed “are waging an overt or covert campaign against us abroad.” Coming from someone in charge of military intelligence, as Unszlicht was, this assessment was a far cry from reality. There was a peculiar logic to Bolshevik repression that still puzzles historians nearly a century later. It would be interesting to see Unszlicht’s response to this letter (if one exists), whether or not he tried to justify the arrest, and if so, on what basis. A mention of the preserved Western art would have indicated some degree of internal logic; citing trumped-up charges of “sabotage” or something similar would indicate a different motivation altogether. 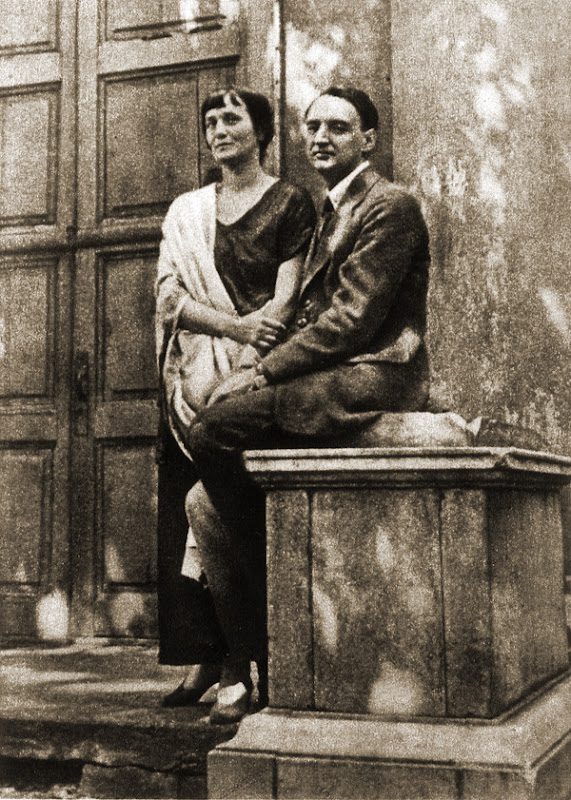 Nikolay Punin and Anna Akhmatova in Leningrad, 1927. Photo by Pavel Lukhnitsky via Monoskop.

Perhaps most intriguing, though, is the journey of the letter itself from revolutionary Russia to Austin, Texas. It sits in the Ransom Center among Punin’s diaries and select correspondence with his common law wife, the fearless poet Anna Akhmatova, who eventually attracted far more attention from the secret police than Punin. According to a note in the Ransom Center’s records, Punin separated these documents from the rest of his papers precisely to keep them away from Akhmatova. The poet’s works had been subject to censorship for years and Punin feared that his papers would also be censored if she found and kept them. Punin apparently decided that the most prudent course was to give these love letters and other documents to his more recent wife, Martha Golubeva. The documents passed through a few more hands within the family until 1974, when they were sold to the Ransom Center to fund Golubeva’s daughter’s ex-husband’s escape from the Soviet Union. The emotional gymnastics involved in these exchanges testifies to both the fraught nature of intellectual life over five decades of Soviet history and the value placed on intellectual property. Tragically, although that value began as an emotional and intellectual product, it was ultimately recast as a monetary one – one of the many ironies of life in this anti-capitalist state.

Read more by Rebecca Johnston at Behind the Tower.

Documents referred to in this article can be found in

On August 3rd IZO Director Comrade N.N. Punin was arrested in Petrograd. The circumstances that led to his arrest are known to me not only from the words of his wife but from the words of your colleague, Comrade M. O. Brik, highly valued by both you and I. Personally I’ve known N.N. for a long time. He entered into Soviet service immediately after the revolution and since that time has worked with extraordinary loyalty and productivity, attracting the hatred of bourgeois artistic circles. During his tenure, Nikolai Nikolaevich [Punin] has become closer and closer to the communists and has become one of the main proponents of communism in Petrograd’s artistic community. There can definitively not be any talk of any sort of treason on his part. Here we have a clear and entirely regrettable misunderstanding. For my part, I ask the V.Ch.K. [Cheka] to immediately deal with Comrade Punin’s case and I personally give you my every guarantee in this regard, both in the name of the Commissariat of Enlightenment and in my own name.

People’s Commissar of Enlightenment A. Lunacharsky