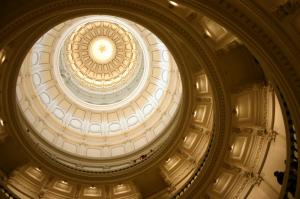 With much of the current budget debate centered on proposed reductions in funding for public and higher education, the biggest elephant in the room is the Texas Medicaid program.  It can break whatever budget the Legislature adopts and force one or more special sessions in the next two years. It is also the part of the budget that is the furthest beyond the Legislature’s control. This brief historical overview will attempt to put the Texas budget crisis into clearer perspective by addressing the following questions: what is Medicaid, where did it come from, and how much does it cost?

A centerpiece of President Lyndon Baines Johnson’s “Great Society,” the Medicaid program was enacted by Congress in 1965. As originally conceived, Medicaid paid for health care to low-income people through reimbursements to hospitals, clinics, and physicians. In subsequent decades, the program expanded to cover services for persons with disabilities, the elderly, children, and pregnant women, and to provide cash payments to certain low-income families with dependent children. Although states are not required to participate in Medicaid, Texas opted to join the program in 1967 (as has every other state). Participation in the program entitles the state to receive federal funding to match state money spent on services for eligible persons (this match rate varies somewhat among states, but generally hovers around 60-40 federal-state split), but it likewise requires the state to fund the program at federally required minimum levels.

For the first twenty years or so of Texas’ participation in the program, caseload increases in Medicaid did not unduly stress the overall state budget. Beginning in the late 1980s, however, Medicaid expansion at the federal level began having a dramatic impact on Texas Medicaid spending. Coupled with the explosive growth of the low-income population in Texas from 1990 forward, Medicaid grew by more than one million clients between 1990 and 1995. The vast majority of this growth consisted of pregnant women, newborns, and non-disabled children from age 0-20. Though caseloads leveled off in the second half of the decade (partly because Texas tightened eligibility standards and partly by virtue of a booming economy), they exploded again beginning in September 2001. In that month, Texas served nearly 2 million clients. That number mushroomed to 2.5 million by September 2003, almost 3 million by 2005, and nearly 3.5 million today.

In terms of spending, the Texas Medicaid budget grew an average of nearly 13% per year from 1990-2001 (the U.S. average was 10.9%). Since 2001, Medicaid spending growth has averaged more than 8% per year, well above the national average and far more heavily weighted toward children than in the rest of the nation. These numbers indicate an ominous trend: Texas’ population is becoming progressively younger and poorer. To put this into historical perspective, in 1971-72 Texas spent less than $400 million out of a nearly $8 billion budget on public health (about 5%), most of which went to Medicaid; a decade later the total had grown to about $5.5 billion of nearly $26 billion. By 1994-95, spending on health care alone had skyrocketed to $26.5 billion. To complete this depressing litany, today nearly one-third–$60 billion—of the state’s $180 billion budget pays for Medicaid and related health services, about 90% of which is spent on children, the disabled, and the elderly.

The problem for budget-writers is that there is literally nowhere to go but up. Unless federal law changes significantly, Texas cannot refuse services to Medicaid eligible clients, even if it doesn’t have the money to pay for them. Moreover, Texas’ eligibility levels for most client populations are already at the minimum in most categories and cannot be reduced without either a waiver from the federal government or a congressional overhaul of the program (one popular idea is a “block grant” system of funding that would let the states decide how to spend federal Medicaid money). Previous crises in Medicaid—particularly those in the early 1990s and another in 2003—were remedied by slashing eligibility, consolidating service delivery, reducing provider reimbursement rates, and underestimating caseload growth. These ideas are under consideration again this year, but barring major federal reform, it appears likely that Texas will pass a budget for 2012-13 that substantially underfunds Medicaid—possibly to the tune of $10 billion. With nearly one in five Texans living below the poverty line, the question is not whether Texas will have to pay the piper, but when.