Ultimately, the task of any historian is to piece together the experience of another time—to understand what it was like being on the streets of Paris in 1789. Photographs, primary documents and personal recollections offer important glimpses, but one digital history site specifically wants to understand how it sounded. “The Roaring Twenties”—a collaboration between Emily Thompson of Princeton University and Scott Mahoy of the University of Southern California—compiles audio files and written noise complaints from 1920s New York City to capture the utter cacophony its residents experienced. Arranged by sound type, geography and timeline, this database is a new type of documentary and experiential history—recreating what the Roaring Twenties sounded like. 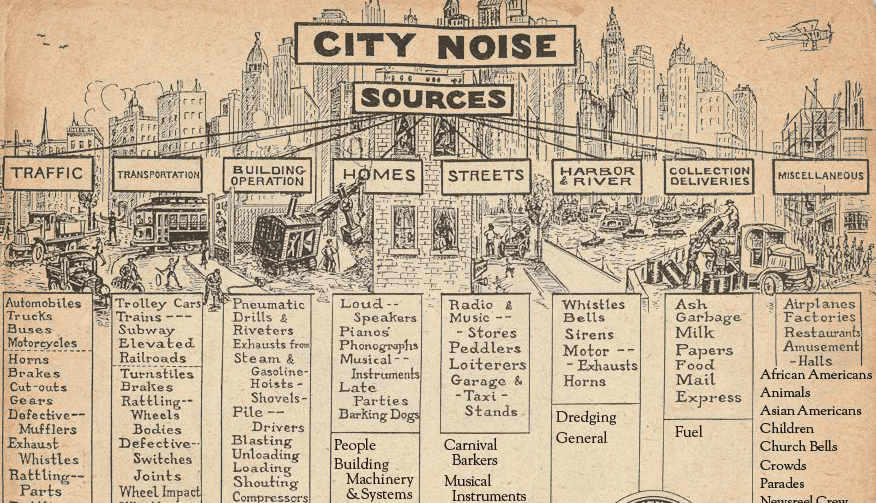 A screenshot of the “Sounds” section (The Roaring Twenties)

The variety of noises that 1920s New Yorkers endured is astonishing. Click on any of the listings in the “Sound” section and you’ll get the brief history of a particular sound: its source, its location, its formal noise complaint (if such documentation existed) and, in many entries, a contemporary piece of footage capturing the actual noise. It is remarkable to visit the utterly different sonic world these videos capture. While many of the auditory sensations caught on film would be familiar to present day residents—sirens, construction and honking cars—actually hearing (and seeing) them feels like entering a parallel universe. For the individuals seen on camera, all that rattling, whistling and yelling would have been the ordinary context for daily life; yet to us, it is exotic and bizarre. 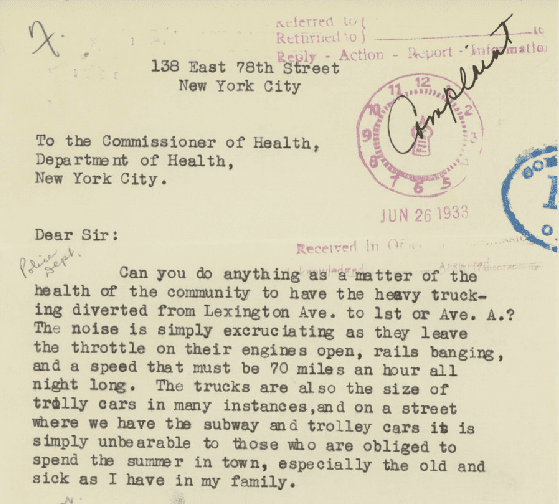 Screenshot of the formal complaint Louise P. Jenkins filed with the New York Commissioner of Health in 1933 regarding the sounds of trucks in her Manhattan neighborhood (The Roaring Twenties/NYC Dept. of Records, Municipal Archives)

In order to provide a spatial context for this historical soundscape, the “Space” section arranges each sound entry onto a map of the city. Manhattan has the highest concentration, but you can find yelling newspaper vendors, saxophone playing neighbors and noisy radios in every borough. Many of these sounds reflect the unique cultural and ethnic character of New York’s neighborhoods: there is a Kung Fu demonstration on Chinatown’s Mott Street; an “Ol’ Clo'” Jewish peddler looking for clothing to buy on the Lower East Side; and ferry boat whistles along the Battery promenade. They also reveal an industrial city at work. Gotham echoed with dynamite blasting, steel factory operations, riveting, and boring machines. 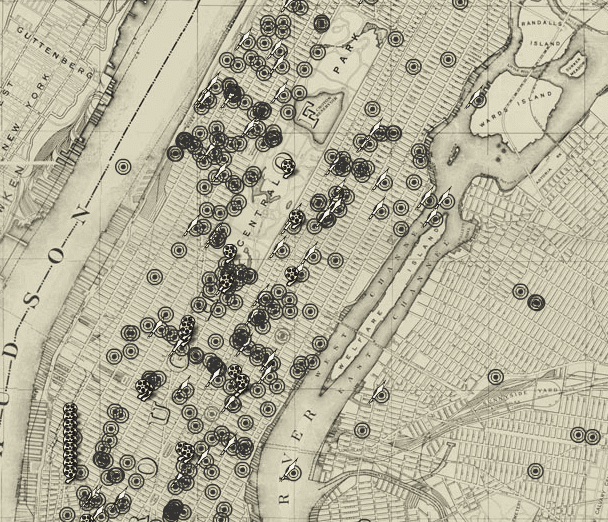 Screenshot of the “Space” section, which arranges different sounds onto a map of New York City (The Roaring Twenties)

But look closer and you’ll discover many sounds that will complicate our assumptions about what a “modern” industrial city sounded like. In 1930, Mr. W.C. Mansfield filed a noise complaint about an Upper West Side horse stable. That same year saw multiple complaints for rooster crowing in upper Manhattan as well as several sites in the Bronx. And in 1932, Mr. Arthur Campe of Brooklyn informed the city about one Mr. Johnson’s “noisy chickens.” New York did not just contain a diversity of sounds, but also a diversity of economies and lifestyles—both industrial and pre-industrial. Even as the jackhammering of factories and construction projects rang through the air, the neighing of horses and crowing of roosters were present as well. 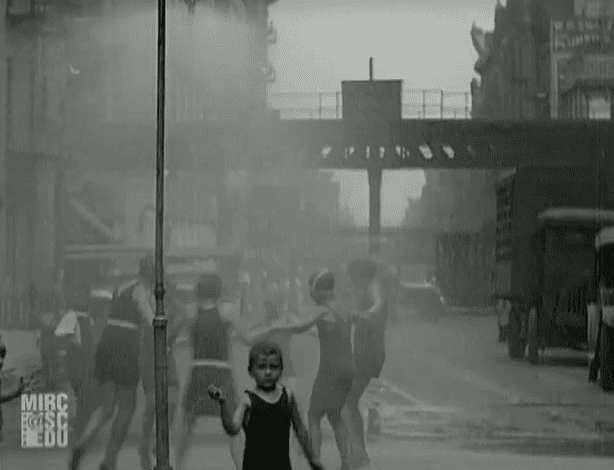 Screenshot from the video “Fire Engines, and Children at Play,” circa 1928-30 (The Roaring Twenties/NYC Dept. of Records, Municipal Archives)

Books can elegantly describe trends like industrial growth and urbanization, but “The Roaring Twenties” goes deeper by uncovering the sonic minutiae that accompanied them: a noisy bakery on Ogden Avenue in the Bronx; dairy wagons bothering J. J. Cohen each day in upper Manhattan; or the early morning racket created by live poultry aboard the NY Central Railroad cars along Riverside Drive. And these sounds are not just pieces of trivia. They exhibit people, machines and animals projecting their unique way of life into the sonic atmosphere. This compelling and very addictive site captures New York City at its noisiest, most contested and loudest.

Catch up with the latest New Archives:

The Civil War, as seen by the artists of Harper’s Weekly

And an economic, demographic and oceanic history of the trans-Atlantic slave trade