Over the past five years or so, the United States has been experiencing an enormous oil boom. Hydraulic fracturing, known as “fracking,” has made it possible—and profitable—to drill through thick rock formations, opening up vast pockets of domestic oil and gas across the country. But nowhere has this process had more of an impact than in the Eagle Ford Shale and Permian Basin of Texas and in the Bakken formation of western North Dakota. New jobs, new workers, and new money have transformed remote prairies into humming boomtowns. Wood cabins in Midland, Texas typically rent for $1,500 a month; Karnes City in south Texas plans to build a $30 million high school; and Williston, North Dakota has absorbed 15,000 workers alone. 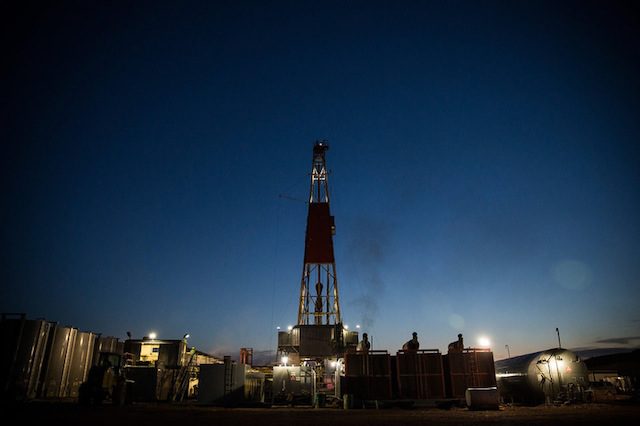 But the party may soon be over. Largely due to high American production, the international price of Brent crude has fallen below $50/barrel, a six year low.

This is not the first time America has experienced the intoxicating highs and dispiriting lows of the oil patch. Between 1901 and 1930, Louisiana, one of the first major centers of domestic oil and gas production, encountered the same dilemma at various moments. Over the course of two decades, areas of the state went from isolated swamp to tent cities of 20,000 people…and then back to isolated swamp again. As demand fell or wells just dried up, boomtowns like Homer, Ida, Vivian, and Oil City—yes, Oil City—suddenly lost their raison d’être. Their stories may augur what comes next for present day boom communities like Karnes City or Williston—and perhaps impart some lessons on how to survive the bust. 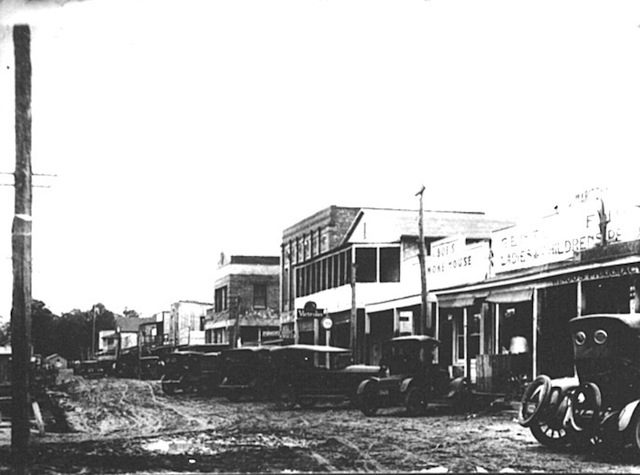 Although a great deal has changed in the oil industry over the past century, certain “boomtown” traits seem to be timeless. As production has increased in North Dakota and Texas, sprawling “man camps” of hastily built trailers quickly proliferated to house all the new workers. The migration has created a boon for local business, but also spikes in violent crime and drug addiction. When journalist Laura Gottesdiener visited Williston, ND, she found “an abundance of meth, crack, and liquor; freezing winters; rents higher than Manhattan; and far, far too many men.” The oil industry’s encroachment into rural parts of Texas and North Dakota has also dramatically changed their natural landscape. Meandering hills of prairie grass now compete with truck convoys, pipeline construction crews and perpetually dipping pumpjacks. In Williston, toxic gas flares illuminate the sky all night. 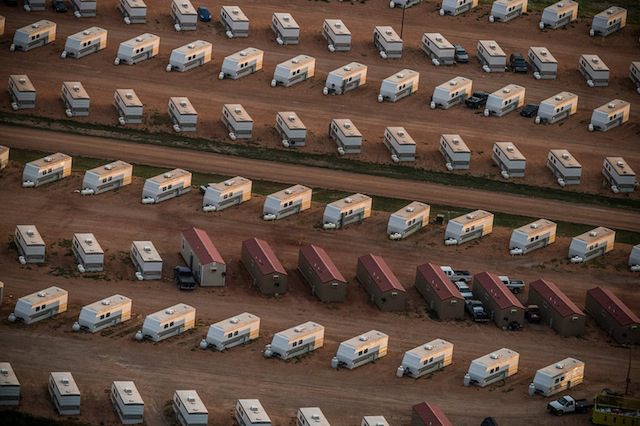 A trailer park occupied mostly by oil workers is seen in an aerial view in the early morning hours of July 30, 2013 near Watford City, North Dakota. Photo by Andrew Burton/Getty Images

The oil boomtowns of early twentieth-century Caddo Parish, Louisiana bore a striking resemblance to those of today. Located atop the highly productive Sabine Uplift, Caddo transformed from a desolate stretch of swamp to a boisterous collection of boomtowns after oil was found around 1905. Between 1907 and 1908, land prices spiked from $25-50/acre to $500-1,000. 25,000 people descended on Oil City alone. Much like in present day Williston, oil production dominated Caddo’s natural landscape. Driller Carl M. Jones remembered that so many oil wells were flaring off natural gas you could “read a newspaper at night several miles away.” 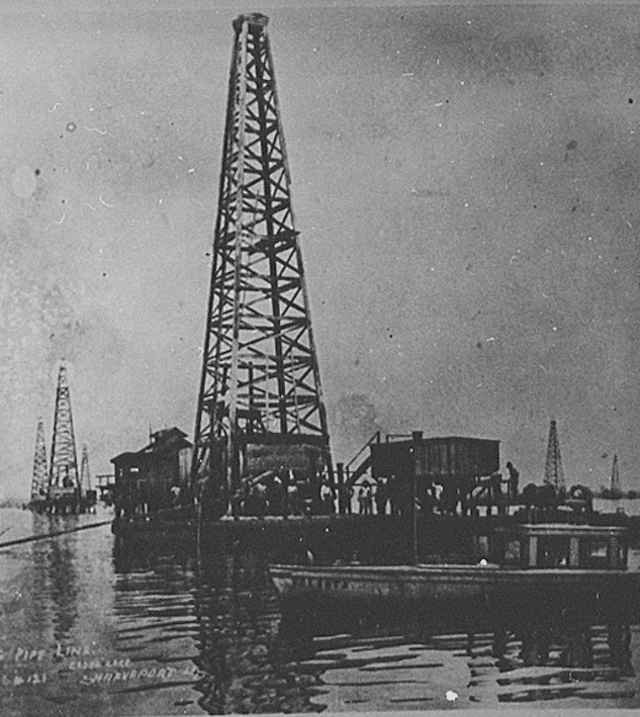 Drilling for oil on Caddo Lake

Given the enormous worker populations, housing was cheap and improvised. Driller Claude McFarland recalled that newcomers “had to live where they worked,” generally settling “all over the woods in tents.” “Main Streets” in Caddo were generally unpaved roads lined with ramshackle saloons, banks and general stores housed in shabby buildings ready to disassemble whenever the bust came. The tent cities of Caddo also became notoriously riotous. With virtually no law enforcement or civic institutions, gambling, drinking and violence prevailed. Oil City’s Reno Hill was infamous for its saloons and “hotels” of ill repute. Madams with aliases like Diamond, Oklahoma Mamie, Big Alice, and Old Mooch became experts at selling liquor and sex to the huge market of wage earning men who were either unmarried or far from their families. 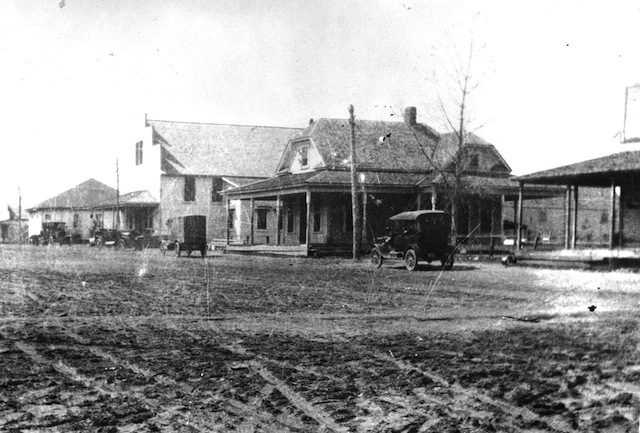 Eventually, the drinking and violence became so extreme that Mike Benedum and Joe Trees, prominent oilmen with considerable interests in Caddo, decided to build Trees City, an enclave of comfortable, brick homes that would encourage more wholesome family-oriented lives among the workers. Drinking, gambling, and “loose women” were strictly forbidden. But Benedum and Trees’s efforts to control their workforce had only mixed results. When they hired a former Texas Ranger to shut down Caddo’s whiskey and prostitution rings, the bootleggers simply bribed him to look the other way. 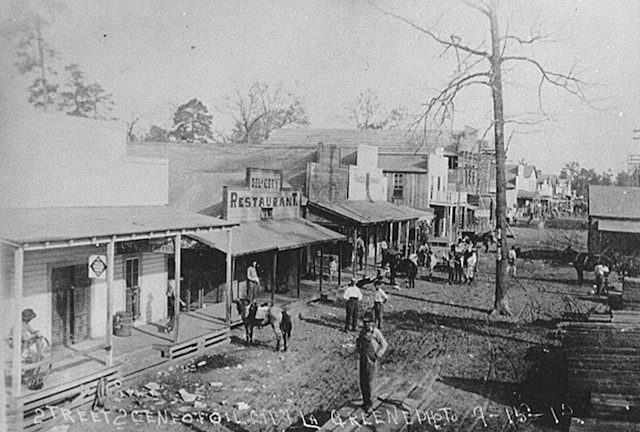 Law enforcement tied drunks to tree in the center of Oil City until they were sober, September 15, 1912.

So how did these communities respond when the bust came? In many cases, the loss of oil revenue was devastating. When demand for commodities fell across America during the Great Depression, Caddo’s boomtowns had little to cushion the fall. Most of the new infrastructure built over the past two decades specifically related to oil and gas—pipelines, storage tanks, refineries—and had only limited applications in other fields. Most of the investors, lease hounds and oil workers left town, many in search of the next boom in Texas or Oklahoma. As Longtime Jennings, Louisiana resident J.M. Hoag recalled it, once “the oil started to slow down…the money mongers left with it.” 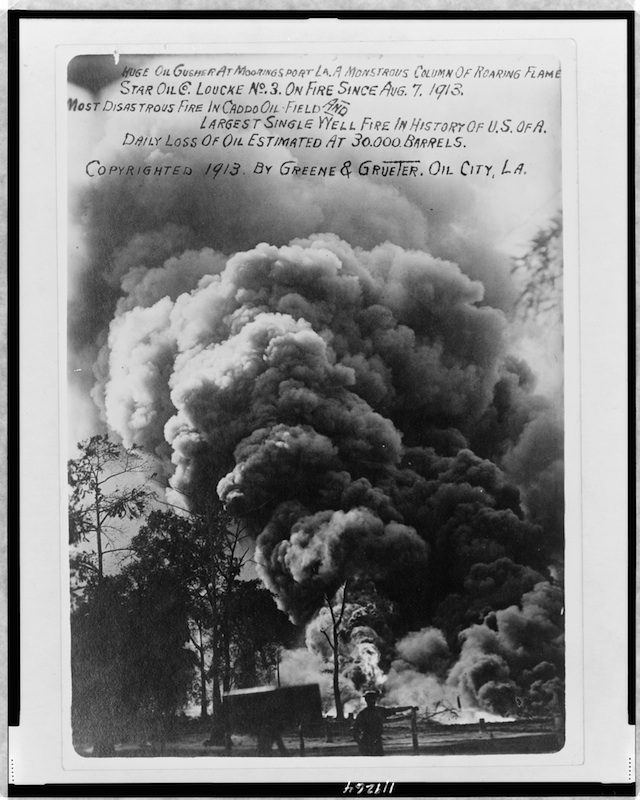 Businesses reliant on those wages left as well. After revenues in Jennings—the site of Louisiana’s first oil well—declined, a country club and opera house catering to oilmen promptly shut. Hotels housing all the newcomers to the oil patch could no longer fill their rooms. Even the women of Reno Hill moved on once the market changed. Just as oilmen crisscrossed from boomtown to boomtown along the Sabine Uplift, female sex workers migrated along their own parallel network, an “interrelated community of vice” as one author called it.

This isn’t to say that there aren’t positive lessons to glean from Louisiana’s early boom days. The most obvious advice is for local governments to save while the oil is profitable—Norway is a great example of this virtue. Having a diverse local economy is another. In 1901, Jennings became the first zone of modern oil production in Louisiana, only to peak just five years later. But local jobs in rice production and transportation pre-existed the oil boom—and continued to keep many families afloat after the bust. Today, Jennings is a handsome, small town of 10,000. In contrast, Trees City, once a testament to the sturdy prosperity that oil created, gradually reverted back to a remote patch of bayou. Some privately owned pumpjacks still dot the landscape today, but only produce a fraction of the heady boom days. By remaining an oil-centered economy, Trees City had no way of coping when the bust came. 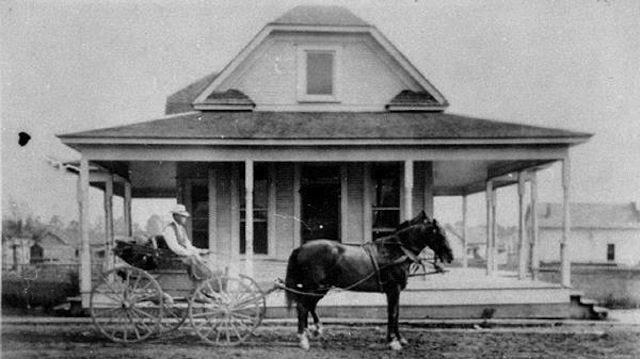 Many present day boomtowns have applied such lessons. Karnes City, Texas has actively prohibited bars and “man camps” from its city limits, instead channeling oil revenues into local schools, a new city hall, and a convention center that will hopefully pay long term dividends. Even the wild and rowdy Williston has begun investing in sewer improvements, a new recreation center and limiting permits for the construction of new “man camps.” Nonetheless, these boomtowns will still feel the pinch of fewer jobs, smaller government coffers and higher unemployment. That much is probably unavoidable. 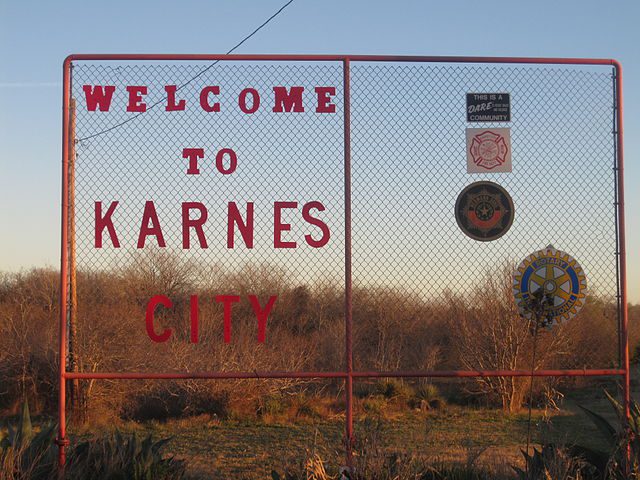 And when the bust does come, perhaps Williston, Karnes City, and other oil patch communities will direct their energies towards reinvesting in their natural landscape. Years of breakneck growth in oil production have severely impacted local environments: farmland made fallow from contaminated wastewater; toxic oil spills; higher prevalence of earthquakes. And this is to say nothing of the global issues that accompany pumping yet more carbon into the atmosphere. I don’t want to be naïve—restoring grasslands and watersheds won’t sustain the 2.8% unemployment that North Dakota has been enjoying (the lowest in America). But it might provide a well-needed respite from the excesses—both social and environmental—that tend to follow in the wake of America’s oil boomtowns. 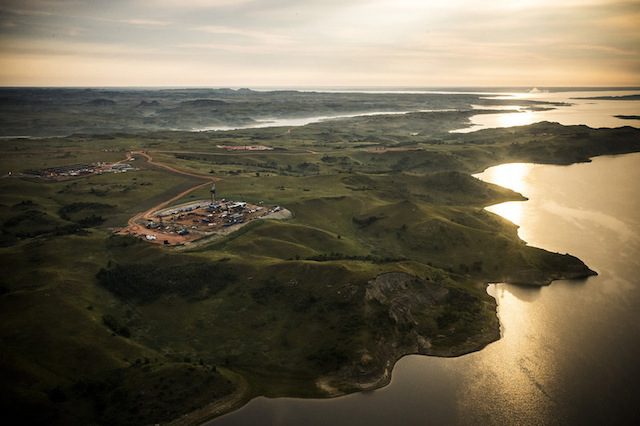 An oil drilling rig is seen in an aerial view in the early morning hours of July 30, 2013, North Dakota. (Photo by Andrew Burton/Getty Images)

Henry Wiencek’s piece on the history of Standard Oil in Louisiana and his discussion of John D. Rockefeller and the Standard Oil Company on 15 Minute History.

All Images of North Dakota courtesy of Andrew Burton/Getty Images, via Denver Post