In 1854, a fleet of American naval ships arrived in Japan’s Tokyo Bay. The squadron, led by Commodore Matthew C. Perry, was charged with the mission of convincing the Tokugawa shogunate to open commercial and diplomatic ties with the West. Beginning in the mid-17th century, the island’s feudal leaders enforced an economic, political and cultural isolation, allowing no contact with foreigners in order to preserve traditional Japanese society. After a series of tense negotiations between Japanese and American officials, including indications from Commodore Perry that his ships were willing to use force, both sides ratified the Kanagawa Treaty, also known as the Convention of Kanagawa, which officially opened Japan to international trade and diplomacy.

Kathleen Ran’s Texas History Day paper, “The ‘Knock Knock Who is There’ Moment for Japan: The Signing of the Treaty of Kanagawa in 1854,” explores the historical impact of this watershed agreement on Japanese society. She argues that significant political, economic and cultural changes took place as a result: 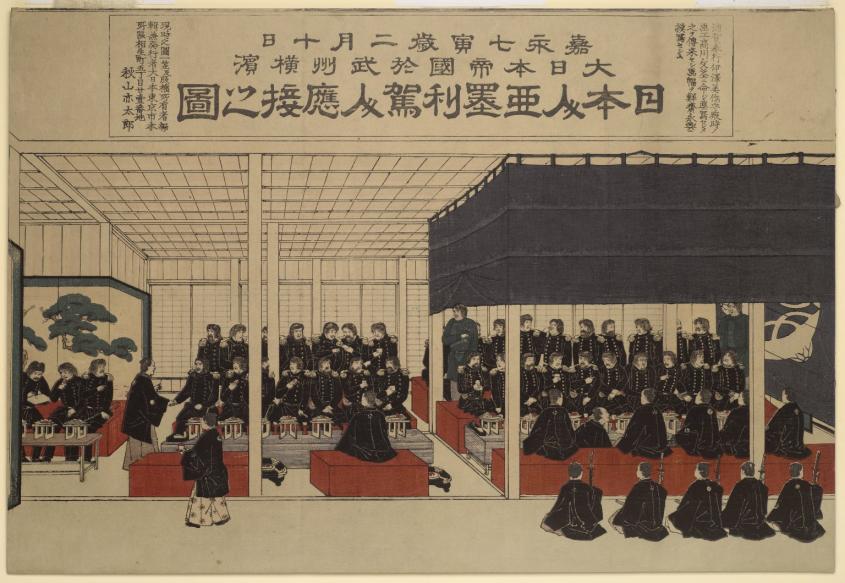 Woodblock print portraying an 1854 meeting between Commodore Perry, his officers and Japanese noblemen, circa 1887 (Image courtesy of the Brooklyn Museum)

“The Americans came to Japan and sought access to ports and friendship. They got what they wanted through the Treaty of Kanagawa. The Japanese were reluctant and in some ways were dragged to the treaty table. However, the treaty later turned out to be very profitable to Japan. The Treaty of Kanagawa was primarily responsible for the rapid transformation of Japan from an isolated and feudal empire to one of the world’s most powerful and successful nations.” 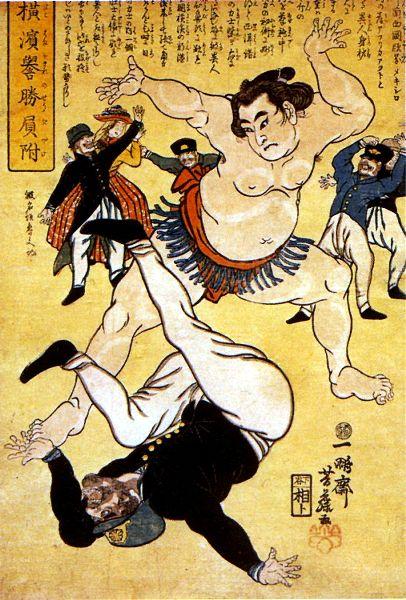 The opening of Japan stirred a negative reaction from many segments of Japanese society. This 1861 woodcutting reflects such sentiments, depicting a traditional sumo wrestler throwing a foreigner to the ground. (Image courtesy of Wikimedia Commons)

“Before the treaty came into effect, the country was far behind in areas of technology, economics and entirely shunned foreign relations. Now, though, Japan is among the world’s cutting-edge producers of technology and an integral part of the world community. The Treaty of Kanagawa opened the door of Japan and initiated the nation’s transformation from a feudal empire to a modern world power; therefore, it was a turning point in history.”